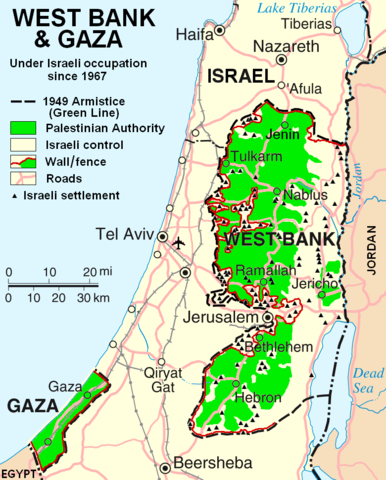 Ann Arbor (Informed Comment) – CNN has fired contributor Marc Lamont Hill for a speech he gave on Palestinian rights at the UN. The speech can be found here.

You can protest this outrageous firing at this petition site.

And here is a link to his book, Nobody: Casualties of America’s War on the Vulnerable, from Ferguson to Flint and Beyond, which everyone should buy and read.

CNN would have been under special pressure to fire Hill because he is a prominent African-American intellectual with a following in his own community, and the Israeli Ministry of Strategic Affairs (the propaganda arm of the Likud government) is worried about the boycott and sanctions movement spreading among American minorities who might sympathize with the oppressed Palestinians.

In his speech, Hill carefully explained all the ways in which Israeli Apartheid practices (my word, not his) devastate the basic human rights of the 5 million Palestinians living under Occupation. Not only are the 20 percent of Israeli citizens who are of Palestinian heritage second class citizens (and, increasingly, third class citizens), but those kept under the jackboot of the Israeli military in the Palestinian West Bank and in Gaza are kept stateless and without even the right to have rights.

These crimes, epochal and unparalleled in our own time, are being committed by Binyamin Netanyahu and his henchmen in plain sight, violating every principle of agreed-upon international law in the post-1945 period. (I say unparalleled because I know of no other government on earth in the 21st century deliberately keeping millions of persons stateless and depriving them of citizenship. Some countries give minorities a citizenship many of the latter do not want, but they still do have a passport and property rights). Israel occupied the Palestinian West Bank and the Gaza Strip in 1967 and refuses to relinquish them or grant citizenship to the inhabitants, ensuring they remain in the twilight zone of statelessness. They are by far the largest stateless population in the world, (Undocumented migrants are not stateless since they have citizenship in their home country). The Nazis made Jews stateless as a prelude to the Holocaust.

One way that the Israeli right wing gets away with these atrocities is to use techniques of blackballing, smearing, and propaganda to marginalize any voices they don’t like. Jewish American mainstream organizations like the Jewish Community Federation of San Francisco secretly have created web sites and techniques for getting people fired or blocking their career advancement if they aren’t on board with Israeli colonization of the Palestinian West Bank. Canary Mission is even now targeting our undergraduate students, hoping to blight their lives for taking a stand for justice. I do not believe it is too much to say that Canary Mission is evil.

Pro-Israel bigots in the United States who freely speak about Arabs as “animals” or speak of “filthy Arabs” suddenly develop a saintly halo and accuse anyone who points to Netanyahu’s systematic dispossession of the Palestinians of being an anti-Semite. And they’ve been remarkably successful in marginalizing anyone who takes them on. They connive at unelecting congressmen and -women, they block appointments to the Federal government, and organize massive letter-writing campaigns to news outlets to pressure them into firing and blackballing journalists or changing the way they speak about Israeli colonizing activities. (The organization “CAMERA” targets journalists in particular).

This success is not because “Jews” are “powerful.” First of all, only a minority of Jewish Americans sympathize with the far right politics of the Likud Party. Jon Stewart used to complain tongue in cheek that if Jews were so powerful he ought to have been able to get off basic cable and have a network show.

The success is because right wing white people are so powerful, and many of them still have a latent belief in the goodness of colonialism and in the White Man’s Burden. Melanie McAlister argued brilliantly that for right wing Christian whites in the United States, the Israeli domination of the Palestinians is a symbolic reenactment of the Vietnam War, in which this time the “white people” (as they characterize themselves) win instead of losing. I.e., Israel functions as did those old Rambo movies. I was shocked to discover that my opposition to Bush’s Iraq War and critique of it as neo-colonialism was offensive to the Northeast power elite because they supported the war and apparently couldn’t deal with their unfaced assumption of racial superiority over Iraqis.

On the other side, a Christian Zionist such as Rick Santorum is paid to go on CNN and say things like, “If they want to negotiate with Israelis, and all the people who live in the West Bank are Israelis, they’re not Palestinians. There is no ‘Palestinian.’ This is Israeli land.”

That is all right in White America, but substitute Palestinians for Israelis and vice versa in Santorum’s vile quote and imagine what would happen to someone who said *that* on t.v.

Hill was raked over the coals by the bigoted and racist Israel lobbies for saying this:

“we have an opportunity to not just offer solidarity in words but to commit to political action, grassroots action, local action, and international action that will give us what justice requires. And that is a free Palestine from the river to the sea.”

You will notice that Palestine, i.e. the Palestinian West Bank and Gaza (the Green parts), stretches from the river to the sea:

It is interrupted by Israeli territory in between, of course.

Dishonest propagandists accused Hill of using the language of Hamas, which rejects Israel and has said, “Palestine is ours, from the river to the sea and from the south to the north.” But you’ll note that Hill did not say anything about north to south.

Hill admittedly does not think a two-state solution is any longer plausible. But what he was calling for was for the people living in the Occupied territories to be full citizens, and to have these citizenship rights pertain to everyone living between the river and the sea. He did not say anything about Israelis not having equal rights.

It is not a firing offense to ask for Palestinians living between the river and the sea to enjoy the full rights of citizenship. In fact, Yitzhak Rabin and Shimon Peres pledged exactly that. Rabin shook Yasser Arafat’s and Bill Clinton’s hand over it on the White House lawn. Rabin was later assassinated by the sort of person now howling for Hill’s blood. Rabin’s vision of a Palestinian state and a two-state solution may well be impossible. That outcome has been engineered by Netanyahu and his thugs. But whatever the diplomacy, it cannot be allowed to keep Palestinians stateless and virtually without secure rights forever.

Hill was also slammed for urging Palestinian activism to oppose the Occupation. One of the standard Israeli propaganda techniques is to equate any resistance to their frankly fascist techniques of social control imposed on the colonized Palestinians with “terrorism.” There is nothing new or strange about this. The British in India considered Gandhi a terrorist. Of course the colonial state views opposition as terrorism.

That same dishonest columnist at The Forward managed to reconfigure Hill’s activism as violence. The fact is that international law recognizes the right of occupied peoples to mount even violent resistance to occupation militaries. But that isn’t what Hill was calling for. And then, any violence is then twisted around as violence toward civilians. And there you have it. Terrorism.

The Likudniks don’t actually want nonviolent resistance. That prospect horrifies them since they can’t do a magic circle number on it. When Mubarak Awad tried to start a center for Palestinian nonviolent resistance on the West Bank, the Israeli government illegally expelled him from his own home. One of the reasons the Israeli army is just shooting down unarmed Palestinians in cold blood inside Gaza is that they want to create the image of a violent confrontation where there is none (the marches have not involved clashes with the Israeli army).

CNN does a criminally negligent job of covering Palestine, giving us little better than Israeli propaganda. For the most part, it shapes the presentation of the story by simply ignoring it. But it also shapes the story with a systematically biased language intended to demonize the Palestinians and exonerate Israeli crimes against humanity.

Last March when Palestinians imprisoned in the open air concentration camp of Gaza by the Israeli army, navy and air force– and blockaded from key commodities– began marching to draw attention to their imprisonment, the Israeli Prime Minister Binyamin Netanyahu and his officer corps decided to deal with these protests by shooting down unarmed protesters, many of them women and children, with live fire, on the Gaza side of the border. Using live ammunition on protesters is a war crime. All the civilized countries in the world should have withdrawn their ambassadors and slapped severe economic sanctions on the Netanyahu regime in response.

CNN’s reporting on one of the first such Israeli crimes? “Gaza: 17 Palestinians killed in confrontations with Israeli forces – CNN”. That makes it sound as though the dead Palestinians had come over to the Israeli side of the border and attacked Israeli “forces” (Israel has an army, let us call it an army). But there is a problem with this framing. Those shot down were on the Gaza side of the border and there has been no direct physical encounter with Israeli troops. The dozens of Palestinians shot down in cold blood and the hundreds shot and injured in these demonstrations since March have largely gone unreported at CNN. Otherwise there’d be a segment every Friday afternoon.

In the first six months of the ongoing weekly rallies, Mezan reported that “150 Palestinians have been killed in the demonstrations. At least 10,000 others have been injured, including 1,849 children, 424 women, 115 paramedics and 115 journalists. Of those injured, 5,814 were hit by live ammunition…”

Amnesty International notes that many of the injuries inflicted on the protesters are to lower limbs and that:

“According to military experts as well as a forensic pathologist who reviewed photographs of injuries obtained by Amnesty International, many of the wounds observed by doctors in Gaza are consistent with those caused by high-velocity Israeli-manufactured Tavor rifles using 5.56mm military ammunition. Other wounds bear the hallmarks of US-manufactured M24 Remington sniper rifles shooting 7.62mm hunting ammunition, which expand and mushroom inside the body.

The nature of these injuries shows that Israeli soldiers are using high-velocity military weapons designed to cause maximum harm to Palestinian protesters who do not pose an imminent threat to them. These apparently deliberate attempts to kill and maim are deeply disturbing, not to mention completely illegal. Some of these cases appear to amount to wilful killing, a grave breach of the Geneva Conventions and a war crime.”

This United Nations set of reports is what the real news from the Occupied Territories looks like.

If Netanyahu could shut the UN up, he would. His minions have shut up Marc Lamont Hill, a brave voice for freedom and human rights in our time who will now be replaced by the Rick Santorums.

Marc Lamont Hill Speaks at the UN about Palestinian Rights