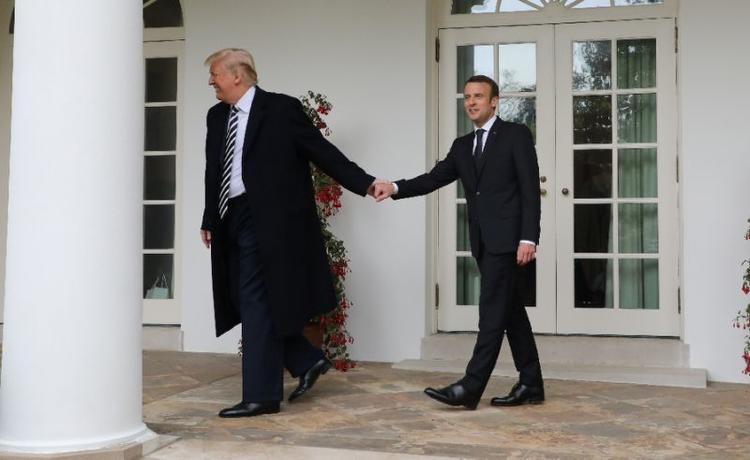 In a sign of the growing diplomatic rift between the two leaders, Macron said “I deeply regret the decision” by Trump to pull out US troops.

Trump last week ordered a complete troop pullout from Syria, asserting that the Islamic State group had been defeated, as well as a significant withdrawal from Afghanistan.

Analysts said the momentous reversal of years of US foreign policy will leave the war-torn regions at risk of continued and potentially heightened bloodshed.

France has said it will maintain its participation in the coalition fighting IS in Syria.

“To be an ally is to fight shoulder to shoulder,” Macron said in Chad’s capital N’Djamena with his Chadian counterpart Idriss Deby, adding that France was doing just that in the fight against jihadist groups in Chad.

The US troop pullout in Syria will leave thousands of Kurdish fighters in northern Syria — which the Pentagon spent years training and arming against IS — vulnerable to Turkish attack.

Turkey, which fears the separatist ambitions of Kurds in its own country, has threatened to launch another offensive against Kurdish groups in Syria that Ankara accuse of being “terrorists”.

On Saturday, a senior Kurdish official called on the US to prevent a potential Turkish offensive, calling it America’s “duty to prevent any attack and to put an end to Turkish threats”.

– Once a ‘special relationship’ –

In his remarks Macron also paid tribute to Defense Secretary James Mattis, who announced he was resigning on Thursday after Trump told the world about his Syria U-turn.

“I want here to pay tribute to General Mattis… for a year we have seen how he was a reliable partner,” Macron said.

Mattis, 68, was one of Trump’s first cabinet picks and has spent nearly two years at the Pentagon.

In his resignation letter Mattis made clear that Trump’s world view was irreconcilable with his own.

French president Emmanuel Macron criticised the US Syria pullout announcement during a visit to Chad’s capital N’Djamena, alongside his Chadian counterpart Idriss Deby
“My views on treating allies with respect and also being clear-eyed about both malign actors and strategic competitors are strongly held and informed by over four decades’ immersion in these issues,” Mattis wrote to Trump, who has sought closer ties with Russia and heaped contempt on NATO and other alliances.

“Because you have the right to have a Secretary of Defense whose views are better aligned with yours on these and other subjects, I believe it is right for me to step down from my position.”

Brett McGurk, the US special envoy to the anti-IS coalition, also announced he would bring his departure forward from February due to the Syria policy change.

Since Trump became president, Macron has attempted to develop a “special relationship” with the billionaire tycoon despite widely differing political beliefs and styles.

The pair had seemed to share a special camaraderie in the early days of their respective presidencies, a “bromance” of sorts that included patting and playful banter.

But differences over policy — in particular the Paris climate accords which Trump opposed — have become increasingly hard to paper over and tensions in their relationship have become more apparent.

Even early on, when Macron and Trump shared a handshake at their first meeting at a NATO gathering in Brussels in May 2017, photographers focused on the white-knuckle grip of the presidents’ handshake as the two tried to out-muscle each other.

After Trump pulled out of the Paris climate accords, Macron played on the words of Trump’s electoral slogan “Make America Great Again”, instead saying “Make Our Planet Great Again”.

But Trump raised eyebrows when attempting to compliment Macron’s wife Brigitte by telling her she was “in good shape”.

In April, Macron visited Washington and the powerplay between the two was again evident to see, with Trump appearing to flick a piece of dandruff off Macron’s jacket on national television, saying “we have to make him perfect. He is perfect.”

Later, despite Macron repeatedly appealing to Trump to preserve the Iran nuclear deal, Trump exited the multiparty agreement negotiated by his predecessor Barack Obama and reimposed punishing sanctions on the Iranians.

Then in November, Trump publicly lambasted Macron and mocked the French president’s approval rating over remarks about Europe taking greater responsiblity for its own defence.

On Sunday Macron indicated his own disappointment at the frayed relations with the US.

“An ally must be reliable, to coordinate with its other allies,” Macron said.