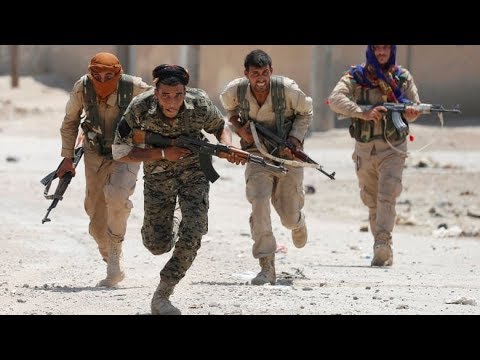 US President Donald Trump’s dramatic decision to withdraw troops from Syria has been condemned by fellow members of the international coalition and Washington’s Kurdish partners on the ground, the Syrian Democratic Forces (SDF).

Declaring in a tweet that Daesh militants had been defeated in Syria, Trump overrode his top national security aides, blindsided US ground commanders and stunned lawmakers and allies with his order that all 2,000 US troops must leave Syria within the next 100 days, a decision that upends American policy in the region.

France, a leading member of the international coalition, confirmed last night that it would keep its troops in Syria, as militants continue to pose a threat to French interests.

“It shows that we can have different priorities and that we must count on ourselves first,” Europe Minister Nathalie Loiseau told C-News television. “For now, of course we are staying in Syria because the fight against Islamic State [Daesh] is essential.”

In a statement released earlier today the UK Foreign Office also stressed that Daesh had not been defeated and whilst progress had been made, the group remained a threat even within limited territory.

“We remain committed to the Global Coalition and the campaign to deny Daesh territory and ensure its enduring defeat, working alongside our critical regional partners in Syria and beyond,” a spokesman said. “As the situation on the ground develops, we will continue to discuss how we can achieve these aims with our Coalition partners, including the US.”

The decision was also slammed by the SDF, who have conducted much of the ground work alongside US-led air strikes, as a “stab in the back” and a “betrayal”.

“The war against Islamic state has not ended and the Islamic State has not been defeated,” the statement read, adding that any withdrawal would “create a political and military vacuum in the area, leaving its people between the claws of hostile parties.”

The decision came as a surprise to many US officials working on the Syrian conflict, who only last week had suggested that American forces would remain in the country for some years in order to ensure the region was stable. Yesterday six senators, including Lindsey Graham who recently returned from visiting the SDF, signed a letter to the president, pleading with him to reconsider.

“The withdrawal of American presence from Syria also bolsters two other adversaries to the United States, Russia and Iran … Your administration must not repeat the same mistakes that previous administrations have made and concede to these bad actors,” the letter concluded.

The move was also criticised by Israeli officials who warned that it would help Russia and arch-enemy Iran expand their influence in Syria. Prime Minister Benjamin Netanyahu told reporters that Tel Aviv would escalate its fight against Iranian-allied forces in the country: “We will continue to act very aggressively against Iran’s efforts to entrench in Syria. We do not intend to reduce our efforts. We will intensify them, and I know that we do so with the full support and backing of the United States.”

Russia praised Washington’s decision, with the Ministry of Foreign Affairs stating that it would help achieve a political settlement in the country.

Turkey has yet to release an official response to Trump’s announcement, but is expected to welcome the move having long called for the US to halt its support for Kurdish People’s Protection Units (YPG), which it sees as an offshoot of the designated terror group, the Kurdistan Workers’ Party (PKK).

The lira strengthened by the most in a month as the news broke yesterday, with a US official attributing Trump’s change of heart to a phone call he had with Turkish President Recep Tayyip Erdogan last week. The move also comes following confirmations from Ankara that Turkish forces are still planning to launch an operation in the coming days against the YPG, with President Erdogan vowing to “bury them in the ditches they dig”.

Amid the surprise at the rapid decision to withdraw troops, the White House stressed yesterday that the US would still play a role in the Global Coalition, and hinted that the US-led airstrike campaign would continue.

“These victories over ISIS [Daesh] in Syria do not signal the end of the Global Coalition or its campaign. We have started returning United States troops home as we transition to the next phase of this campaign,” White House spokeswoman Sarah Sanders told reporters.