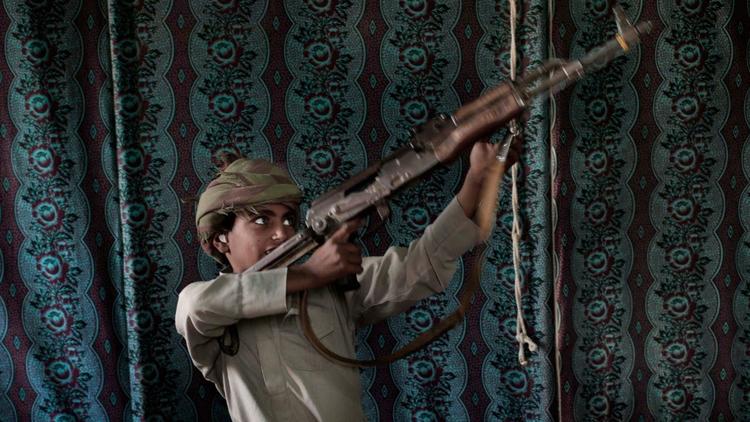 David Kirkpatrick of the New York Times caused an international stir by estimating that 20 percent of Sudanese fighters in Yemen may be 13-17, i.e. child soldiers. The percentage may be as high as 40%.

That these child soldiers appear to have been paid for by Saudi Arabia at a time when, because of the murder of dissident journalist Jamal Khashoggi, Saudi Arabia is in bad odor anyway, contributed to the sensation. Virtually every Arabic newspaper and news site is leading with the Times story.

Opposition to the US role in supporting Saudi Arabia and its allies in the war on Yemen’s Houthi rebels has grown, as the UN has announced that 10 million Yemens out of 28 million are in danger of starving to death if the war goes on.

That the Saudi commanders were too afraid to go anywhere near the front in Yemen and just gave cell phones to Yemeni commanders, according to Kirkpatrick, underlines that there are very few Saudi or UAE ground troops in Yemen, since the Saudi strategy is to bombard safely from the air and to do so indiscriminately, without regard for human welfare.

Sudan, a country of 40 million with a GDP of only $110 bn., is said to have 10,000 fighters in Yemen, with the first contingent entering at Aden in October of 2015, about six months after the Saudis launched their air war on Yemen.

The vast majority of these fighters are not regular army troops but Janjawid mercenaries from Dar Fur (“Rapid Support Forces”) whose salaries are paid by Saudi Arabia and the United Arab Emirates. Sudan leader Omar al-Bashir is said to have demanded from these Gulf countries $2 billion for every 1,000 Sudanese troops deployed in Yemen.

As the Sudanese economy has been hit by high rates of inflation this year, provoking anti-government crowd action in the past few weeks, the attraction of having Gulf money come over for Sudanese participation in the Yemen War has grown.

Last spring, the Houthi rebels killed “dozens” of the Sudanese mercenaries in a single engagement.

As a result, parliamentarians and families of dead or wounded fighters put pressure on the government to withdraw from the war.

In late May, 2018, Sudan’s SUNA reported that Minister of Defence Lt.-Gen Awad Mohamed Ahmed Bin Auf reaffirmed Sudan’s commitment to contributing army troops to the Yemen War, after having told parliament earlier that month that his government was reevaluating its commitments.

During May, did money come in from the Gulf sufficient to change Lt.-Gen. Bin Auf’s mind?

Sudan Radio reported on 5 June 2018 that Sudanese president Omar al-Bashir visited Saudi Arabia to discuss the issue of Sudanese troops fighting in Yemen as part of a coalition force attempting to roll back the Houthi militia. (-BBC Monitoring). Bashir must have known about the Fur child soldiers Saudi was deploying.

On Nov. 11, the Houthis said that they had captured dozens of Sudanese irregulars.

On Nov. 13, 2018,some 20 Sudanese fighters from the irregular Sudanese force, called ‘Rapid Support Force,’ were killed and over 100 wounded when they were struck by a Houthi missile near the port of Hudeidah. Dabanga noted that “Sudanese press were informed that 17 bodies of RSF fighters participating in the Saudi-led military coalition in Yemen have arrived in Nyala, capital of South Darfur, on Sunday.”

This report probably concerns the child soldiers, since the unit is clearly an irregular one and the soldiers were from Darfur. That is, the 20 dead were likely Fur child soldiers.