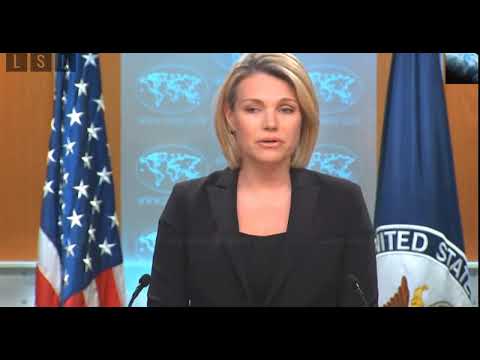 Ann Arbor (Informed Comment) – Trump is making Heather Nauert his ambassador to the United Nations, the most empty-headed such appointment since W. Bush tried to shoehorn the crazed John Bolton into that position. In recognition that Nauert is a lightweight, Trump is demoting UN ambassador from being a cabinet-level position. This means Nauert won’t be able to call principals’ meetings of people like the Secretary of State or the Secretary of Defense when there is a global crisis affecting the welfare of the United States.

Nauert is Trump’s mini-me, aping his shell-shocked insouciance at atrocities and struggling to understand the simplest questions.

Nauert emerged as a Fox Cable News personality and was, predictably, picked up by Trump from there to be State Departments spokesperson. Her main qualification was flattery of Trump.

To plumb the depths of Nauert’s ignorance about international affairs it would be necessary to deploy the Deepsea Challenger (DCV 1) that director James Cameron used to reach the deepest part of the Mariana Trench at the bottom of the Pacific Ocean.

Notoriously, when speaking of the good relations between Germany and the United States, she not only (correctly) cited the Marshall Plan but went on to bring up D-Day, when US troops landed at Normandy Beach in the face of German machine gun fire.

But while simple ignorance can be laughable, it can after all be repaired in someone wants to put in the work of, like, cracking a book or doing some research.

What is truly worrisome is that Nauert has that same sadistic streak that runs through Trump and Trumpism, to the extent of simply not caring if children are killed.

Take, for instance, this exchange about the Saudi droning to death of children in a schoolbus in Yemen:

I just don’t get a sense from these remarks that she was horrified at this killing of children, and she seems to have been much more interested in running interference for Saudi Arabia’s total war on Yemeni civilians. Some 85,000 children have died of starvation in Yemen. She actually excused the droning of a schoolbus on the grounds that the Houthis have fired some ineffectual rockets toward Saudi Arabia. The Saudis have bombed Yemen intensively, whereas Houthis have no air force.

Then there was that time, which the Russian propaganda outfit Sputnik picked up on, when Nauert caused an international incident by mixing up the Kurdistan Workers Party (PKK), which the US considers a terrorist organization, with the YPG, the Syrian Kurdish militia that is America’s main ally on the ground in Syria fighting ISIL. Nauert rightly protested the Turkish invasion of Afrin last winter, a Syrian Kurdish enclave. But she slipped up and said that Turkey went in after the PKK. That is what Turkey would have said, since it does not recognize that the YPG is a separate, Syrian organization which does not have a line of command to the PKK. The US has made itself blue in the face defending the YPG Syrian Kurdish militia as good guys fighting extremism who have nothing to do with the (allegedly) terrorist PKK. And here comes Nauert, saying that the Afrin Kurds are PKK (which would have legitimated the very Turkish invasion she was condemning).

We live in a country where seasoned diplomats like Chas Freeman cannot serve on the National Security Council because they object to Israel’s colonization of the Palestinian West Bank. But ignoramuses like Nauert who excuse Saudi massacres and don’t know which Kurds the Pentagon is supporting are easily appointed to high office where they can do a shitty job of representing the United States to the world community. As the aftermath of crises like the Iraqi invasion of Kuwait in 1990 or the September 11, 2001, attacks showed, diplomacy is key to America’s ability to face global challenges. Nauert isn’t capable of diplomacy, just of mouthing off in imitation of Trump’s Twitterhea.