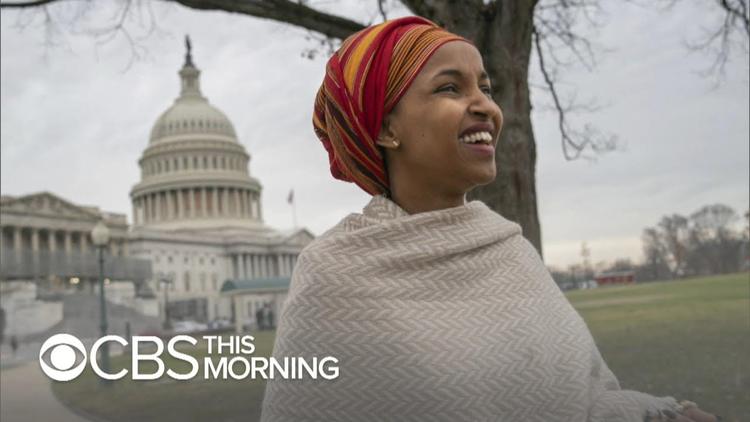 Ilhan Omar marked her first day in office by promising to make the US live up to its ideals of religious liberty, and she demanded the country reject divisiveness and hate, Anadolu Agency reports.

Omar was sworn into the House of Representatives on Thursday, and joined Michigan’s Rashida Tlaib in becoming the first Muslim women in Congress. Omar is also the body’s first Somali-American member.

“I am feeling very honored and really humble to represent the people of the 5th and get this opportunity to really work on restoring our democracy and fighting for the people,” Omar told Anadolu Agency, referring to Minnesota’s 5th district.

The 36-year-old Omar used her grandfather’s copy of the Quran during her swearing-in ceremony, saying he inspired her to pursue a career in politics.

“I know he would have loved to be here today. But I want to bring him with me. He was with us in spirit because I got a chance to get sworn on his Quran,” Omar added.
An outside view of office of Democratic Representative elect from Minnesota Ilhan

She also wore a hijab for the ceremony — another first for Congress that previously banned any sort of headwear.

“We are going to make this country one that lives up to its ideals of inclusion, of religious liberty,” Omar said to a crowd of supporters Thursday at a celebration after her swearing in. “One that recognizes this is a land that is stolen from indigenous people, built on the backs of black slaves, and one, one that welcomed immigrants so many years ago.

Omar commended the diversity in the new Congress that now has 102 women and 55 black members. The new legislative body also sees the first Native American women as well as two of the youngest members in history.

The congresswoman reflected on her roots as well, when she came to the US more than two decades ago as a refugee.

“Not only do we welcome refugees, but we send them to Washington to represent us,” she added, praising her district.