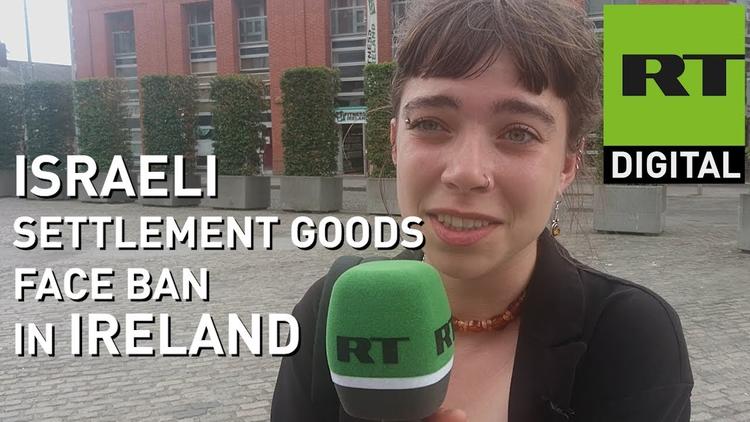 Ann Arbor (Informed Comment) – Ireland’s parliament has voted by 78 votes to 45 to ban the importation into Ireland of goods produced by Israeli squatter firms in the militarily Occupied Palestinian West Bank.

Since the 1967 war ended in 1967, Israel’s continued occupation of the Palestinians (who did not participate in the 1967 war, as Moshe Dayan admitted), is by now highly illegal and it should withdraw. In any case, its transfer of hundreds of thousands of Israeli citizens to the Palestinian-owned West Bank is a major breach of international law, going beyond a mere war crime in its massive and repetitive nature, and constituting a crime against humanity.

The bill originally had been introduced in the senate by Independent Senator and pop singer Frances Black. She was pleased at its second stage passage, saying that it was in accord with international law and the law on human rights.

Embed from Getty Images
Irish singer and politician, Frances Black, during the ‘Jobstown – Assembly For Justice – Protest Is not A Crime.’ On Saturday, April 1, 2017, in Dublin, Ireland. (Photo by Artur Widak/NurPhoto via Getty Images).”

Marie O’Halloran at the Irish Times quoted Black as saying, “By trading in settlement goods we are helping to sustain this injustice. How can we condemn these settlements as illegal, as theft of land and resources, but happily trade in the proceeds of this crime?”

Caoimhe de Barra, the head of Trocaire (the Catholic Church of Ireland’s overseas development agency), saw the parliament vote as a “positive step,” O’Halloran writes, for “justice, accountability and international law.” De Barra said that the international community “can no longer continue to condemn settlements as illegal while simultaneously economically supporting them.”

The Irish executive did not support the bill, and several cabinet members voted against it or abstained, fearing a backlash from Israel that might damage Irish relations with the United States because of the influence of the Israel lobbies in the US Congress. (The GOP dominated Senate in Washington, DC, has three times attempted to pass a bill authorizing US states to refuse to do business with contractors who boycott Israel over its colonization of the Palestinian West Bank, giving this measure, which failed, priority over paying nearly 1 million Federal workers now furloughed.)

The governing center-right Fine Gael party, however, leads a minority coalition and was outvoted on this measure.

The Irish Times reported that Niall Collins, who holds the foreign affairs portfolio in the opposition Fianna Fáil party and who tabled the bill in the lower house of parliament or “Dáil,” rejected the notion “that we are now being offensive to corporate America”. He noted that the US apartment-sharing giant AirBNB had pulled out of the Occupied West Bank.

The far right wing Israeli government, of course, threw a hissy fit, hurling accusations of anti-Semitism and irrational hatred for Israel at Ireland, and recalling its ambassador from Dublin. The former minister of defense Avigdor Lieberman, himself from Moldova, demanded that Israel sever diplomatic relations with Ireland.

Embed from Getty Images
JERUSALEM, ISRAEL – NOVEMBER 14: (ISRAEL OUT) Israeli Defense Minister Avigdor Lieberman speaks during a press conference at the Israeli Parliament on November 14, 2018 in Jerusalem, Israel. Lieberman has announced his resignation as Defense Minister of Israel as a protest against the cease-fire Israel agreed to with Hamas following recent heavy rocket fire targeting Israel from Gaza Strip. (Photo by Lior Mizrahi/Getty Images).”

One Israeli headline complained that Ireland was trying to “criminalize” the Israeli colonization of the West Bank, appearing not to realize that it has been criminal all along. What Ireland is doing is giving the law some teeth.

One of the Fine Gael ruling party leaders worried that the boycott would violate European Union rules. Nothing could be further from the truth. Several European governments, including the Netherlands, have advised their corporations against doing work in the Israeli-occupied West Bank because it might open them to being sued by Palestinian families in Europe who were harmed by this collaboration.

The far right government of Israel behind the scenes actively impels squatting on Palestinian land in hopes of forever forestalling a Palestinian state and keeping the Palestinians stateless and without rights in perpetuity. Its leaders are terrified that the movement to boycott the Occupier over West Bank policy will spread throughout Europe, with which Israel conducts 1/3 of its trade and from which it derives a good deal of its ability for technological innovation. Israel has been treated by the European Union as an honorary member, with enormous benefits for Tel Aviv. While the some 600,000 Israeli squatters in Palestine (800,000 if you count those on Palestinian land around Jerusalem) make up only about 10 percent of the Israeli population, the economy of Israel proper is increasingly intertwined with what Rashid Khalidi calls the “settler-industrial complex.” If the principle of boycotting settler goods produced in Occupied territory becomes normalized, the question arises of whether the boycott of settler-related enterprises in Israel proper won’t be next.

Resolution adopted by the General Assembly on 7 December 2017[on the report of the Special Political and Decolonization Committee (Fourth Committee) (A/72/448)]72/85.

Applicability of the Geneva Convention relative to the Protection of Civilian Persons in Time of War, of 12 August 1949, to the Occupied Palestinian Territory, including East Jerusalem, and the other occupied Arab territories.

The General Assembly, Recalling its relevant resolutions, including resolution 71/96 of 6 December2 016,

Bearing in mind the relevant resolutions of the Security Council,

Recalling the Regulations annexed to the Hague Convention IV of 1907, the Geneva Convention relative to the Protection of Civilian Persons in Time of War, of 12 August 1949, and relevant provisions of customary law, including those codified in Additional Protocol I to the four Geneva Conventions,

and the relevant reports of the Secretary-General,

Applicability of the Geneva Convention relative to the Protection of Civilian Persons in Time of War, of 12 August 1949, to the Occupied Palestinian Territory,including East Jerusalem, and the other occupied Arab territories

Noting in particular the Court’s reply, including that the Fourth Geneva Convention 1 is applicable in the Occupied Palestinian Territory, including East Jerusalem, and that Israel is in breach of several of the provisions of the Convention,

Recalling the Conference of High Contracting Parties to the Fourth Geneva Convention on measures to enforce the Convention in the Occupied Palestinian Territory, including East Jerusalem, held on 15 July 1999, as well as the declarations adopted by the reconvened Conference on 5 December 2001 and on 17 December 2014, and the urgent need for the parties to follow up the implementation of those declarations,

Noting the accession by Palestine on 1 April 2014 to the Geneva Conventions and Additional Protocol I,

Stressing that Israel, the occupying Power, should comply strictly with its obligations under international law, including international humanitarian law,

1. Reaffirms that the Geneva Convention relative to the Protection of Civilian Persons in Time of War, of 12 August 1949, is applicable to the Occupied Palestinian Territory, including East Jerusalem, and other Arab territories occupied by Israel since 1967;

2. Demands that Israel accept the de jure applicability of the Convention in the Occupied Palestinian Territory, including East Jerusalem, and other Arab territories occupied by Israel since 1967, and that it comply scrupulously with the provisions of the Convention;

3. Calls upon all High Contracting Parties to the Convention, in accordance with article 1 common to the four Geneva Conventions and as mentioned in the advisory opinion of the International Court of Justice of 9 July 2004, to continue to exert all efforts to ensure respect for its provisions by Israel, the occupying Power, in the Occupied Palestinian Territory, including East Jerusalem, and other Arab territories occupied by Israel since 1967;

4. Notes the reconvening by Switzerland, the depositary State, of the Conference of High Contracting Parties to the Fourth Geneva Convention on 17 December 2014, and calls for efforts to uphold the obligations reaffirmed in the declarations adopted on 5 December 2001 and 17 December 2014;

5. Welcomes initiatives by States parties, in accordance with article1of the Convention,aimed at ensuring respect for the Convention;

6. Reiterates the need for speedy implementation of the relevant recommendations contained in the resolutions adopted by the General Assembly, including at its tenth emergency special session and including resolution ES-10/15, with regard to ensuring respect by Israel, the occupying Power, for the provisions of the Convention;

7. Requests the Secretary-General to report to the General Assembly at its seventy-third session on the implementation of the present resolution.

RT Interviews with Irish on the issue last summer