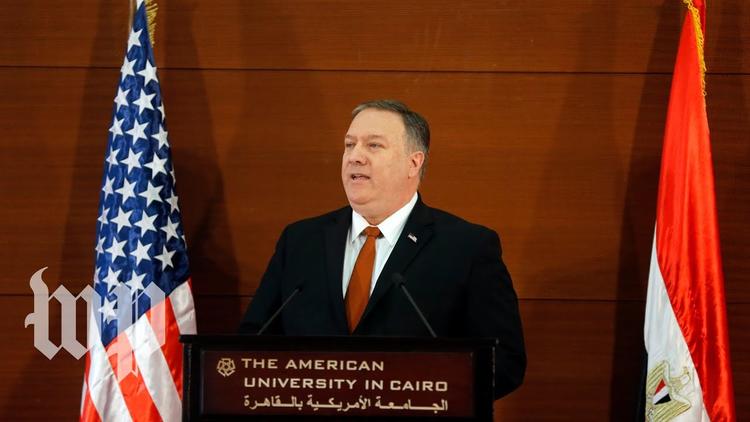 Secretary of State Mike Pompeo gave a major and extremely embarrassing foreign policy speech in Cairo on Thursday, which is probably inconsequential since his major talking points departed from the positions of his president, Trump. Also, aside from some generals and kings and princes, nobody in the region agrees with anything he said.

Pompeo’s message to Egypt is that the US plays a positive role in the Middle East and that Obama was wrong to attempt to get out of the region and re-balance toward the Pacific Rim. The US, Pompeo implied, should have taken a stronger hand during the Arab Spring to keep the Muslim religious Right from coming to power, and should have forestalled the rise of ISIL in Iraq and Syria by staying in Iraq. The US, he said, does not want to occupy any country against its will, in contrast to Iran. (Fact check on Pompeo: Iran is not occupying any countries in the Middle East but has given some military assistance to Syria at the request of Damascus. The US aggressively invaded Iraq without a casus belli and occupied it for nearly a decade against its will.) Pompeo attempted to whip up anti-Iran sentiments as part of his vision of a grand alliance of the US and the Arab world (and, shhh, Israel) against Iran and Hizbullah.

Pompeo’s is the Christian Zionist strain of American foreign policy. It is not shared by his boss, Donald J. Trump, and it in important respects departs from the dovish position of Pompeo’s main financial backers, the Koch Brothers (big oil billionaires), whose Cato Institute probably would advise against deepening US military involvement in the Middle East in order to push back Iran.

We don’t have flash polls in the Middle East so as to be able to tell how Pompeo’s speech was received. But we do have some good recent polling by Zogby in 8 countries of the Middle East, and it doesn’t suggest that the Egyptian public agrees with some of Pompeo’s assertions.

People in the region for the most part (outside of Saudi Arabia and the UAE) really dislike US policy. Zogby notes, “It is important to note that the United States only receives single digit favorable ratings in Iraq and Egypt.” That is, in both Egypt, where Pompeo spoke, and in Iraq, which he had just visited, over 90% of the population has an unfavorable view of the United States.

The invasion and occupation of Iraq, which Pompeo appears to have denied ever happened, is one reason for that unfavorable view of the US among the Middle Eastern publics. Another is the Palestine issue.

Zoghby says,“’ending the occupation of Palestinian lands’ is rated the number one issue in most countries.”

Pompeo wanted to rank Iran as the number one challenge and neglects to mention anything about Israel dominating, punishing, and stealing from 5 million occupied and stateless Palestinians. In the region, Iran comes third, with the most pressing concern being the liberation of the Palestinians from Israeli occupation. Second most places comes a resolution of the Syrian civil war. Iran comes a distant third, which isn’t promising for the agenda of Pompeo of Arabia.

Pompeo presents in public as jolly and gung ho, but of the 100 million Egyptians, some 92 million were glaring at him in anger and disgust. That’s right, America’s favorability in Egypt under Trump has fallen 30 points to only 8%. If only 8% of the people in a country like you, giving a speech there about how you should have interfered more vigorously in their affairs may not be a very good idea.

Throughout the 8 countries of the Middle East polled by Zoghby last fall, people view the US invasion and occupation of Iraq extremely negatively:

“With few exceptions, respondents say that most countries have played a negative role in Iraq, with the lion’s share of fault going to the United States and Iran. Iraqis, who in last year’s poll were evenly divided on the U.S. role in their country, now overwhelmingly express the view that the U.S. involvement has been negative.”

That is, outside of Iraq in the Arab world and Iran, this negative view of US domination of that country was shared by the vast majority both last year and this. Inside Iraq in 2017, 50% of Iraqis were grateful for US help in destroying ISIL. But Iraqis are very unhappy about the corruption, lack of services, bad water, and gridlock bequeathed them by the Bush administration’s installation of cronies, and those discontents now outweigh any earlier gratitude for helping take back Mosul from the phony caliphate.

The Middle Eastern public also thinks that the US invasion and occupation of Iraq was self-interested, classic imperialism:

“When asked who has benefited the most from the war in Iraq, overall the top choice is the United States, with respondents in Tunisia (87%), Egypt (87%), Palestine (53%), Saudi Arabia (50%), and Iran (44%) identifying the United States most frequently as a beneficiary of the war.”

Most people in the Arab world outside the Gulf see the US involvement in Syria as negative. Zoghby reports that “the United States is overwhelmingly seen as the most negative player in” Syria:

93% of the hundred million Egyptians don’t like the US involvement in Syria, which would be a pretty steep hill for Pompeo’s sunny neo-imperialism to climb. I have to say that this almost universal negativity is a little puzzling. Is it because the US in Syria is mainly allied with non-Arab, leftist Kurds? Is it just a residual set of attitudes stemming from the disgust in the region at the 2003 US invasion and then 8.5 year occupation of Iraq? People in the Arab world are afraid of ISIL-style extremism, so you’d think they appreciate more the US role in rolling up that terrorist organization. Anyway, the evidence is that they don’t accept Pompeo’s assertion that American intervention in the region is positive.

As for the project of a grand alliance against Iran, support for it in the general public strikes me as surprisingly weak. Zoghby asked respondents 4 questions about what should be done now that the US has withdrawn from the 2015 Iran nuclear deal. Two of those questions asked about dovish responses. Zogby wanted to know if people thought these courses of action best:

3. Press Iran to participate in a regional security framework to help bring peace to the region.

Fully 61% of Egyptian respondents favored one or the other of these two dovish options. In contrast, only 39% wanted either harsher sanctions on Iran or more support to the Arab bloc from the US to confront Iran.

Majorities also favored the two dovish positions in Lebanon, Iraq and Turkey. Predictably, the hawks are the publics in Saudi Arabia and the UAE, though a surprise is that Tunisians are more hawkish toward Iran than not.

The US wants to deploy the dogs of war against Iran to unite the Arabs and Turkey and Israel in a Concert of the Middle East (just as Britain and Austria led a Concert of Europe against Napoleon). The problem is that the US is perhaps more unpopular than Iran in most of the Middle East, its Likud Party pet in Israel is despised, the US is seen as an imperial, self-interested, grasping power that destroyed Iraq and should never have been in Syria. Majorities in the more populous countries polled– Egypt, Turkey and Iraq– want either to see the Iran nuclear deal kept in force or want to see Iran brought into a larger diplomatic settlement.

Pompeo was the skunk at the party and doesn’t seem to have the self-awareness to notice.