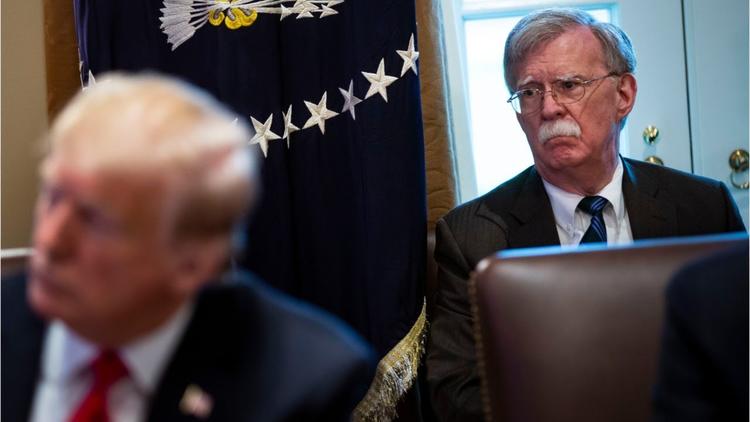 National Security Adviser John Bolton lied his face off when he told Israeli Prime Minister Binyamin Netanyahu on his recent Mideast junket that he was sure Iran’s leaders are dedicated to acquiring deliverable nuclear weapons. Nuclear security expert Joe Cirincione shredded Bolton over his false assertion, which is contradicted by UN inspectors and US intelligence.

Bolton made sure to tell Netanyahu this so that Netanyahu could quote Bolton in his own fantasy-filled and inflammatory speeches urging an attack on Iran.

Some 8 years ago Netanyahu tried to attack Iran himself, but was stopped by his own intelligence officials and officer corps, who saw the step as a catastrophe. Former head of Mossad Meir Dagan publicly questioned Netanyahu’s competency to govern in light of his looney fixation on attacking Iran, and I think by “competency” he meant ‘sanity.’

Axios is reporting that former secretary of defense Jim Mattis was disturbed last September when N Bolton asked the Department of Defense for a contingent plan for an airstrike inside Iran.

The Wall Street Journal had reported that Bolton asked for the plan after a pro-Iran Shiite militia fired mortars into Baghdad’s Green Zone, where the US embassy is located. The blast walls around the Green Zone have now been removed, but since the US invasion in 2003, it has been one of the few parts of the capital safe from car bombings. It has occasionally taken mortar fire. The mortars last September did not cause any deaths or destruction.

Mattis reportedly felt it would have been legitimate to strike back against the Iraqi militia inside Iraq, but unwise to initiate a cross-border conflict involving a state.

Ironically, when Mattis first met Bolton, he joked that he had heard that he was “the Devil.” He appears to have been making fun of normal people concerned about Bolton’s excesses. So then toward the end of his tenure Mattis found out that we weren’t wrong about Bolton, and he had been foolish to be so insouciant.

American policy-makers’ stalking of Iran is not because the country is powerful but because it is weak. They can’t do anything about powerful countries like China or Russia, so they don’t tangle with them militarily. Iran is an annoyance but is weak, and so a career might be made in DC as an Iran hawk. The whole policy fixation is bizarre. Iran does not have an air force worth mentioning and its military budget is on the same order as that of Singapore or Norway. It is not a militarily aggressive state, though it has taken advantage of the chaos caused by the US in Iraq and Syria and by Israel in Lebanon to extend its influence in the Fertile Crescent. But Iran’s help was invited by Baghdad, Damascus and Beirut, not imposed from Tehran.

Americans are always complaining about Hizbullah, but it is a small self-defense force for Lebanese Shiites from Israeli aggression (the Israelis occupied Shiite territory in south Lebanon for two decades and are not known for giving things back without a fight after occupying them). Lebanon’s citizen population is about 4 million and there are probably only 1.3 million Shiites in the country, and I doubt the community can field more that about 25,000 Hizbullah volunteer fighters. Iran does back Hizbullah, but to the extent that it has stopped any further Israeli attempts to annex parts of Lebanon, and has bolstered the beleaguered government of Bashar al-Assad in Damascus, it should be seen as a status quo rather than a radical force. Its major paramilitary engagements since 2013 have been against al-Qaeda affiliates in Syria. (Whether the rotten status quo should have been upheld is a different argument; but overturning it, as Hillary Clinton wanted to, would have been the radical act, not upholding it).

Bolton has been agitating for a war on Iran for two decades. He is an attorney who helped George W. Bush steal the Florida election in 2000, and was rewarded by being made undersecretary of state Arms Control and International Security.

He used his office to help lie the US into the $6 trillion boondoggle of an Iraq War that destabilized the Middle East and led to the rise of ISIL.

While he served in that capacity he made up ridiculous stories like a Cuban-Iranian joint biological weapons program (Communists just love them some Anthrax Ayatollahs). He also managed to withdraw the US from having anything to do with the International Criminal Court. Bolton hates the international rule of law the way the devil hates holy water.

Bolton pioneered some of the typical Trump techniques of making stuff up and then trying to push policy on the basis of his dark fantasies.

Bush tried to shoehorn him in as ambassador to the United Nations but Congress would not confirm him because he is a horrible, angry person who viciously mistreated his aides and tries to fume at people around him until he can intimidate them into taking orders from him on the basis of his crackpot theories. He is another example of psychopathocracy.

Bolton has strong ties to and has taken a lot of money from the People’s Jihadis or (MEK), an Iranian cult-like organization founded in the 1970s that mixes Marxism with Shiite Muslim fundamentalism. The group has at times been on the US State Department list of terrorist organizations and it certainly has engaged extensively in terrorism, i.e. has killed civilians for political purposes. It more deserves the appellation than does Lebanon’s Hizbullah, which mainly had fought in self-defense or against al-Qaeda.

Embed from Getty Images
Maryam Rajavi in Tirana, Albania on 1st September 2017 during Memorial ceremony in commemoration of residence of Camp Ashraf massacre in September 1st, 2013. This ceremony took place at one of the centers of the MEK in Albania on Friday 1st Sept 2017. Maryam Rajavi, the President-elect of the NCRI, joined MEK residents, to pay tribute to 52 massacred in Iraq. Maryam Rajavi said, the massacre in Camp Ashraf must be investigated to prevent further concessions delaying the regimes downfall. (Photo by Siavosh Hosseini/NurPhoto via Getty Images).

The People’s Jihadis are enormously well-funded but it is not clear where the group, which has no support inside Iran and mostly flourishes in the hothouse of expatriate coffeeshop plots in Paris and Los Angeles, gets its funding.

NBC at one point reported that US officials told it that Israeli intelligence, Mossad, funded the MEK.

More recently there have been allegations of Saudi funding for the People’s Jihadis.

It is a measure of how putridly corrupt US politics is that politicians such as Rudy Giuliani and John Bolton have more or less been on the MEK payroll and therefore potentially in the back pocket of Israel’s Likud Party and Saudi Arabia.

No wonder so few care that Trump might be a Russian mole. Apparently it is par for the course for our political leaders to be foreign moles.

Bolton seems to be a disturbed person who, if he hadn’t gotten into Yale, might well have ended up an inwardly seething lower middle class white guy, and who would have been open to the blandishments of white supremacist hate groups such as the Neo-Nazis. As it is, he has the credentials and connections to parade as a normal person despite having actually run a hate group and having mysterious and deep links to a violent Iranian cult.

I’m not sure exactly what the Democratic House can do to forestall Bolton’s peculiar Iranomania from plunging us into another generation of war and instability and bankruptcy. But they should do what they can to get the madman out of office.