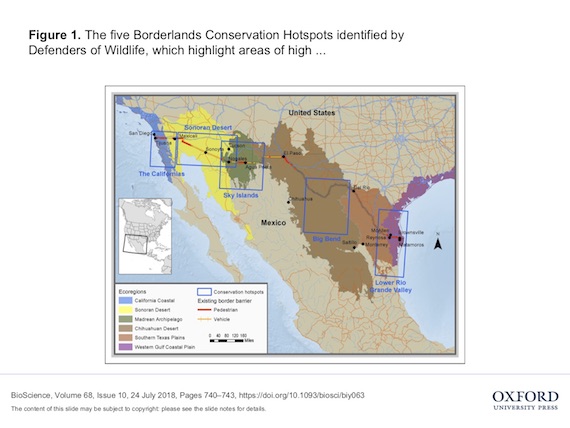 Ann Arbor (Informed Comment) – Trump’s Wall, like most Trump fantasies, is more symbolic than real, which is why he can never remember what its shape would be or what to call it. The fact is that it is just a projection of his racist anxieties, something standing between him and the rapists, murderers, and drug dealers he believes seep into his life from the south, just his worst subconscious impulses seep up to make him rape and launder money and commit other enormities. Trump’s Wall is a mirror for his unfaced dark side, which he projects on the Mexican Other.

Because it exists in his fevered imagination he cannot imagine that it has an impact on real, living beings. But the impact is profound, and deeply damaging.

The Endangered Species Act and the National Environmental Policy Act can be waived by the Department of Homeland Security on the authority of the 2005 Real ID Act.

This waiver allows wall construction to evade any analysis of environmental impact or any study of “less damaging alternative strategies.” There are no opportunities for public comment or legal remedies. 8 such waivers have been issued so far, for all of the four southern border states, 3 of them under Trump himself.

We have environmental laws and we protect endangered species for a reason. These laws enrich our lives and preserve biodiversity that may be key to our own survival. Setting these laws aside for a stupid wall is extremely damaging to us.

We aren’t the only beings who live along this imaginary border we have drawn in our minds. There are wildlife populations there. Walls and barriers get rid of their habitats, or at the least degrade and fragment them. As this map downloaded from Bioscience shows, the area through which the US-Mexican border runs consists of six ecological regions, including “desert scrub, temperate forests and woodlands, semidesert and plains grasslands, subtropical scrublands, freshwater wetlands, and salt marshes.” 1077 species of land and freshwater animals live in these regions, along with 429 plant species. Some 62 of these species are vulnerable, endangered or critically endangered. There are five conservation “hotspots” along the border with “high biological diversity,” and which are menaced by the construction of further border walls (figure 1; Peters and Clark 2018).

Over 2500 scientists from 43 countries signed this article. They are very concerned that Trump could drive whole species extinct with this nonsense.

The Center for Biological Diversity’s Laiken Jordahl observed of Trump’s new wall construction in the southwest, “He just ripped a 20-mile scar through spectacular New Mexico landscape while Washington politicians fight over the difference between a ‘fence’ and a ‘wall.’ It’s a ridiculous argument that’s completely lost on wildlife harmed by these barriers. Congress shouldn’t give Trump another cent for these devastating projects.”

People don’t cross from Mexico in this area of New Mexico. But it is home to migrating groups of ringtail cats, bighorn sheep, kit foxes, Mexican gray wolves and Aplomado falcon, and the style of wall Trump put in “blocks the natural migration of wildlife” according to the CBD. The scar through the desert will also increase floods and erosion.