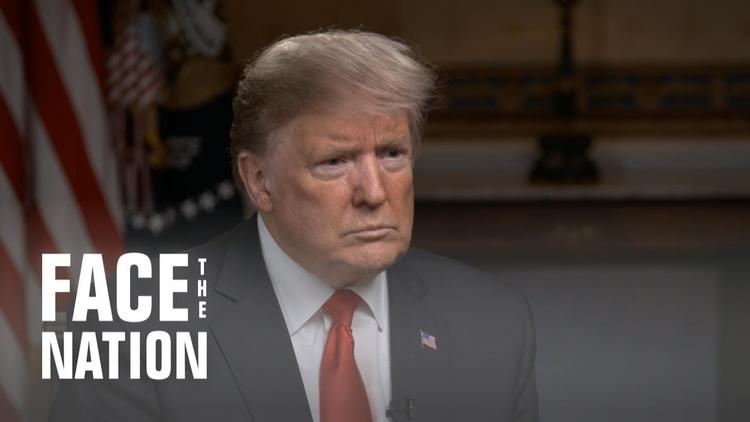 Ann Arbor (Informed Comment) – Trump spoke on foreign policy Sunday on “Face The Nation,” further explaining his thinking on US troops in Syria, Afghanistan and Iraq.

He seems to have made it clear that the US troop presence in Iraq is not, as advertised, to help Baghdad mop up ISIL remnants but rather to keep an eye on Iran. Trump appears not to realize that the Iraqi government is Shiite-dominated and friendly with Iran, and that powerful Shiite parties have already begun parliamentary legislation demanding that US troops depart. His public remarks today will only lend urgency to those efforts.

Trump on “Face the Nation” with moderator Margaret Brennan

With regard to Syria, Trump said this in response to Ms. Brennan’s question about why he insulted his national security team:

“We’ve done an incredible job with Syria. When I took over Syria it was infested with ISIS. It was all over the place. And now you have very little ISIS and you have the caliphate almost knocked out. We will be announcing in the not too distant future 100 percent of the caliphate which is the area- the land- the area- 100. We’re at 99 percent right now, we’ll be at 100. When I took it over it was a disaster. I think we’ve done a great job with that. At the same time, at a certain point, we want to bring our people back home. If you look at Afghanistan we’re going in very soon we’ll be going into our 19th year spending 50 billion dollars a year. Now if you go back and look at any of my campaign speeches or rallies, I talked about it all the time.”

ISIL was not all over Syria. It was in the east of the country out in the middle of nowhere. Most Syrians live in the west. The Obama administration had already hit upon a strategy for dealing with Daesh or ISIL in Syria. Ash Carter, the secretary of defense, had the Pentagon make allies of the leftist YPG Kurds and convinced some local Arab tribes to join them, and then gave these “Syrian Democratic Forces” massive air support.

ISIL was mostly rolled up when Trump came to office, and he just continued with Obama’s policies, though he may have adjusted the rules of engagement so that the US Air Force did not have to be as careful in avoiding killing civilians. It wasn’t a disaster when he took over, it was a well-oiled campaign. It is true that Raqqa, the capital of the so-called ‘caliphate,’ fell on Trump’s watch, but there wasn’t anything different or special about US tactics in 2017.

Pressed on the likelihood that ISIL will survive as a terrorist group in eastern Syria, Trump replied:

Well, this is true as far as it goes. But what the NatSec establishment is afraid of is that you don’t have one armed man, you have several thousand of them, who could regroup if you’re not careful. They plotted out the blowing up of Paris from there in 2015 and you wouldn’t want to see that kind of base for terrorist reestablish itself.

Personally, I’d be more sanguine about the US getting out if I thought the YPG would survive in the medium term to fight a resurgence of ISIL. But Turkey seems dedicated to destroying the YPG, and it isn’t clear that the Syrian central government in Damascus could or would rescue them. Damascus itself has never seemed very interested in fighting ISIL, with the exception of some symbolic or resource-rich territory such as Palmyra and environs.

Trump revealed that the main reason he wants to get our of Afghanistan is financial:

“we’ve been there for 19 years, almost, we are fighting very well. We’re fighting harder than ever before. And I think that they will- I think they’re tired and, I think everybody’s tired. We got to get out of these endless wars and bring our folks back home. Now, that doesn’t mean we’re not going to be watching with intelligence. We’re going to be watching, and watching closely. North Korea–

MARGARET BRENNAN: Isn’t that harder when you don’t have troops on the ground?

PRESIDENT DONALD TRUMP: Well, everything’s harder. But, you know you pay a big price for troops on the ground. We’re spending hundreds of billions of dollars on military. We’re the policemen of the world and we don’t–”

“MARGARET BRENNAN: Because the concern in here by your intelligence chiefs, though, is that you could in that vacuum see a resurgence of ISIS.

MARGARET BRENNAN: See a resurgence of terror groups like Al-Qaeda–

PRESIDENT DONALD TRUMP: And you know what we’ll do? We’ll come back if we have to. We have very fast airplanes, we have very good cargo planes. We can come back very quickly, and I’m not leaving. We have a base in Iraq and the base is a fantastic edifice. I mean I was there recently, and I couldn’t believe the money that was spent on these massive runways. And these- I’ve rarely seen anything like it. And it’s there. And we’ll be there. And frankly, we’re hitting the caliphate from Iraq and as we slowly withdraw from Syria. Now the other thing–.”

Trump’s idea that a terrorist or guerrilla group in Syria can be dealt with by bombing runs from Iraq is daft. That is not how you do counter-insurgency. In fact, until the US got the YPG Kurds to agree to fight on the ground, extensive bombing by the US and its allies at Raqqa had no discernible effect on ISIL whatsoever.

Trump is really focused on money:

“MARGARET BRENNAN: How many troops are still in Syria? When are they coming home?

MARGARET BRENNAN: When are they coming home?

PRESIDENT DONALD TRUMP: They’re starting to, as we gain the remainder, the final remainder of the caliphate of the area, they’ll be going to our base in Iraq, and ultimately some will be coming home. But we’re going to be there and we’re going to be staying–

MARGARET BRENNAN: So that’s a matter of months?

PRESIDENT DONALD TRUMP: We have to protect Israel. We have to protect other things that we have. But we’re- yeah, they’ll be coming back in a matter of time. Look, we’re protecting the world. We’re spending more money than anybody’s ever spent in history, by a lot. We spent, over the last five years, close to 50 billion dollars a year in Afghanistan. That’s more than most countries spend for everything including education, medical, and everything else, other than a few countries.”

I don’t have anything against the US military getting out of Afghanistan. But I hate to see it done on ignorant grounds and in a way that could bring trouble in its wake. I think Kabul will fall to the Taliban fairly soon after a US withdrawal, and that is all right as long as Trump is planning for it. He isn’t. Also, he himself raised military spending by more than $50 bn a year for no good reason except to spend money, and he doesn’t consider that expensive.

And finally there was this bit of wisdom:

MARGARET BRENNAN: But you want to keep troops there now?

PRESIDENT DONALD TRUMP: –but when it was chosen– well, we spent a fortune on building this incredible base. We might as well keep it. And one of the reasons I want to keep it is because I want to be looking a little bit at Iran because Iran is a real problem.

MARGARET BRENNAN: Whoa, that’s news. You’re keeping troops in Iraq because you want to be able to strike in Iran?

PRESIDENT DONALD TRUMP: No, because I want to be able to watch Iran. All I want to do is be able to watch. We have an unbelievable and expensive military base built in Iraq. It’s perfectly situated for looking at all over different parts of the troubled Middle East rather than pulling up. And this is what a lot of people don’t understand. We’re going to keep watching and we’re going to keep seeing and if there’s trouble, if somebody is looking to do nuclear weapons or other things, we’re going to know it before they do.”

The diplomatic and military cover story for the US being in Iraq is that it is mopping up ISIL. If Trump convinces Iraqis our troops are there to spy on Iran, the Shiites among them will be outraged and redouble efforts to kick the US military out.

What Trump wants to do in finally bringing the troops home from Syria and Afghanistan isn’t without merit, but he just gives every impression that he doesn’t know what he is doing. And as for Iraq, keeping troops there to spy on Iran is the worst rationale you could imagine, given that the Iraqi government is dominated by pro-Iran Shiites.