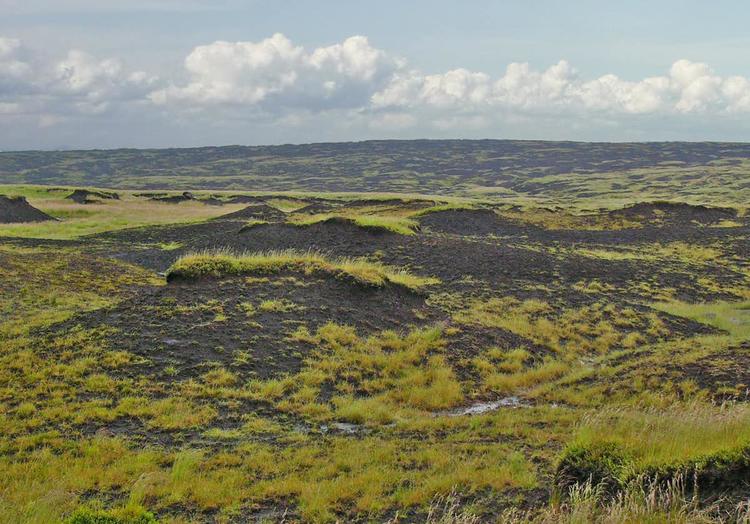 Imagine “carbon emissions”, and what springs to mind? Most people tend to think of power stations belching out clouds of carbon dioxide or queues of vehicles burning up fossil fuels as they crawl, bumper-to-bumper, along congested urban roads. But in Britain and many other countries, carbon emissions have another source, one that is almost completely invisible. In the UK, these overlooked emissions come from our most extensive semi-natural habitat, yet it is a habitat which is almost invisible within the national consciousness.

The source of these emissions can be seen in the rich black peat soils of the East Anglian Fens, the Lancashire lowland plain, the Somerset Levels, the Forth Valley and indeed many lowland river flood plains, as well as in the hugely damaged peat soils of the UK’s uplands. The common thread here is “peat”, a soil derived almost entirely from semi-decomposed plant remains which have accumulated over thousands of years because the ground is waterlogged. Such peat soils are immensely carbon-rich because they largely consist of organic matter. Globally, peatlands contain more carbon than all the world’s vegetation combined.

Despite this, peatlands rarely feature in our cultural consciousness other than as areas of struggle – “stuck in the mire”– or as places of despair or danger. In the uplands, beyond the boundary of cultivated land, extensive peat bogs are lost in the all-embracing term “moorland”, which is more of a cultural term than anything ecologically meaningful. At lower altitudes, living peatland has all but vanished. Britain has drained its fens and converted the land into highly productive fields. Much of East Anglia was once a vast fen peatland, for instance, but just 3% of the original habitat remains today, in small scattered fragments. Such losses are mirrored throughout Europe, while much of the debate about palm oil and forest fires in South-East Asia is actually about the draining and conversion of peatland swamp forest.

When peat soils are drained, the ground surface sinks, which is why large parts of East Anglia and the western Netherlands now lie below sea level. This is partly because peat shrinks and becomes more compact when it dries out, but there is also another key reason. Carbon in the now-dry peat reacts with oxygen to form carbon dioxide so each year some of the soil simply vanishes into the atmosphere as a greenhouse gas. While a sinking ground surface does pose ever-increasing flood risk, it is the release of CO₂ that has far wider implications.

Every hectare (one and a bit football pitches) of tilled peat soil with a water table lowered to 50 cm or more below the ground surface emits somewhere between 12 and 30 tonnes of CO₂ equivalent (that is, all greenhouse gases, including CO₂) per year. To put this into context, that’s ten times the emissions of an average modern car travelling 10,000 miles per year. In fact, the total CO₂ emitted each year from just the East Anglian Fens and the UK’s damaged upland peat soils may be equivalent to around 30% of the country’s annual car emissions.

The irony here is that, although these peat soils were created precisely because they were wetlands, and wetlands are some of the most productive ecosystems on Earth, farming tends to celebrate dryness. Our agricultural system is based on ideas that spread from the dry semi-desert conditions of the Middle East during the Neolithic shift from hunter-gathering to settled farming. Farming has thus been dominated for the past 5,000 years by the principle that dry land is good and wet land is bad – indeed, a farmer who tolerates significant areas of wet ground on the farm is still widely regarded as a poor farmer.

Change is in the air, however. International climate obligations mean that countries are having to reduce their greenhouse gas emissions, and in many parts of the world there are also increasing concerns about the spiralling costs of flooding. No wonder many researchers are now looking at the agricultural possibilities of re-wetting former wetlands in order to establish new forms of farming based on productive wetland species.

In Germany, for instance, a type of “bulrush” is already being used to produce fire-resistant building board. At the University of East London we are currently testing two potential crops: sphagnum bog moss as a replacement for peat in garden-centre “grow bags”, and “sweet grass” as a food crop.

In only a few decades, traditional dryland farming on drained peat soils will be increasingly difficult as the rich organic soils vanish and flood prevention becomes too costly. By instead re-establishing wetland conditions, farms could reduce the risk of floods and retain the existing reservoirs of soil carbon but also potentially add new carbon to these long-term stores.

Indeed, the longer-term vision of farming for carbon as well as food, and all the other ecosystem benefits that come from healthy peatland ecosystems, may already be upon us. It is part of the UK government’s 25 year environment plan, and environment secretary Michael Gove has pointedly signalled his support.

Such a longer-term vision is also deftly expressed in a film titled “The Carbon Farmer” by Andrew Clark, which looks at what life might be like for a carbon farmer three or four generations from now:

Farmers of the future may be tasked with storing carbon as well as producing food.

Everything in the film is already at least possible in one form or another. Our task is now to make it probable.