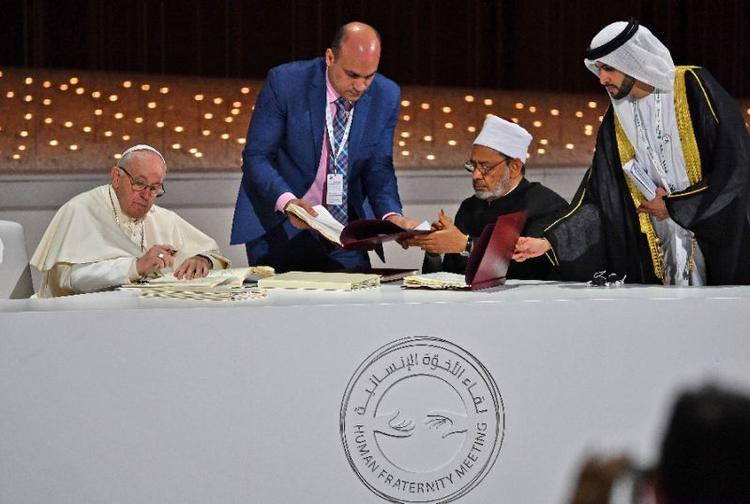 by Catherine Marciano with Rene Slama in Dubai | –

Abu Dhabi (AF) – Pope Francis and a top Muslim cleric Monday issued a joint call for freedom of belief during the first visit by the head of the Catholic church to the birthplace of Islam — the Arabian Peninsula.

Francis, who has made outreach to Muslim communities a cornerstone of his papacy, is on an historic three-day visit to the United Arab Emirates.

He is due to hold an open-air mass on Tuesday for 135,000 of the Muslim country’s million Catholic residents, set to be the largest ever public gathering in the Gulf state.

The two religious leaders signed a document on “human fraternity for world peace and living together”, described by the Vatican as an “important step forward in the dialogue between Christians and Muslims”.

They called for “freedom of belief”, the “promotion of a culture of tolerance”, the “protection of places of worship” and “full citizenship” rights for minorities.

It said “freedom is a right of every person: each individual enjoys the freedom of belief, thought, expression and action” and that “pluralism and the diversity of religions, colour, sex, race and language are willed by God”.

“The fact that people are forced to adhere to a certain religion or culture must be rejected, as too the imposition of a cultural way of life that others do not accept,” it said.

Francis also delivered an address at an interfaith meeting attended by Sheikh Ahmed and UAE leaders, and pushed for an end to all wars in the Middle East, including in Yemen.

The United Arab Emirates and neighbouring Saudi Arabia are key allies of the Yemeni government, which is locked in a war against Iran-linked rebels that has pushed Yemen to the brink of famine.

The pope said all religious leaders had a “duty to reject every nuance of approval from the word war”.

“I am thinking in particular of Yemen, Syria, Iraq and Libya,” he said.

Yemen is the scene of what the UN calls the world’s worst humanitarian crisis, triggered by the intervention of Saudi Arabia, the UAE and their allies in a war between the government and Huthi rebels.

The UAE, which prides itself on its religious diversity in the Gulf, is also a member of the US-led coalition battling the Islamic State group in both Syria and Iraq.

Abu Dhabi Crown Prince Sheikh Mohammed bin Zayed, one of the most powerful rulers in the seven emirates, on Monday gifted the pope a deed for the plot of land on which the first church in the UAE was built. 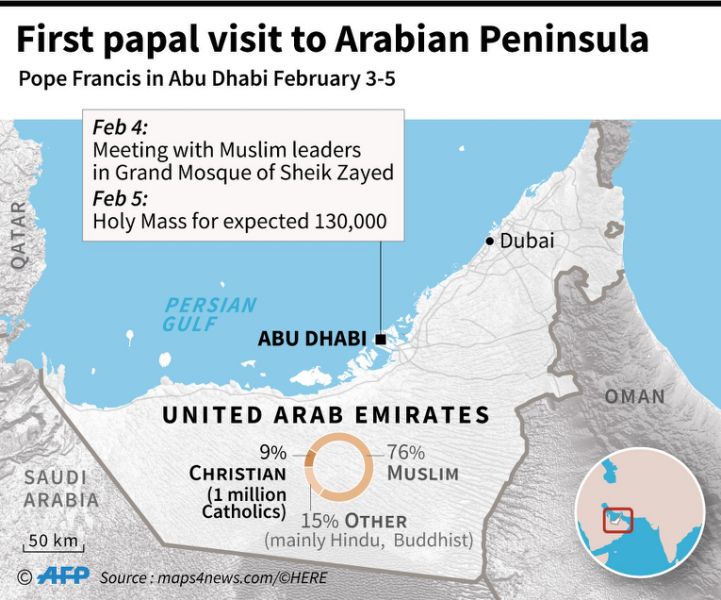 Pope Francis in turn gave him a framed medallion of the meeting between St. Francis Assisi — the pope’s namesake — and the Sultan of Egypt Malek al-Kamel, in 1219.

While the pope did not openly discuss politics, he called for “the full recognition” of rights for people across the Middle East, a potential reference to communities including Shiites in Saudi Arabia, refugees and migrants, stateless peoples and other minorities.

“I look forward to societies where people of different beliefs have the same right of citizenship and where only in the case of violence in any of its forms is that right removed,” he said.

The Emirates has dubbed 2019 its “year of tolerance” but rights groups have criticised it for its role in Yemen, where an estimated 10,000 people have been killed since the Saudi-led alliance the government’s fight against the Huthis in 2015. 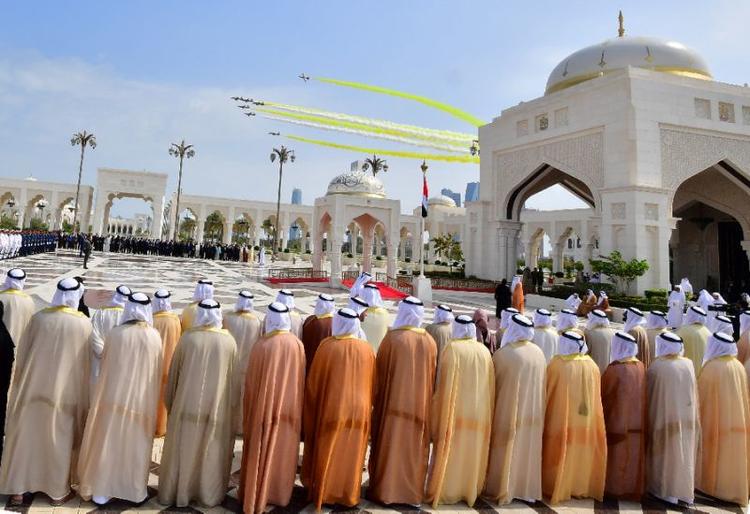 Aircraft fly over the presidential palace in the UAE capital Abu Dhabi during a reception for Pope Francis on February 4, 2019 (AFP Photo/Giuseppe CACACE).”

Muslims make up nearly four fifths of the UAE’s population, but the country is also home to nearly a million Catholics, according to the Apostolic Vicariate of Southern Arabia.

Migrants from Asian countries make up about 65 percent of the population.

The UAE has pushed itself as an open society in a conservative region. The country is home to eight Catholic churches, Hindu temples and a place of prayer that serves as a synagogue.

Bahrain and Qatar are home to one Catholic church each while Oman, Kuwait and Yemen each have four while Sunni powerhouse Saudi Arabia bans all non-Muslim places of worship.

Featured Photo: Pope Francis (L) and the Grand Imam of Cairo-based Al-Azhar Sheikh Ahmed al-Tayeb (2nd-R) sign documents during the Human Fraternity Meeting at the Founders Memorial in Abu Dhabi on February 4, 2019 (AFP Photo/Vincenzo PINTO ). “It is… crucial to establish in our societies the concept of full citizenship and reject the discriminatory use of the term minorities which engenders feelings of isolation and inferiority,” read the document.