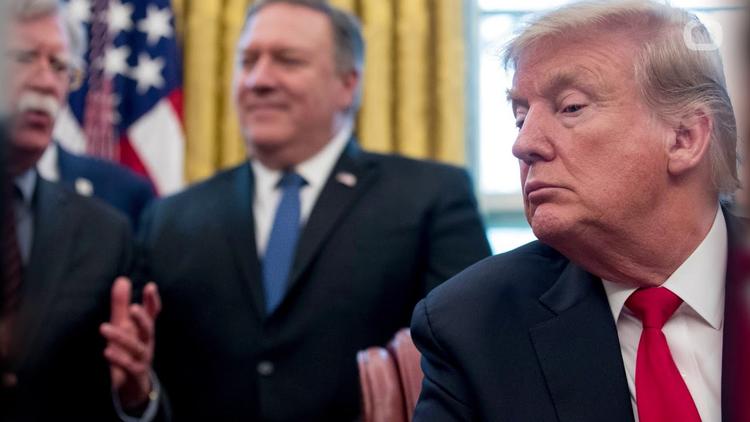 Ann Arbor (Informed Comment) – The clerical Leader of Iran, Ali Khamenei, said Friday on the anniversary of the Islamic Revolution of 1979, that Iran has good relations with all the countries of the world. He observed that he does not urge breaking relations with any European country. “The slogan ‘Death to America,'” he said, “means ‘Death to Trump, John Bolton and Pompeo.’ We have no quarrel with the American nation.”

Khamenei said that ordinarily there are differences of taste and opinion among the Iranian people, but they put these disputes aside when they come out to the city square to march on this day.

He said that the “American regime” is an incarnation of wickedness and violence, sowing crises and pursuing the craft of war.

Iran’s Leader said that some officials of the American government had asked why Iran chants “Death to America!”

He replied, “We have nothing against the American people. ‘Death to America’ means death to the rulers of America.

He noted that in 2014-15 some Iranian elements had negotiated the nuclear deal with the US government. He, personally, would have advised them against signing any agreement with fickle America. He said that they should have been wiser. Many of them, he remarked, now regret the whole episode (since Trump violated the treaty and began targeting Iran). He said they should have diagnosed the situation better before they signaled that they would meet [then Secretary of State John Kerry].

Khamenei’s is a big “I told you so!” to centrists like President Hassan Rouhani and Foreign Minister Muhammad Javad Zarif who negotiated the nuclear deal with the Obama administration, now that the United States has reneged on the treaty it signed with Iran despite Iran’s having continued to adhere to its own obligations.