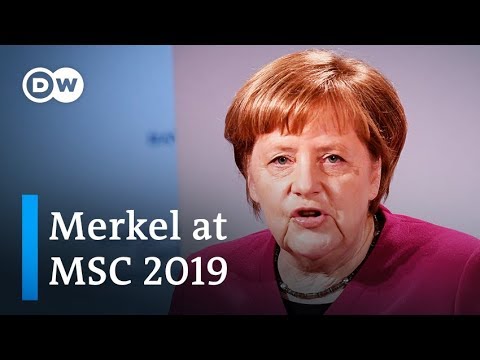 “What we see as an overall architecture underpinning our world as we know it is a bit of a puzzle now; if you like, it has collapsed into many tiny parts . . . We have to think of integrated structures and interdependencies.”

She said of these multilateral institutions, “we must not just smash them.” She underlined the continued need for NATO as a vehicle for what she called “civility,” i.e. as a social lubricant among like-minded nations.

She recalled the Hillary Clinton- Putin START negotiations and expressed nostalgia for the days when Russia seemed to be coming in from the cold. She slammed Russia for annexing Crimea, and expressed regret that Trump cancelled the INF nuclear treaty, especially since he did it without consulting Europe at all.

Vice president Pence had called on Europe to support the US and implied that it was unwise to depend on Russian natural gas.

In a heartfelt slam against Trump’s announced trade war, which will place tariffs on imported automobiles on the trumped up pretext of national security, Merkel expressed puzzlement as to why Trump would invoke national security against Germany automobiles. “We are proud of our cars and we can do that too. I think it would be good if we get into good conversation with each other.” She pointed out that the world’s largest BMW plant is in South Carolina, implying that it cannot actually be a security threat to the US.

Merkel also worried about Trump’s troop withdrawal from the Middle East, what the rise of a new generation of “Is it all right now for the Americanst o withdraw from Syria immediately and quickly, or is it not also a strengthening of opportunities for Iran and Russia to exert influence there? We must also talk about that.”