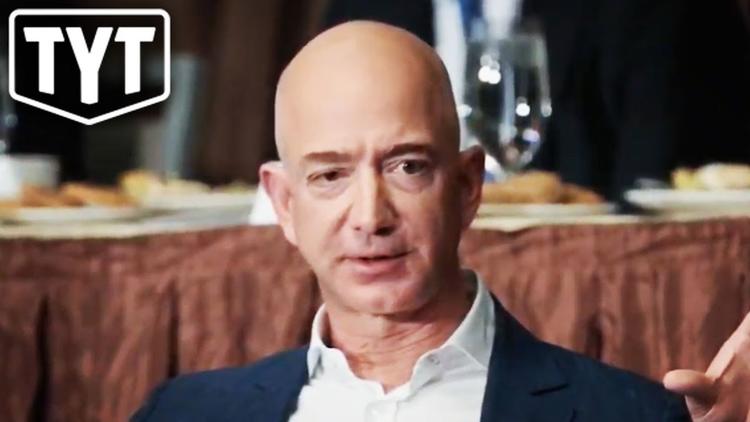 Ann Arbor (Informed Comment) – David Pecker’s attempt to blackmail Amazon CEO Jeff Bezos would not ordinarily attract my eye. Except for this paragraph:

“And sometimes Mr. Pecker mixes it all together:

“After Mr. Trump became president, he rewarded Mr. Pecker’s loyalty with a White House dinner to which the media executive brought a guest with important ties to the royals in Saudi Arabia. At the time, Mr. Pecker was pursuing business there while also hunting for financing for acquisitions…”

We knew that Pecker had brought the French investment banker and Saudi publicist Kacy Grine to the White House.

And Spencer Ackerman had reported on Pecker’s strange move to put a pro-Saudi glossy magazine in grocery store check out lanes in spring of 2018. It is as though he thought American housewives would thrill to the soap opera in Riyadh, where the Dr. Jekyll-and-Mr.-Hyde crown prince Mohammed Bin Salman had in summer of 2017 sidelined his rival Mohammed Bin Nayef, dethroning him as crown prince and greedily taking his place, before he kidnapped many in the Saudi elite to shake them down for $100 bn while imprisoning them in the Ritz Carlton. Days of Our Lives had nothing on the Saudis.

In short, there is every reason to believe that Pecker is entangled with the Saudi royal court of King Salman, perhaps, as Bezos alleges, in search of investment opportunities.

One question I have long had is whether investigators looking at the Russian element in the election of Trump are not unduly downplaying a United Arab Emirates and Saudi angle. That is, did those two oil monarchies help put Trump in power in the first place, and is there a prehistory to their entanglements with his circle?

But what Bezos goes on to allege is that he had hired a private investigator to find out how Pecker got hold of his texts and exchanges of smartphone photographs with his lover, Lauren Sanchez.

And the investigator, Gavin de Becker, looked into whether Pecker’s National Inquirer is influence-peddling for Saudi Arabia for some sort of quid pro quo.

Bezos also hints that Pecker was upset about the Washington Post’s quest to get to the bottom of the Saudi government’s murder of dissident journalist Jamal Khashoggi on October 2, 2018. Bezos owns the Post, though he maintains he is a hands-off owner.

Bezos alleges that the investigation of the Saudi connection most alarmed Mr. Pecker, and precipitated the attempt to blackmail the Amazon CEO into falling silent and backing off, with the threat of releasing further compromising photographs and text messages of a private nature.

Ronan Farrow said on Twitter that Pecker’s hired gun, Australian Dylan Howard, had also attempted to intimidate him when he was investigating Harvey Weinstein’s sexual harassment of all the women in Hollywood.

This charge makes me wonder if Pecker isn’t America’s answer to Rupert Murdoch, whose British tabloids were famous for hacking Britons’ telephone messages and then blackmailing or smearing them with the stolen material. Former prime minister John Major alleged that Murdoch threatened him with bad press unless he bent himself to Murdoch’s will.

I have to say that I never took Pecker or the National Inquirer seriously, but maybe he is secretly one of the more powerful men in the world, holding files on politicians and celebrities and coercing them behind the scenes.

One piece of jeopardy for Mr. Pecker is that he was granted immunity, for cooperating with the Mueller probe, from charges of election fraud for paying off nude model Karen McDougall, Mr. Trump’s lover, to gain her silence during the 2016 election campaign silence. That immunity depends on his avoiding further acts of illegality. It is not clear that the courts would accept Bezos’ claim of extortion. But Pecker wouldn’t be so nervous about Bezos investigating his Saudi ties unless there was something to hide in that regard.

Finally, the Bezos investigator has been telling the Washington Post’s Manuel Roig-Franzia that he does not believe Bezos’ phone was hacked. He thinks that a “government entity” captured the signals from the phone somehow.

Of course, Saudi Arabia and its partner in crime the United Arab Emirates are also good at hacking, and actually got into the cell phone of the Emir of Qatar and then put out deep fake video of him.

And, since the far right wing government of Binyamin Netanyahu is hoping to be rescued politically by a normalization of relations with Saudi Arabia, the Israeli Mossad has a motive to protect Saudi allies like Trump and Pecker, as well.

I’m confused, however, as to how a foreign government could capture text and photos from an ATT or Verizon server (Bezos uses an iPhone). That is to say, the allegation is that the iPhone was *not* hacked and that the signals were scooped up in some other way. Moreover, the diction is “a government entity,” not a foreign government.

It appears to me that de Becker may be alleging that the US National Security Agency captured that material, a capability that has been well documented. The NSA, of course, reports directly to Trump, David Pecker’s dear friend and co-conspirator in election fraud through the suppression of the Karen McDougall affair.

I pointed out in fall, 2016 in a piece at The Nation that the Bush and Obama administrations had made a huge error in not reining in the NSA on Fourth Amendment grounds, thus bequeathing to a maniac like Trump the ability to spy on all Americans. Are those chickens now coming home to roost? Did the NSA spy on Bezos at Trump’s request and then turn the material over to Pecker?