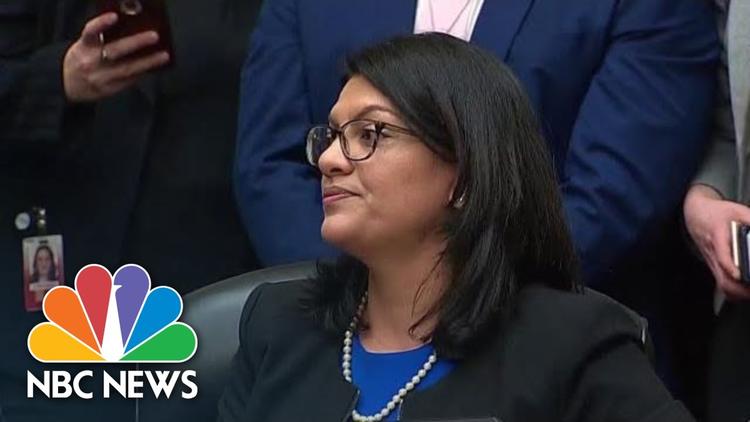 Ann Arbor (Informed Comment) – As I noted yesterday, in Michael Cohen’s opening statement during his public testimony to the House Oversight and Reform Committee, he alleged that Donald Trump is a racist, saying:

‘ He once asked me if I could name a country run by a black person that wasn’t a “shithole . ” This was when Barack Obama was President of the United States. While we were once driving through a struggling neighborhood in Chicago, he commented that only black people could live that way. And, he told me that black people would never vote for him because they were too stupid.’

North Carolina GOP representative Mark Meadows attempted to refute Cohen by bringing to the hearing Lynda Patton, a party organizer for the Trump administration, who now runs part of Housing and Urban Development, who said, Meadows reported, that she said she would never work for a racist as she stood like a stage prop over his shoulder.

Cohen replied that as the son of a Holocaust survivor, he never should have, either. He added, “Ask Miss Patton how many people who are black are executives at the Trump organization. And the answer is zero.”

Rep. Brenda Lawrence of Michigan concurred, saying, “To prop up one member of our entire race … and say that nullifies it is totally insulting. To look at his administration speaks volumes.”

But the real fireworks came, as Matt Wilstein at the Daily Beast says, from first-term congresswoman Rashida Tlaib, also from Michigan, who said what Lawrence did but more personally:

“Just because someone has a person of color, a black person working for them does not mean they aren’t racist. And it is insensitive, and some would even say that the fact that someone would actually use a prop, a black woman, in this chamber, in this committee is alone racist in itself.”

Meadows threw a hissy fit, representing to the chairman of the committee, Elijah Cummings, that he had been branded a racist by his colleague. House rules forbid vituperative language toward other representatives on the floor. Meadows also said that he has friends and relatives of color.

Cummings, who says he has a close personal friendship with Meadows, intervened to restore calm, asking Tlaib if she meant to call Meadows “a racist.” She pointed out that she had done no such thing.

Tlaib had characterized an action, not a person, so that Meadows’ objection did not actually hold water. But Tlaib attracted the lightning, even though other House members said similar things, because she was explicit. She called out the stage-propping of Patton, who stood there silently as Meadows deployed her to defend Trump.

Maybe it is just me but I think we need more explicit calling out of political charades a la Tlaib, not fewer.

This exchange raises the question of what a racist is. Clearly, all human beings have moments of ethnocentrism, moments of annoyance that they work into thoughts or comments about race (or in other world societies, religious groups or linguistic ones; “race” is not universally the social fissure).

To be a racist, however, is not a momentary lapse. It is a long term set of convictions and actions based on those convictions. It involves the systematic and long-term practice of discrimination.

Racism is, moreover, not “natural;” its premises are learned, typically from families and communities. I would argue that it could be seen as a ‘habitus’ in the sense of anthropologist Pierre Bourdieu.

It is sort of like being a habitual criminal versus a person who commits one crime and immediately regrets it. Some people who commit a crime even turn themselves in and offer restitution. Habitual criminals don’t behave that way. Of course, even habitual criminals can be reformed, just as habitual racists can confront their false premises and hurtful actions.

Habitual racism has the form of a factual conviction while being inevitably false, which perhaps explains how seductive and destructive it can be. A racist statement has the form, “All X are Y,” or at the very least, “You can have a strong expectation that X will be Y.”

But if you just think about it, the same nuclear family produces very different people with differing abilities and character. A larger group is even more diverse, more especially where the criterion for membership in it is something so arbitrary and relatively insignificant as skin tone.

Skin color is often taken as a proxy for race, but while a society and a culture can indeed construct social groups on the basis of skin color, in and of itself it is meaningless. In some large part, skin color is an adaptation to the level of ultraviolet rays in a human’s environment. Nature selects for light skin over thousands of years where ultraviolet ray strength is low, as in Scotland or Scandinavia, because fetuses need UV rays to make vitamin D. Nature selects for dark skin in a high UV ray environment because they can do genetic damage to fetuses. There are other factors in skin color, including mutations, but the large determinative long-term cause is UV ray adaptation.

By the way, racialized skin color differs from society to society. Sudanese see a difference between the “brown” Arabic-speakers of the north and the “blue” Fur or Dinka or Nuer, who speak other languages and are held to have had less intermarriage with Egyptians or other Arabs. I don’t think most Americans could tell an allegedly yellow Sudanese from a blue one. Such racism is sufficiently a problem that “racism” on this basis (al-`unsuriyyah or ‘elementalism’) is prohibited in the Sudanese constitution.

While the skin is a large organ and very visible, it is only 2% of the genome and there is no connection between melanin levels and characteristics such as intelligence, sense of humor, or leadership abilities.

When applied, then, to groups constructed as “races,” the assertion “All X are Y” is inevitably incorrect and wrongheaded, and usually causes a great deal of emotional and social damage.

If someone is convinced over a long period of time that “you can have a strong expectation that Blacks will be lazy” or that “Mexicans will be criminals” or that “Arabs and Muslims will be violent,” and if that person acts on these premises, then the person is a racist.

It is possible, however, for someone who doesn’t hold these premises to commit a racist act or say something racist. Then the action or the statement is racist, but its author is not necessarily, especially if in the aftermath they show remorse and show no sign of “all X are Y” thinking.

Trump is a racist because he does think you can have a strong expectation that particular ethnicities will be characterized fairly systematically with particular character flaws, and he has said these things over and over again.

From what we can tell, Meadows is not a racist in general. But he has said some racist things, such as in 2012 when he gave a speech urging that “we send Obama back to Kenya or wherever.”

And Tlaib was right to call out the performance with Patton as illogical (it did not prove anything) and also as having the aspect of racism, inasmuch as Meadows ventriloquized a silent African-American woman standing behind him.