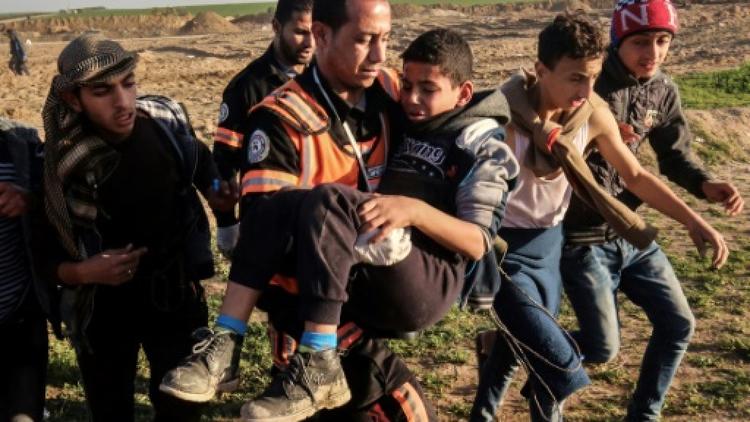 Amman (AFP) – Around 40 children have been killed and many injured in one year of demonstrations along the border between the Gaza Strip and Israel, the UN said Thursday, calling for an “urgent de-escalation”.

Thousands of Palestinians have gathered at least weekly along the border in protests . . .

Demonstrators are calling for Israel to lift its crippling decade-long blockade of Gaza, while also demanding refugees be allowed to return to homes their families fled in the late 1940s during the creation of the Jewish state.

Around 40 children have been killed in the protests and “nearly 3,000 others have been hospitalised with injuries, many leading to life-long disabilities,” the UN children’s agency (UNICEF) said.

“UNICEF reiterates its outrage at the very high numbers of children who have been killed and injured as a result of armed conflict 2018,” said UNICEF’s Middle East director Geert Cappelaere.

He called on both sides to “ensure children are not targeted”.

“Exploiting children’s lack of sense of purpose and vulnerabilities or enlisting them into violence are violations of children’s rights.”

In total, 258 Palestinians have been killed by Israeli fire in Gaza since the protests began, most during border clashes.

Two Israeli soldiers have also been killed over the same period.

Israel says its response is necessary to defend the border and accuses Hamas, with whom it has fought three wars, of orchestrating violence there.

The UNICEF statement follows another severe flare-up this week between Hamas and Israel, with a rocket attack from the Gaza Strip that sparked retaliatory air strikes.

A mass border protest planned for Saturday to mark the first anniversary of the demonstrations has raised fears of further tensions.

Featured Photo: ” UNICEF said nearly 3,000 children have been hospitalised since protests erupted on the Gaza-Israel border a year ago AFP/File.”