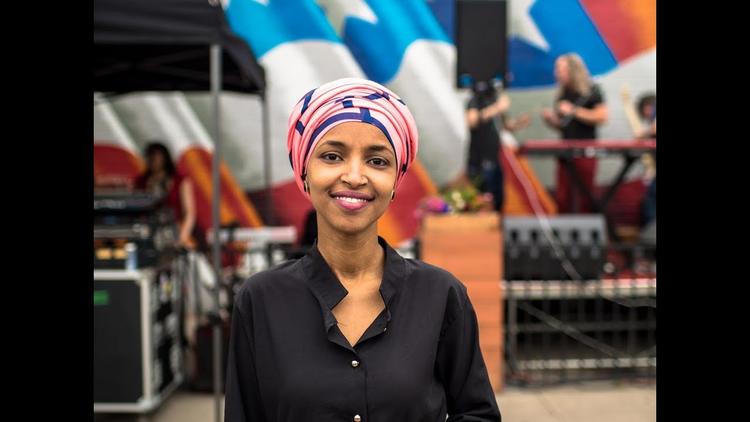 US Congressman Ilhan Omar has called on America to put human rights, justice, and peace at the centre of its foreign policy and cited examples in the Middle East where she said: “Washington has failed to apply these universal values to all nations”.

“I believe in an inclusive foreign policy—one that centers on human rights, justice and peace as the pillars of America’s engagement in the world, one that brings our troops home and truly makes military action a last resort,” the Minnesota Democrat wrote in an op-ed for the Washington Post on Sunday.

Omar who has come under fire for her strong views concerning unquestioned US support for Israel laid out her vision of an American foreign policy centred on “universal values”. She said that “the question of how the United States engages in conflict abroad is deeply personal to me.” The 37-year-old explained that she had fled her home country, Somalia when she was eight from a conflict that the United States had engaged in. Omar spent four years in a refugee camp in Kenya, where she said she “had experienced and witnessed unspeakable suffering from those who, like me, had lost everything because of war”.

Omar sits on the House Foreign Affairs Committee; an influential body authorised to oversee the impact of US foreign policy. The freshman Congress member garnered national attention very early on when she gave a powerful demonstration of her intent to shake up US politics by using her position in the Committee to ask tough questioning of Trump’s special envoy to Venezuela, Elliott Abrams.

Continuing her crusade for justice and human rights in the Post article, Omar called out the double standards of the US over its policies in the Middle East where successive American governments have allied themselves with some of the most brutal regimes in the world. “Valuing human rights also means applying the same standards to our friends and our enemies,” she wrote.

Omar pointed out that “we do not have the credibility” to call out abuses by adversarial governments in Venezuela, Cuba, and Nicaragua when we “do not also support those fighting for human rights” in friendly Latin American nations such as Guatemala, Honduras and Brazil.

Equally, she went on to say that “our criticisms of oppression and regional instability caused by Iran are not legitimate if we do not hold Egypt, the United Arab Emirates and Bahrain to the same standards”.

Calling on the US to “hold all of our allies to the same international standards as our enemies” she continued: “we cannot continue to turn a blind eye to repression in Saudi Arabia — a country that is consistently ranked among the worst of the worst human rights offenders.”

Omar also called out the US over its double standards in Palestine and urged Washington to put human rights and justice at the centre of its policy in resolving the conflict.

“We must acknowledge that this is also the historical homeland of Palestinians. And without a state, the Palestinian people live in a state of permanent refugeehood and displacement. This, too, is a refugee crisis, and they, too, deserve freedom and dignity,” she wrote.

While giving her support for a “two-state solution, with internationally recognized borders, which allows for both Israelis and Palestinians to have their own sanctuaries and self-determination” she warned that “the current situation between those two peoples is unsustainable.”

Criticising the US formula for peace in the region which invariably puts stability above justice and human rights, Omar wrote: “Working toward peace in the region also means holding everyone involved accountable for actions that undermine the path to peace — because, without justice, there can never be a lasting peace.”