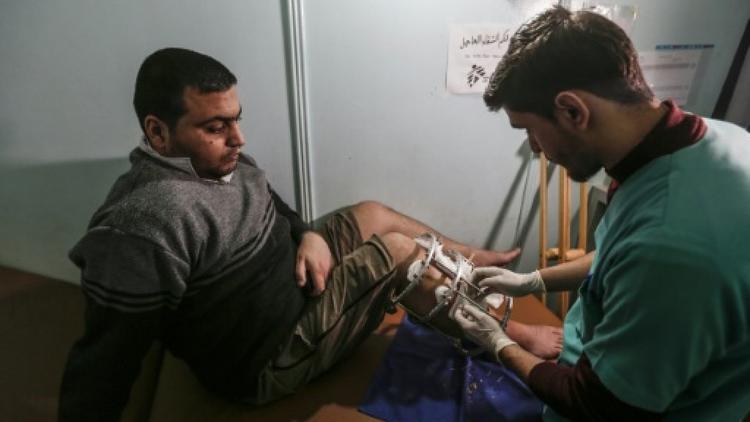 Gaza City (AFP) – A year ago, Ezzedine al-Baz’s decision to skip work and join tens of thousands at the first day of protests along the Gaza-Israel border nearly cost him his life.

Baz, then 29, said he had been standing a couple of hundred metres from the border fence for only about a half an hour when an Israeli sniper’s bullet pierced his leg.

Five operations and multiple infections later, he is missing a chunk of bone, his leg remains strapped in a metal case and he will likely never walk as before.

“It has been a year that I have been suffering, there is still pain,” he said from a clinic run by medical charity Doctors Without Borders (MSF) in Gaza City.

“At night I don’t sleep at all. If I had known, I would have stayed at work.”

A year after the start of protests and clashes on the Gaza-Israel border, more than 200 Palestinians have been killed by Israeli fire.

But beyond those killed, thousands of others wounded have been largely forgotten.

There have also been knock-on impacts for the Palestinian territory’s already beleaguered health system.

Hundreds of those shot remain at risk of infection and amputation, while Israel has turned down most applications to leave the strip for treatment.

So stretched are healthcare services that thousands of operations for other conditions have been delayed, while doctors who can leave are fleeing the strip, Gazan medics say.

Hundreds of those shot on the border remain at risk of infection and amputation
With major protests expected on the anniversary Saturday, medical professionals are worried.

“A full-blown escalation would obviously push the system again towards the edge of collapse,” said Gerald Rockenschaub, the World Health Organization (WHO) head in the Palestinian territories.

The protests labelled the Great March of Return have called for Palestinian refugees to be allowed to return to their former homes now inside Israel, which Israelis view as advocating for the destruction of the country.

They were also billed as an opportunity for protesters to break the decade-long Israeli blockade of Gaza.

The World Bank says the restrictions are the primary cause of desperate economic circumstances in the strip, where seven out of 10 young people are unemployed.

Israel says they are necessary to isolate Hamas, the Islamist group that controls Gaza and with whom it has fought three wars.

Early on, many protesters remained far back from the fence and demonstrated peacefully. Others approached and clashed with Israeli forces.

Those approaching the fence have progressively become more violent.

Explosive devices, stones and fireworks have been used against Israeli forces. There has been occasional gunfire, with one soldier killed by a Palestinian sniper.

MSF has treated more than 4,000 Plaestinians with gunshots wounds.

Israeli forces’ use of live fire has come under heavy criticism, with Palestinians and rights groups saying protesters have been shot while posing little threat.

Last month, a United Nations probe said Israeli soldiers had intentionally fired on civilians in what could constitute war crimes.

At the MSF clinic, dozens of young men with casts sit on plastic chairs waiting for treatment.

The organisation has treated more than 4,000 Palestinians with gunshot wounds. A few hundred are not healing and risk amputation.

Mohammed Bakr, a 27-year-old fisherman, was also shot on March 30 last year and has had six operations.

“Since that day I have had no hope for the future,” he said.

He accused Israeli soldiers of shooting at protesters who did nothing to provoke them.

“I won’t be able to work like before. The leg won’t carry weight.”

With Gaza’s medical system overstretched, treatment outside the strip could ease pressure.

Around 500 applications have been made by those injured in the marches to cross the Israeli border for treatment, according to figures published by the WHO.

Less than one in five have received the permits in time.

COGAT, the Israeli body responsible for the permits, confirmed it granted around 100 requests.

Less than one in five permit requests have been approved by Israeli authorities, for those seeking to leave Gaza for treatment.

“The Gaza health system suffers from long years of neglect by the Hamas terror organisation, which prefers to invest its citizens’ money in terror and military power,” it said.

More than 8,000 operations for other often serious but not life-threatening conditions — such as gallstones or hip replacements — have been postponed in Gaza hospitals according to the WHO.

Neither the WHO nor Gaza health authorities said they had exact figures.

WHO’s Rockenschaub said he recently met a nurse who walked miles to work each day as she didn’t have money for a bus.

“Whenever we talk to health authorities in Gaza, even to individual physicians, many of them talk about their intention to leave,” he told AFP.

Featured Photo: “Ezzedine al-Baz has had five operations on his leg since being shot a year ago. Mahmud Hams, AFP.”