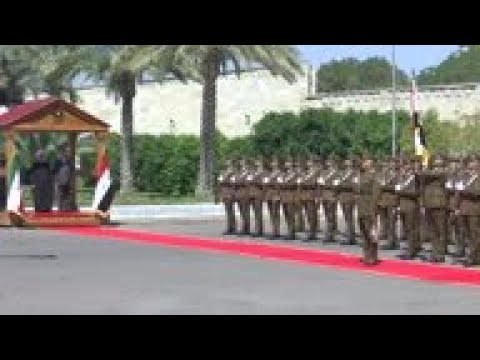 US President Donald Trump had to sneak in to Iraq, a supposed US ally, arriving at the Ein Al-Assad airbase for an unannounced visit on 26 December. Not a single Iraqi official was there to welcome him. Instead, Iraqi Prime Minister Adel Abdel-Mahdi angrily snubbed him, refusing to travel to the airbase to meet him as requested. Many members of the Iraqi parliament went so far as to demand the departure of the some 5000 US troops based there. Eventually, President Trump had to sneak out of Iraq the same way he entered.

In stark contrast, on his visit to Iraq between 11 and 14 March Iranian President Hassan Rouhani was received as a statesman. Welcomed with honour, he stepped onto the red carpet and was received by the Iraqi President, Barham Salih, on arrival. The message was clear; in the new Iraq, the US should no longer take things for granted. Iran is Iraq’s neighbour and, though its influence in the country might weaken, it will never be eroded completely.

This was Rouhani’s first visit to Iraq since taking office in 2013 and it upset the US. One of the major objectives of the visit was to bypass, or at least ease, economic sanctions the US had re-imposed on Iran after the Trump administration unilaterally withdrew from the Iran nuclear deal, originally signed in 2015.

Judging by the number of documents signed while President Rouhani and his delegation were in the Iraqi capital Baghdad, they have done well in fulfilling this aim. In a joint press conference after welcoming his guest, Abdel-Mahdi said “Iraq won its war against Daesh, [in which] Iran played a major role,” adding that, “from start to end, [Iran] never gave up on Iraq”.

This is the number one problem for the US. Recognising Iran’s counter-terrorism role, at least in fighting Daesh, is something the Trump administration dislikes intensely. Instead, it continues to accuse Iran of sponsoring terrorism. Behind the scenes, the Trump White House also continues to pressure Iraq to scale down its economic ties with Iran, but so far to no avail.

One of the agreements signed during Rouhani’s most recent tour abolishes visa fees for Iraqis visiting Iran and vice-versa, in a bid to encourage tourism and private sector investors. Such an agreement is important if we remember that Iraq is home to Shia’s holiest sites in Karbala, Kadhimiya and Najaf. Last year, an estimated 5.9 million Iranians made the annual pilgrimage to those sites, bringing an estimated $5 billion to the Iraqi economy.

Iran also wants to bolster its position as Iraq’s number one economic partner, competing against Turkey. Iranian exports to Iraq stand at roughly $13 billion, with Tehran hoping to increase this to $20 billion.

The visit also highlights the fatal strategic error Washington made nearly twenty years ago: invading and occupying Iraq. In 2003, the US-led coalition invaded Iraq, conquering Baghdad and toppling Iraq’s President, Saddam Hussein, in less than a month. The repercussions of that illegal and ill-planned invasion are still felt in Iraq and the entire Middle East today.

Even today, the fiasco is seen as evidence of a failed US policy that not only destabilised Iraq but made it easy prey to myriad problems, including Iranian dominance.

While the US justified its 2003 invasion by pointing to Baghdad’s stockpile of weapons of mass destruction (WMDs) – evidence of which was never found – it failed to undertake a simple cost-benefit analysis of the invasion and its aftermath. Before the US-led invasion, Iraq acted as a counter to Iran’s regional influence, providing a balance of power and being able to protect itself without depending on foreign help.

President Trump might blame his predecessors for the invasion and its consequences, but that does not change the reality of the situation facing him on the ground. Trump has continued to claim that he opposed the 2003 invasion, despite the fact that he expressed support for it in a radio interview aired in September 2002, seven months before the US invaded. Iran is now the biggest beneficiary of that invasion and will continue to be so for a long time to come. Simply put, Iran got rid of its rival Iraq without firing a shot and is now helping to reshape the new Iraq.

President Rouhani’s recent visit to Baghdad demonstrates Iran’s increased regional role at the expense of the US and its allies. Despite US efforts to isolate Iran, its influence in the region, from Baghdad to Beirut, is only deepening.

Iraq today is no longer the puppet it used to be when it comes to Iran. In an interview in February, President Trump said he wants to keep US troops in Iraq to “watch” Iran, as he put it, only to be rebuffed by Iraqi officials.

Sixteen years after the invasion of Iraq, the US has not yet “fixed” Iraq, let alone the troubled region more broadly. Curbing Iranian clout in the Middle East – a stated US policy – has all but failed to hinder Tehran’s successful infiltration of Iraq and beyond. The US, recognising Iraq’s need for Iranian help, granted Baghdad a sanctions waiver until May to continue importing Iranian gas.

Even if President Trump does not renew this waiver in May, Iraq still needs Iranian help and will get it, one way or the other. Gas imports to Iraq are crucial, since Baghdad uses Iranian supplies to keep its power grids working. Iran will be all too happy to keep pumping the gas. Between now and the next time President Trump sneaks back into Iraq, under cover of darkness, Baghdad will have grown even closer to Tehran at the expense of Washington.

This work by Middle East Monitor is licensed under a Creative Commons Attribution-NonCommercial-ShareAlike 4.0 International License. If the image(s) bear our credit, this license also applies to them. What does that mean? For permissions beyond the scope of this license, please contact us.