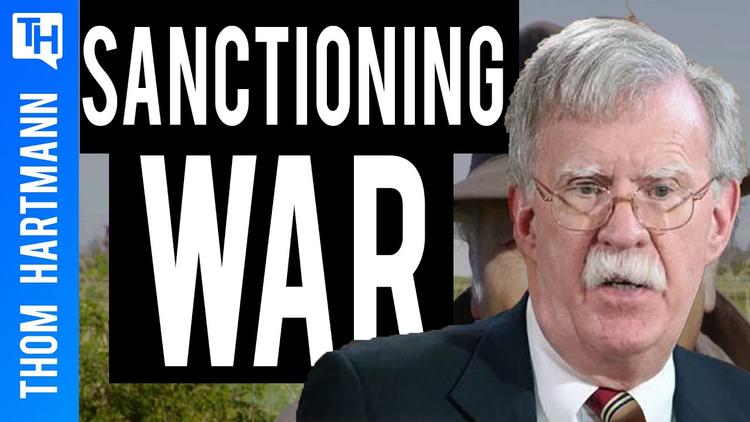 (Foreign Policy in Focus ) – Bolton’s broadsides against Cuba, Nicaragua, and Venezuela hint at ambitions for much more dangerous geopolitical conflict — and nothing short of a new Cold War.

If you’re in the market for a troika of tyranny, Donald Trump, John Bolton, and Mike Pompeo certainly fit the bill. Or, if you’d rather focus on countries not individuals, you might single out Saudi Arabia, the United Arab Emirates, and Egypt as the three most likely candidates. Perhaps, if you’re in a confessional mood, how about Christian fundamentalism, Jewish extremism, and Salafist Wahhabism?

A troika, for those who haven’t read any 19th-century Russian novels recently, is a carriage drawn by three horses. So, the ultimate troika of tyranny, from the point of view of the planet as a whole, would feature the three horsemen of the ongoing apocalypse: climate change, nuclear proliferation, and global pandemic.

But no, that’s not what National Security Advisor John Bolton had in mind when he talked last week of a “troika of tyranny.” In a rehash of a speech he gave in November in Miami, Bolton declared last week that the “troika of tyranny — Cuba, Venezuela, and Nicaragua — is beginning to crumble.” Further laying on the insults, Bolton called Cuba’s Miguel Díaz-Canel, Venezuela’s Nicolás Maduro, and Nicaragua’s Daniel Ortega “the three stooges of socialism.”

Ever since George W. Bush included Iraq, Iran, and North Korea in an “axis of evil,” speechmakers have been in search of the holy grail of geopolitical matchmaking (for instance, Condoleezza Rice’s “outposts of tyranny”).

Bush’s phrase, which proved so enduring, was an extraordinarily flawed piece of work. The three countries he grouped together had little to no relationship at the time. Iraq and Iran had fought a nearly decade-long war that left them bitter regional rivals. North Korea, which has no ideological affinity to either country, was probably included in the list so that it didn’t appear anti-Islamic. This particular axis didn’t have a leg to stand on.

Bolton’s more alliterative phrase suffers from the same conceptual problems. Worse, it revives an anti-Communist crusade that could easily expand to include North Korea, China, and any left-leaning country (New Zealand?) that makes the mistake of looking at Bolton funny.

Cuban leader Miguel Díaz-Canel is one of those autocrats that Trump doesn’t like. It’s not Díaz-Canel’s ideology that rubs the American president the wrong way. After all, Trump has no problem praising China’s Xi Jinping or falling in love with North Korea’s Kim Jong Un. Rather, Cuba made the unpardonable error of negotiating a détente with Trump’s predecessor, Barack Obama. So, by the logic of the Trump administration, Cuba is guilty by association.

Over the last two-plus years, Trump has rolled back the elements of the agreements that the Obama administration negotiated with Cuba that culminated in diplomatic recognition in July 2015. The Trump administration has restricted travel to the country, the amount of money that Cubans in America can remit to their families back home, and the deals that U.S. businesses can negotiate with Cuban counterparts. Also, the administration will now allow U.S. entities to file lawsuits against foreign companies operating on property appropriated by the state after the 1959 revolution.

The Obama policy was all about nudging Cuba in a particular direction. More people-to-people contact would increase the free flow of information. More business deals would encourage the growth of market activities. Meanwhile, unrestricted remittances would help Cubans deal with the myriad difficulties of everyday life.

The Trump administration isn’t interested in nudging Cuba in a particular direction. Its punitive measures are designed to encourage regime change, pure and simple. The decision to allow lawsuits to go forward is aimed at scaring off European investors in particular who’ve been operating in Cuba despite decades of U.S. sanctions and embargo. In response, Spain wants the EU to challenge the new U.S. policy at the World Trade Organization.

Bolton never liked Cuba. When he was undersecretary of state for arms control in the George W. Bush administration, Bolton accused the country of making biological weapons. This accusation came only two months after Bush had inaugurated the “axis of evil,” and Bolton was eager to shoehorn Cuba into the new group. But his efforts to designate the Caribbean island a “terrorist threat” — and prepare the ground for yet another U.S. invasion — foundered when a congressional investigation turned up no evidence of a biological weapons program in the country.

Now Bolton is excited to have a second chance to group Cuba with two other countries that have fallen afoul of the United States: Venezuela and Nicaragua.

Like the original members of the “axis of evil,” they don’t have much in common with one another. Cuba is avowedly Marxist in orientation, with a Third World agrarian spin. Venezuela, on the other hand, is a corrupt petro-state led by a leader who calls himself socialist but is really just a klutzy kleptocrat. Then there’s Daniel Ortega, who was once a socialist revolutionary but has transformed himself into a Catholic dictator along the lines of Francisco Franco.

None of these countries poses even the remotest threat to the United States. They have dismal human rights records, but that hasn’t been a concern for the Trump administration anywhere else in the world.

So, why is Bolton bothering to waste his rhetorical flourishes on the trio? The national security advisor claims that Cuba is propping up Maduro. He hints that Ortega’s days are numbered. Is Bolton campaigning to revive what had once been the traditional U.S. approach to Latin America: invasion, occupation, regime change?

After all, his most recent “troika of tyranny” speech was timed to coincide with the anniversary of the failed Bay of Pigs invasion of Cuba on April 17, 1961. And the audience for his speech was similarly chosen with care: the Bay of Pigs Veterans Association.

When it comes to Bolton, war is always a possibility pretty much anywhere in the world. But with the Trump administration focusing most of its wrath against Iran, the “troika of tyranny” speech is probably not the opening salvo of a new, hyper-militarist Monroe Doctrine.

Bolton likely has a longer game plan in mind.

You can almost see the lips beneath the walrus moustache purse in displeasure when Donald Trump shakes hands with Xi Jinping, murmurs sweet nothings to Kim Jong Un, and has quiet confabs with Vladimir Putin.

John Bolton has never concealed his profound antipathy to the current government in North Korea. He wants to rewrite the one-China policy and is willing to use military force against Beijing as part of that effort. As for Russia, Bolton believes that Putin is a liar and Moscow represents a serious long-term strategic threat to the United States.

This, then, is the shadow “troika of tyranny” that John Bolton would roll out in a speech if only Donald Trump’s personal predilections didn’t get in the way.

But that isn’t stopping the national security advisor from carefully preparing the ground to do just that as soon as Trump gets frustrated with Kim, Xi, and/or Putin.

Toward that end, Bolton carefully chose “troika” for his phrase: a Russian word that can later be repurposed to suggest that Moscow is in fact at the root of these problems. And Bolton is hammering away at the “socialist-communist” nature of the three Latin American countries, which will prove enormously useful later on when expanding the troika to include North Korea and China.

In the end, Bolton is after nothing short of a new Cold War.

Cuba, Venezuela, and Nicaragua are small countries with no desire or means to attack the United States. North Korea with its nuclear weapons, China with the world’s second largest military, and Russia with its geopolitical ambitions, on the other hand, are much worthier adversaries.

Prolonged conflict with these three will keep militarists like Bolton in business for decades. As importantly, Bolton can use these larger confrontations to unravel all international institutions, all forms of international cooperation, in fact anything that smacks of an international community.

With all eyes focused these days on Trump and his myriad crimes, John Bolton’s speeches are a reminder that even worse options are waiting in the wings.