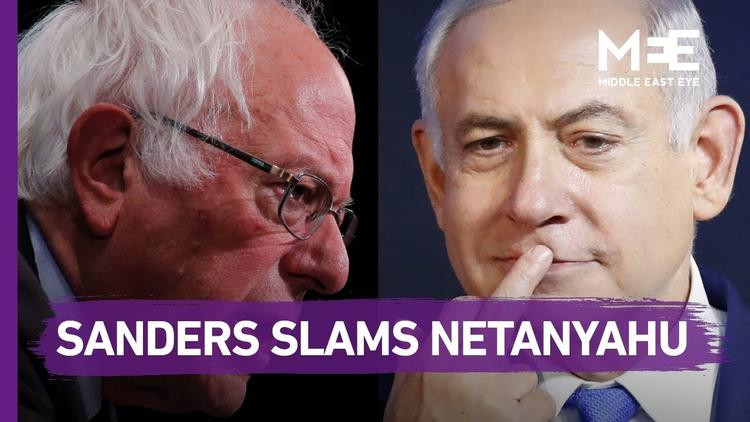 Ann Arbor (Informed Comment) – On Monday at a CNN town hall, Sen. Bernie Sanders said, “I am not anti-Israel. But the fact of the matter is Netanyahu is a right-wing politician who I think is treating the Palestinian people extremely unfairly . . . What I believe is not radical. I just believe that the United States should deal with the Middle East on a level playing field basis.”

Only in America, where there is no global heating, social justice is everywhere you look, guns don’t kill people, white people are more discriminated against than minorities, and Trump is the great Evangelical hope, could the assertion that the government of Netanyahu is far right wing and racist be controversial.

The U.S.-Israel alliance serves America’s interests. We benefit from the close bonds between the governments and peoples. Name-calling by political leaders against the democratically elected government of Israel is counterproductive to maintaining close ties and advancing peace.

Sanders wasn’t name-calling, he was accurately describing. There really is no other way to characterize Netanyahu’s government than as racist. And no one is sabotaging peace more than Netanyahu, who gleefully destroyed the Oslo agreement and then gloated about it, and who has pledged that the Palestinians will get nothing politically as long as he is PM, and who has also pledged to steal most of their land.

Netanyahu’s government is keeping 5 million people under its military rule stateless and without basic human rights, in part on racial grounds.

AIPAC, after all these decades of lambasting as racist bigots anyone who criticized its demand for unvarnished support of Israel, is now attacking the most plausible Jewish candidate for president this country has ever seen.

No better proof could ever be presented that AIPAC doesn’t give a fig about anti-Semitism but is all about knee-jerk support for Israel, and is willing to harm American Jewish interests where they conflict with those of Netanyahu.

Most Americans probably do not know (because television news never tells them) why Sanders thinks Netanyahu’s government is racist. It is really, really racist.

Kahane, a major violent hate group leader, founded the Jewish Defense League, seen by the FBI as the most active and dangerous terrorist group in the United States in the 1970s and 1980s. He also founded the party Kach, which has many affiliates, including Kahane Chai, which was listed as a terrorist group by the US government. Kahanists are alleged to have been behind the murder by pipe bomb of Arab-American activist Alex Odeh in 1985. In 1994, Kach member Baruch Goldstein shot and killed 29 Palestinians at the Cave of the Patriarchs at the Ibrahimi Mosque in Hebron. Thereafter the party and its affiliates were banned in Israel and parties that had racism as their basis were not allowed in Parliament.

Netanyahu, leader of the far right Likud Party, faces a challenge from the coalition of a center-right general, Benny Gantz, and a center-right politician, Yair Lapid. In order to fend off this challenge, he sought a coalition with the far right Jewish Home Party. But to seek yet another alliance, with a Kahanist group, is widely seen in Israel as a dangerous step, and even Jewish Home politicians are threatening to pull out rather than ally with Kahanists.

Kahanists are not only racists toward Palestinian-Israelis and Arabs in general, and have not only advocated violence toward those groups, but have spoken of assassinating Israeli prime ministers and so are seen as extremists even by some on the Israeli far right.”

So this is literally as though Trump had invited a KKK grand wizard into his party coalition and campaigned with him on stage, with the KKK guy wearing white sheets.

I asked the rhetorical question of whether the American Israel Public Affairs Committee could sell Netanyahu’s Kahanaist government to the American public. I recognized that they would try.

” The Times of Israel reported on Netanyahu’s hysterical response to being mildly criticized for hooking up with the Israeli equivalent of Dylann Roof supporters. He played an ebullient game of whataboutism, complaining of the ‘hypocrisy’ of the ‘left wing’ AIPAC and American Jewish Committee, the US Israel lobbies who criticized the idea of rehabilitating Kahanists. Israel has had parties representing the 20 percent of the population that is of Palestinian heritage, which Netanyahu flatly characterizes as ‘terrorists.’ He equates the denunciation of the 2009 and 2014 Gaza wars by Palestinian-Israeli members of parliament with terrorism and then equates voting for their parties or appearing in public with them also with ‘terrorism.’ Of course, in reality the Likud wars on little Gaza, which killed hundreds of innocents and leveled civilian infrastructure, are the terrorism.

Netanyahu’s barbs associating his critics with “Arabs” and ipso facto “terrorism” show that he isn’t and never was much better than the Kahanists himself. . .

But in the US the Boycott, Divestment and Sanction movement is making inroads on the left, and has become a plank in the platform of the Democratic Socialists of America caucus within the Democratic Party. BDS is being adopted by churches and civil society organizations. And it is responding to the Jim Crow conditions in the Israeli-ruled Palestinian West Bank that already are Likud Party policy. Imagine if Netanyahu comes back as PM only because he has the backing of the terrorist wing of muscular Zionism. BDS would spread like wildfire.

AIPAC, AJC and the thousands of Israel lobbies they help coordinate will do what they have to do, in the end. They have attempted to prevent Israel ever from being publicly criticized by anyone important in US politics and to banish from the airwaves anyone who points out that Israel has become a rogue, Apartheid state. They demand silence from Americans and now are even attempting to deep-six the First Amendment by more or less outlawing BDS [boycott, divestment and sanctions on Israel].”

If he is elected, Sanders is the best thing that will have happened to the United States in decades, and he is now giving serious attention to a progressive foreign policy that will be good for the whole world, as well.

The mission of the Israel lobbies is now to stop him.