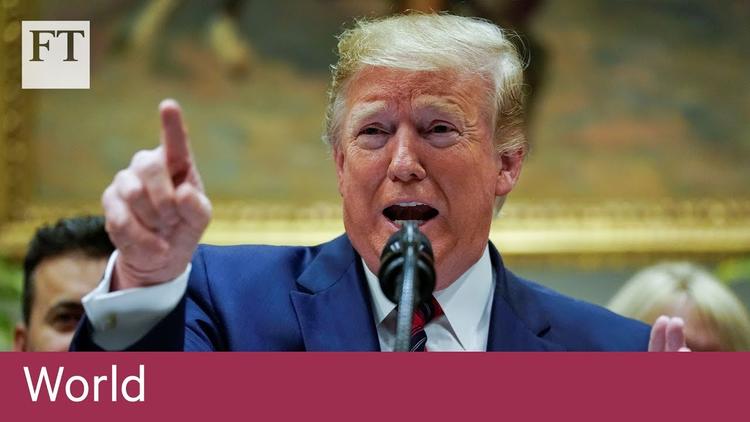 Ann Arbor (Informed Comment) – Julian Borger at The Guardian reports that Trump gave an impromptu news conference on Thursday in which he urged Iran to call him, as though he was being held hostage by John Bolton and Mike Pompeo and was signalling that Iran should rescue him.

I happened to see the bizarre performance live, and it reminded me of the old infinite monkey theorem, which holds that if an infinite number of monkeys typed randomly at keyboards for long enough, they would eventually type out the complete works of Shakespeare. The only problem is that in the real world, the universe might expire from heat death before any of the monkeys can actually produce that text.

A Trump speech is like large numbers of monkeys hitting random keys, and if you get an occasional coherent passage, it seems like an accident.

A reporter asked Trump about National Security Adviser John Bolton’s hawkish statements and actions toward Iran and Trump replied, “John .. has strong views on things, but that’s OK. I actually temper John, which is pretty amazing, isn’t it?”

Even Trump got the joke about how seldom he seems to be the adult in the room.

But Trump also recognized that relations with Iran were at a nadir and that military conflict could break out.

The Washington Post had reported that Trump is unhappy with Bolton’s interventionism in Venezuela and complained that Bolton was trying to drag him into a war. Bolton had told Trump last week that the Venezuelan opposition could easily pull of a coup against President Nicolas Maduro. When that move failed, as the officer corps remained with the president, Trump concluded that Maduro is a “tough cookie.”

Then Trump actually said that Iran should call him.

Earlier his administration had rejected further talks with Iran unless it first withdrew from Syria and jumped through 12 such hoops. Typical for Trump, he threw his own policy out of the window on a whim, though to be fair it was a stupid policy.

Trump maintained that the reason Iran had not called him is that former secretary of state John Kerry still talks to current foreign minister Mohammad Javad Zarif and had discouraged Iran from calling Trump. Trump then called for Kerry to be prosecuted under the Logan Act, which forbids US civilians from engaging in diplomacy with foreign powers.

Kerry’s office issued a statement to CNN saying “Everything President Trump said today is simply wrong, end of story. He’s wrong about the facts, wrong about the law, and sadly he’s been wrong about how to use diplomacy to keep America safe.”

Iran’s ambassador to the UN predictably pointed out that Iran had been negotiating with the US and had achieved a treaty on mothballing most of its nuclear enrichment program, and Trump was the one who breached that treaty.

Understandably, Iran wants to know what guarantee it has that if it were to reach a new deal with Trump, Trump wouldn’t just breach that one, too.

Iran is not going to call Trump and save him from the maniacal John Bolton, who allegedly was pressed on Trump by sinister casino mogul Sheldon Adelson as the one “ask” for his campaign contributions.

The frequent about-faces and erratic pronouncements of Trump are enough to discourage anyone from engaging in diplomacy with him, much less a proud country like Iran that feels the US has repeatedly intervened in its affairs, even to the point of overthrowing its government in 1953.

Worse, we’re stuck with Trump at the helm of the foreign policy of the world’s sole superpower. He actually casually talked about war with Iran. God help us.