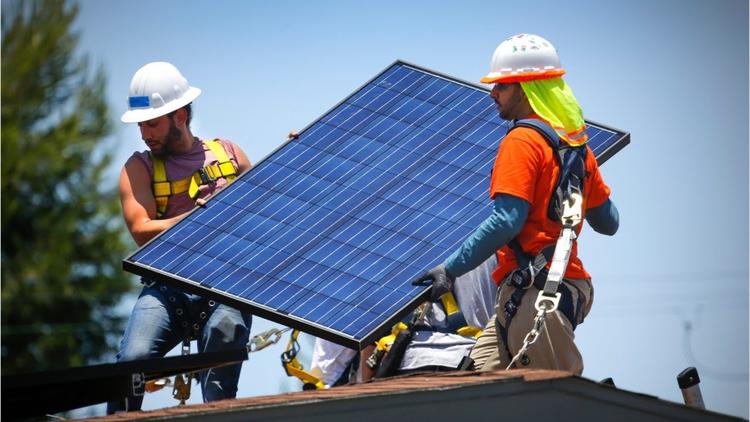 Ann Arbor (Informed Comment) – Wood Mackenzie Power & Renewables and the Solar Energy Industries Association (SEIA) just released a report showing that there are 2 million solar home installations in the United States. That is enough to power 12 million homes. (There are 127 million households in the US, and about 64% of Americans own a home).

It was only in 2016 that the country hit 1 million, after 40 years of the new technology.

By two years from now, the number of solar home installations will climb to 3 million, and in 2023 it will climb to 4 million, having doubled in 4 years. By 2024, new home panels will be installed at the rate of one a minute.

California, Arizona, New Jersey, New York and Massachusetts lead the way, though Hawaii is also a leader despite its small population.

Starting in 2020, all new homes built in California will have to come with solar panels on the roof.

There is still a $7500 Federal tax rebate, and many states also offer tax incentives (the states not controlled by Big Oil).

Zillow estimates that putting up panels increases the value of your home by 4.1%, so some of the cost would be payed for that way.

Truth in advertising: The Coles have had 16 solar panels on the roof since 2012, and our monthly electricity bill in the sunnier months last year was $14 (most of that was the gas stove, I think.) If you own a home and are going to be in it at least 10 years, you are actually costing yourself money by not putting up the panels. If you combine the panels with an electric car, payoff can be in as little as 6 years.

Most solar power in the US is generated by industrial installations, either huge solar farms with panels or concentrated solar installations. As of the end of 2018, the US had 64 gigawatts of solar capacity, having put in 10 gigawatts in 2018 alone.

In the entire world in late 2018, there were 500 gigawatts of installed solar capacity, so that the US has 12 percent of the world total. China has more, and a much bigger percentage of Japan’s electricity comes from solar than is true of the US. German is also a significant player. But since the US has the most sophisticated science establishment in the world and the largest nominal gross domestic product, it is a national shame that the US is not really the solar leader.

The US emits about 6 billion tons of carbon dioxide annually. Carbon dioxide is a dangerous greenhouse gas that traps the sun’s heat and prevents it from radiating back out into space. The more CO2 we put into our atmosphere, the hotter the average surface temperature of the planet will get. Moreover, the pattern of weather will also change, and the prospect of sea level rise and more powerful tropical storms stares us in the face.

We know how to cut our emissions. It is cheaper to do so than not to do so. Less emissions mean better lung health. So what are people waiting for?