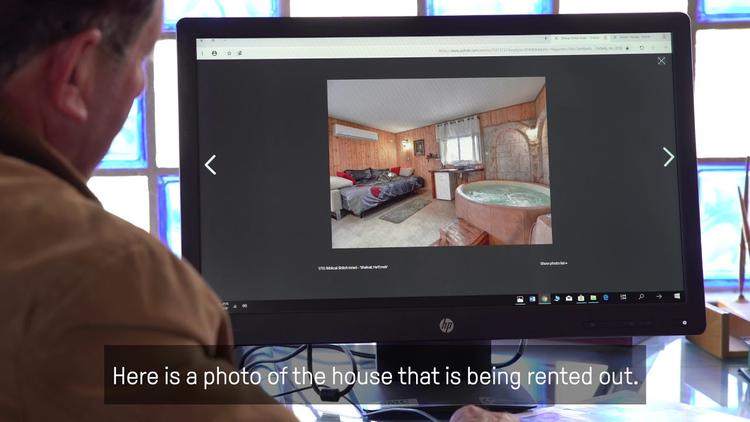 Last year, AirBnB declared that it would withdraw listings on its site from Israeli settlers based in Jew-only colonies in the West Bank. All such colonial-settlements are illegal under international law.

The move came after years of campaigning by Palestine solidarity activists. The effect of their efforts was acknowledged by AirBnB when the property lettings company announced the initial withdrawal.

Center for Constitutional Rights: “Jalud village: Palestinian West Bank village challenges settlers living on their land in a US court”

However, under pressure, AirBnB has now capitulated to demands from Israel and its supporters to reverse the move. Part of this pressure was a lawsuit by Israeli and Israeli-American settlers and supporters against the company in a US court.

As my colleague at The Electronic Intifada, Nora Barrows-Friedman reported in April, Amnesty International called this U-turn a “reprehensible and cowardly move that will be another devastating blow for the human rights of Palestinians.”

The Boycott, Divestment and Sanctions (BDS) campaign calling on AirBnB to drop its Israeli settlement listings is not over, though. Palestinians directly dispossessed and discriminated against by the colonists listing their settlement properties on AirBnB launched a countersuit some months ago. In the wake of AirBnB’s capitulation, they have confirmed that their countersuit against the settlers will be going ahead.

“Although I am disappointed by AirBnB’s about-turn, we have always known that the road to justice would be a long one,” said Randa Wahbe, one of the Palestinians lodging the countersuit. “We laid out the settlements’ discriminatory realities for the court and how they impact our daily lives. I hope the court will allow us to proceed with our claims.”

Center for Constitutional Rights: “Randa Wahbe: Palestinian-American sues settlers in a US court”

Wahbe has spoken out on a video made by the Centre for Constitutional Rights (CCR), the activist law firm which filed the countersuit in a US court. “[Israel’s racist restrictions] have hindered me from being able to visit my father’s side of the family in East Jerusalem, from being able to conduct my PhD research, and most importantly from getting to know where I am from,” she explained. “It pains me to think of how many Palestinians have been killed or arrested by the Israeli army to help facilitate this continued Jewish-only settlement expansion.”

Another of the suit’s intervenors is the local council of the Palestinian village of Jalud, near Nablus, in the northern West Bank. The village has lost 80 per cent of its land to nearby settlements.

Some of these settlements, known as “outposts”, are illegal even under Israeli law, yet are still protected by the Israeli military. What’s more, one of these illegal outposts contains a property that is listed on AirBnB. You can see it in the video at the top of this article, where it is listed as a home in “Biblical Shiloh, Israel”.

As the Palestinian head of the village’s council says, “It is immensely painful to know that those who own the land can’t walk on it or reach it, but can only view it on the internet.”

Another plaintiff of the countersuit is the municipality of ‘Anata, a Palestinian town near Jerusalem, whose land has been stolen by several nearby Israeli settlements.

Center for Constitutional Rights: “‘Anata town: Palestinian West Bank town challenges settlers living on their land in a US court”

As a resident of the town says in this video, “We are prohibited from living on these lands, but [Jewish] people can come from Russia, Poland and similar places, they can build housing units here, and then advertise it online for rent! This means that to them, this is an investment venture, not out of a need that they have.”

Ironically, the settlers are claiming in their suit that AirBnB discriminated against them when the company decided to remove settlement properties from its platform. As the CCR explains, “The plaintiffs are in effect claiming that Airbnb is discriminating against settlers’ ability to dispossess Palestinians and exclude them from their own land.”

This is the first time that Palestinians are challenging the settlers living directly on their land, which has been stolen from them, in a US court. There have been other similar cases, but this one has been launched by the Palestinians directly affected by these specific settlements. As such, this will be an important case to watch.