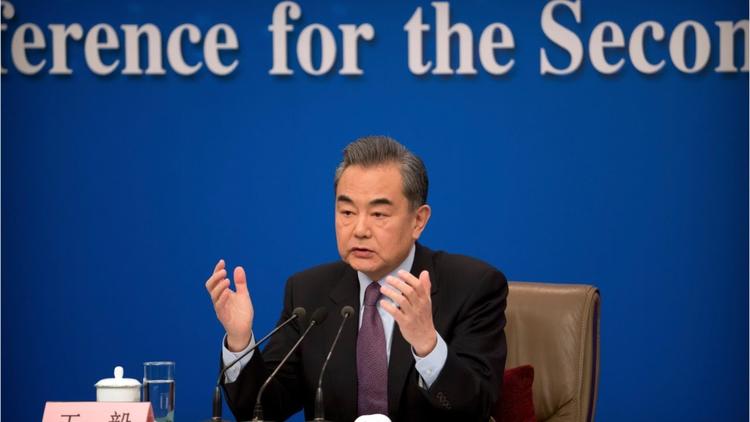 Ann Arbor (Informed Comment) – Chinese foreign minister Wang Yi said at a news conference on Saturday that China opposes US unilateral sanctions on Iran and appreciates Iran’s continued commitment to the 2015 nuclear deal with the five permanent members of the UN Security Council, despite the breach of it by the Trump administration.

This, amid evidence that China has resumed importing oil from Iran despite the Trump administration’s opposition.

Iranian foreign minister Mohammad Javad Zarif is in Beijing on a diplomatic mission to shore up the Joint Comprehensive Plan of Action or nuclear deal, as a result of which Iran had been promised sanctions relief that it never received. Indeed, US sanctions on Iran are so harsh today that they far outstrip those imposed before 2015, despite Iran’s adherence to the terms of the deal.

China also has been angered by Trump’s abrupt imposition on its goods of a 25% tariff last week.

Yi, in a telephone call with US secretary of state Mike Pompeo also on Saturday, complained about the tariffs. With regard to heightened tensions between the Trump administration and Iran, he urged restraint.

This May, the Trump administration ceased issuing waivers to countries that buy Iranian petroleum, causing Iran’s oil exports to plunge to only 500,000 barrels a day in March, from a high of 2.5 million barrels a day before Trump imposition of severe sanctions in 2017.

Reuters is reporting that a tanker just offloaded 130,000 barrels of Iranian crude at the Chinese port of Zhoushan. Iran has ceased reporting transparently on its exports and appears to be exporting petroleum on shadowy tankers with false destinations on their manifests, as a way of evading US Treasury Department sanctions. Zhoushan officials deny the report, saying they have brought in no Iranian oil for four years. Since Reuters is depending on anonymous leakers, this allegation would not stand up in a court, and US Treasury might not be able to do anything about it.

It is also being alleged by Bourse and Bazaar that a Chinese government-owned tanker, Pacific Bravo, just picked up two million barrels of petroleum from Iran and is now heading back toward China. Its stated destination is Indonesia, but that may be a cover. The tanker is owned by Kunlun Bank, which is in turn owned by the China National Petroleum Corporation, which is in turn owned by the Chinese government. For the US Treasury Department’s Office of Foreign Asset Control successfully to sanction a Chinese government-owned entity would require Chinese cooperation, which will not be forthcoming. China may figure that if they are going essentially to be fined via Trump tariffs (which China does not pay but which will reduce US consumer demand for Chinese goods), that it doesn’t matter if Treasury piles on. Moreover, there is the question of proving that China did import. Trump severe sanctions are reducing the transparency of such transactions.