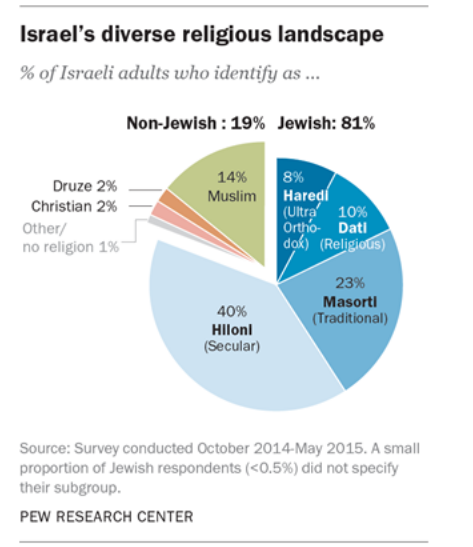 Ann Arbor (Informed Comment) – We’ll know later today whether prime minister Binyamin Netanyahu will succeed in forming a government. If not, Israel will have snap elections in September. In parliamentary systems, coalitions are often made after the election. In the US, the two big parties have already made their coalitions before the election. The GOP is a combination of wealthy entrepreneurs, prairie farmers, and Evangelicals, which Trump manages to bring together around economic nationalism and hatred of certain ethnic groups, or maybe most of them. In Israel, they have to put together the coalitions afterward. The Israeli far right, which dominates, has both secular and religious constituencies, and they absolutely despise one another.

Israeli society is, like that of the United States, deeply polarized between the secular-minded and the religious. Some 40% of Israelis report themselves not religious, and 23% say they do not believe in God.

In the 1990s, about a million immigrants came in from Ukraine and Russia (the former Soviet Union). They had been brought up to view religion as sort of like smoking– maybe it won’t kill you immediately but it is bad for you and probably will eventually kill you.

At the same time, the Haredim or Ultra-Orthodox have grown from 2% in earlier decades to 8% of the population today. That would mean that they are about 700,000 strong, about the population of Detroit nowadays. Over the next 40 years, Israel’s population will double from nearly 9 million to about 18 million, which would make it a little more populous than the Netherlands. Haredim will then make up 29%, almost a third.

Haredim are a little like the Amish in Pennsylvania. About half of them don’t believe in being on the World Wide Web, and the number would be less if they actually listened to their rabbis. Many of them don’t believe in the legitimacy of the Israeli state, since they believe that only the coming of the Messiah could establish such a state, and therefore don’t like the idea of serving in the Israeli army. About half the men and 25% of the women are unemployed and they suffer from relatively high rates of poverty.

114,000 Ultra-Orthodox men are currently enrolled in religious seminary, or about 17% of the Haredi population (34% of its men).

Here’s the problem. The Russians and Ukrainians who came in the 1990s are often themselves irreligious and they don’t like the style of life of the Haredim. They are typically grouped in the Yisrael Beitenu (Israel is our Home) party. The recent Eastern European immigrants dislike that the Haredim essentially get stipends from the state and subsidized food, and most important, they mostly don’t have to serve in the army. (Some 3,000 a year do sign up for military duty and a minority now is fairly militant nationalists.)

The leader of the Russian-Ukrainian bloc in the Israeli parliament, the Moldovan immigrant Avigdor Lieberman, insists that an already-passed set of laws and regulations aimed at integrating the Haredim into the nation more, including a demand for military service.

With 120 seats in parliament, Netanyahu needs 61 to govern. His Likud Party has 35 seats.

Netanyahu needs the Yisrael Beitnenu seats to get to 61. But he also needs the votes of some small Ultra-Orthodox Parties. They want the government to soften the military service provision.

So far Lieberman is not yielding. (He also wants a war on little Gaza.)

And so the divide between the non-religious and the religious is standing in the way of the formation of yet another far right Israeli government.

Ironically, if Netanyahu is ousted over all this, and becomes a civilian, he could be more open to prosecution. Lieberman’s militant secularism could bring him down and put him away.

Ironically, Binyamin Netanyahu played dirty to get another term as prime minister, impelled in part by the corruption charges chasing him, which he had hoped he could get parliament to immunize him from. He played the racist card against the Palestinian-Israelis, over 20% of the population, and he convinced an allied party to make a coalition with the small far, far Right Otzma Yehudit or Jewish Power bloc, which has been accused of terrorism. Although he disappointed his allies on the far Right by declining to go to all out war against the Palestinians of Gaza, he loosened the rules of engagement to allow the Israeli army to just shoot down unarmed Palestinian protesters on their, the Gaza, side of the border.

This is a war crime, and indeed has been pursued so systematically that it may now rise to a crime against humanity.

But the current crisis is not about Palestine. I suppose it is in part over who will fight for Israel, if 27% of the future population checks out of the army and sees the state as illegitimate.

And this gridlock in Israel, produced by the secular-religious divide, we’ve got that too.