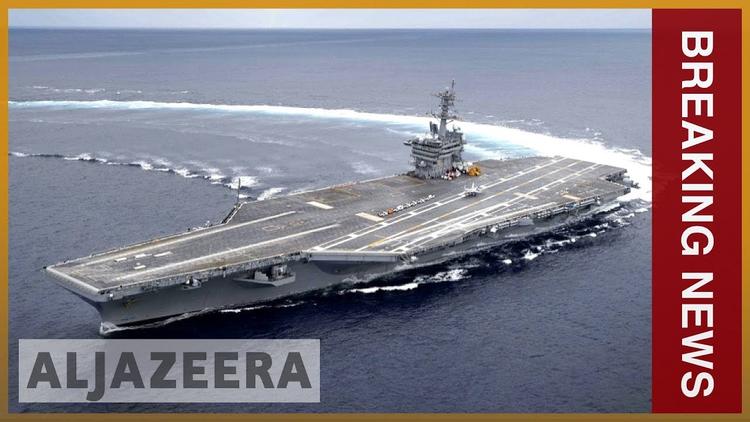 Ann Arbor (Informed Comment) – Uber warmongerers John Bolton and Mike Pompeo, somehow the National Security Adviser and Secretary of State of the United States, respectively, have sent an aircraft carrier battle group toward the Gulf in the vicinity of Iran, in hopes of provoking a military confrontation with that country.

Iran does not have so much as a battleship and has no air force to speak of, and so you do not actually need an aircraft carrier to deal with it. Back when Dick Cheney was trying to provoke Iran, late in the Bush administration, he also sent an aircraft carrier to the Gulf, and the snowflake conservatives were crying that Iranian skiffs had menaced it. Skiffs.

Fareed Zakaria did a piece on Bolton on Sunday in which he depicted him as just a very conservative man who sees the world as full of menacing enemies.

This picture of Bolton is a complete misreading. Bolton is a sadistic bully who wants to dominate people. He never got to be more than temporary UN ambassador under George W. Bush because he had mercilessly tortured his office staff. Bolton likes to hurt people who are weaker than he. He is not after Iran because he is afraid of it. He is after it because it is one of the last countries in the world still bucking the US power architecture and which is too weak to resist an all-out assault. He wants to see flies walking on the Iranians’ eyeballs and wants even their dogs to be f–ked.

Bolton is a maniac. Back in 2005 when Bush tried to slip him in at the UN, people testified against him because of, like, the maniac thing. Time wrote:

“One charge came from Melody Townsel, who dispatched an impassioned e-mail to the committee about her encounters with Bolton while working for a private subcontractor on a 1994 U.S. Agency for International Development (AID) mission in the former Soviet republic of Kyrgyzstan. Townsel says she wrote a letter to AID officials complaining about the lack of funds for the project from the contractor, a company that had hired Bolton as a lawyer. “Within hours after dispatching that letter,” Townsel told the committee, “my hell began. Mr. Bolton proceeded to chase me through the halls of a Russian hotel–throwing things at me, shoving threatening letters under my door and generally behaving like a madman … Mr. Bolton then routinely visited [my hotel] to pound on the door and shout threats.” Later, Townsel says, Bolton falsely told AID and other U.S. officials that she was under investigation for misuse of funds.”

He chased her through the halls of a hotel in Kyrgyzstan throwing things at her. And when he could not physically intimidate her, he spread smears against her, saying she was corrupt.

Bolton and Pompeo say that the aircraft carrier was sent because they had intelligence that Iran or an Iranian proxy planned an attack on US troops.

In fall of 2018, a couple of mortars were fired in Baghdad toward the then Green Zone where there were US military personnel, apparently by a Shiite militia. Bolton blamed the action on Iran, which generally backs Iraqi Shiite militias but does not have command and control over them. Then he sent over a note to the Pentagon asking for a plan for bombing Iranian soil in response to the ineffectual mortars over in Iraq.

Then secretary of defense James Mattis got wind of Bolton’s request, which had bypassed Mattis, and remonstrated that bombing Iran on such a pretext was unwise.

So when Bolton now says he has intel on a plot by Iran or a proxy to attack US troops, there is no reason whatsoever to believe him. For all we know four young Shiites in Sadr City were overheard wishing ill on foreign troops on Iraqi soil, and Bolton wants to blame Iran for the conversation.

Bolton is now chasing Iran through the halls of the Gulf, throwing things at it and trying to smear it.

Not to mention that Bolton has taken big bucks to address the Iranian expatriate terrorist group, the People’s Jihadis (Mojahedin-e Khalq) or MEK, so he seems actually to be hooked up with terrorists himself. The MEK is responsible for bombings in Iran that killed civilians and they were given bases by Saddam Hussein in Iraq,. NBC has reported that the MEK may be backed by Israeli intelligence, the Mossad.

The danger of having a mentally ill president is that he is easily manipulated, and Bolton and Pompeo have maneuvered Trump into a war footing with Iran– even though Trump ran on getting US troops out of the Middle East and ceasing spending all our money on fruitless wars over there.

Bolton and Pompeo have also convinced Trump to place an oil embargo on Iran through US control of world finance. If it were a physical embargo it would be an act of war. There is not any basis in international law for this unilateral set of sanctions. Iran is abiding by its obligations under the 2015 nuclear deal, as certified by the UN. The US is now squeezing Iran to the extent of taking food out of the mouths of people’s children. It is unlikely they will take that lying down.

Iran is a poor weak global south country with a military budget on the order of that of Norway or Singapore, a GDP the size of Thailand’s, which has no conventional military capacity. It isn’t threatening the US, it is the other way around. It made what amounted to a peace treaty with the US in 2015, which the US has violated. It spent blood and treasure to defeat ISIL in Iraq and Syria. It can be a bad actor, but it isn’t a significant threat to the US.

I don’t care for the form of government Iran has nor for most of its policies. But given the holy mess the US typically makes when it seeks regime change, I think it is much better that Iranians deal with their own bad governance. It is not as if American’s can boast of how enlightened an executive they how nowadays, anyway. What, is our argument that Trump is far superior to Hassan Rouhani?

So, Bolton and Pompeo may get the war they are plumping for. They didn’t think spending $6 trillion bankrupting ourselves in Iraq (for which we got what?) was enough. They want to chase it with another $12 trillion spent on destroying Iran.