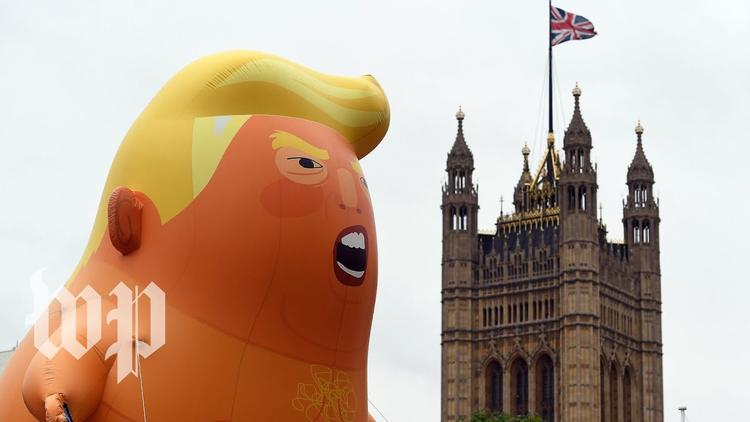 Ann Arbor (Informed Comment) – Trump feigned not to see them or imagined them as putting out a welcome mat for him, but the actual reaction of the British public to his visit was profound dismay that he was given state honors.

Washington Post: “Londoners protest Trump’s state visit: He ‘shouldn’t even be allowed in this country'”

Members of the protest crowd in London said that they feared Trump as a leader of a global wave of right wing populism, by which I think they mean racist fascism. British society is substantially to the left of the US and even most British Conservatives take stances on things like government services that would make them look like liberal Democrats in the United States.

Trump has a 21% approval rating in Britain. His predecessor Barack Obama is at 73%.

The opposition Labour Party, including its leader Jeremy Corbyn, joined the Duchess of Sussex, Meghan Markle, in declining to meet with Trump, who was pointedly not invited to address parliament. Markle had been critical of Trump before she married Prince Harry, and on learning of it recently he called her “nasty.” Despite having been caught on audio saying this, Trump denies that he said it.

In a BBC interview, Emily Thornberry, the shadow Foreign Minister for the opposition Labour Party said she was angry at Trump precisely because she loves America and the values that America stands for. She minced no words when explaining why she does not believe he should have been given a state visit, according to Zoya Sheftalovich at Politico.eu:

“A state visit is an honor, and we don’t think that this president deserves an honor. He is a sexual predator, he is a racist, and it’s right to say that. And I think we need to think about when is it that our country got so scared. Why can’t we start saying things as they are? . . . We’ve seen the way in which this current British government have tried to deal with Donald Trump, by fawning all over him, holding his hand, and what respect have we got as a result of it? . . . actually he admires strength. It’s like the way you deal with a bully. If you bow down in front of them, you get kicked harder.”

In the British parliamentary system, the main opposition party that is out of power forms a shadow cabinet with about twenty high party officials, who track and critique their counterparts, the actual cabinet members in power. Thornberrry’s opposite number is Jeremy Hunt, Secretary of State for Foreign and Commonwealth Affairs. Hunt has been a big booster of the Saudi war on Yemen and has defended ongoing massive weapons sales to Riyadh despite the murder of dissident journalist Jamal Khashoggi on the grounds that the weapons sales generate jobs in Britain.

Thornberry was for many years a human rights attorney before entering politics.

Trump’s visit to Britain was a huge disaster, despite the white tuxedos and hobnobbing with a few royals. Trump’s interactions were with people like Theresa May, the outgoing prime minister who failed to find a formula for Britain to leave the European Union without massive economic damage to the British economy. The opinion polling shows that the British people think they know who Donald Trump is, and they abhor him and all that he stands for. If Labour were to win the next election and Trump was still in power, relations between London and Washington would clearly turn extremely frosty.