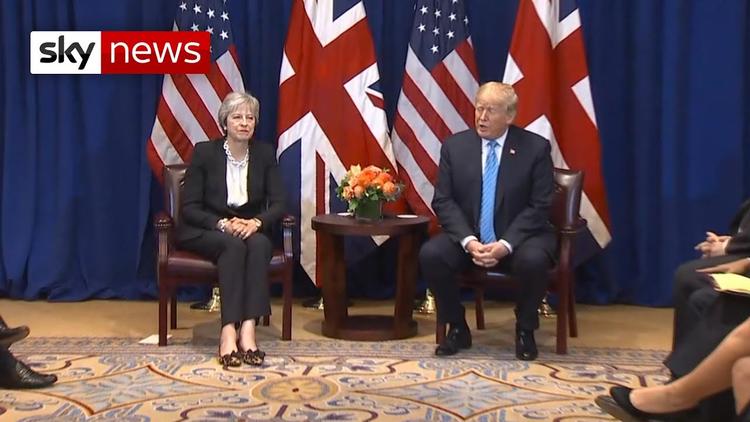 (Informed Comment) – Donald Trump’s military proliferation in the Middle East and further sanctions on Iran, aimed at isolating Tehran, have driven a deeper rift between the United States and the European Union – which opposes such actions. While Washington is ramping up pressure, and some fear that a conflict is drawing closer, the United Kingdom, America’s traditional close ally, remains at a crossroads. Yet while Britain had previously aligned itself Europe, it risks drifting further towards America’s stance, in order to maintain the “special relationship”, as Brexit drives it away from the EU.

While full-blown hostility is a distant prospect, further escalations could still proliferate. Especially if Trump continues to ramp up the pressure against Tehran and if small clashes gradually emerge from Washington’s suffocation of Iran. Furthermore, hawkish figures like John Bolton whispering in the President’s ear, and pressure from America’s regional allies who antagonize Iran, could steer Trump’s seemingly incoherent Iran stance towards a coherently aggressive one.

Meanwhile, Britain is inevitably torn. Previously a signatory of the Iran P5+1 deal in 2015, granting sanction relief to Tehran, the UK still sought to keep trade ties open with Iran following Trump’s tearing up of the agreement, and re-imposing of sanctions. However, it shows signs of wavering, and Britain’s historic alignment of foreign policy could re-emerge if Washington’s aggression heightens.

British ministers, particularly Foreign Secretary Jeremy Hunt had previously called for a de-escalation of tensions between Trump and Iran.

Yet it is important to look at how Britain has been involved in past America-led military campaigns in the wider region, and its susceptibility to following Washington’s lead on foreign policy issues, especially compared to other Western European countries.

Among the obvious cases, like Iraq and Afghanistan which had tarnished Britain’s foreign policy legacy, the UK even had a role in regime change in Iran in the past, with the MI6 and CIA jointly overthrowing Iran’s Mohammad Mossadegh in 1953 after attempting nationalize Iranian oil.

Despite its past attempts to seemingly commit to sanctions relief on Iran, UK Foreign Secretary Jeremy Hunt effectively summed up Britain’s position, writing in a recent tweet that after meeting US Secretary of State Mike Pompeo in May. “we share the same assessment of the heightened threat posed by Iran.”

Soon after, at a meeting in Geneva, Switzerland, Hunt then echoed the United States’ aggressive rhetoric, announcing: “if American interests are attacked, they will retaliate. And that is something that the Iranians needs to think about very, very carefully.”

Even Bolton himself seemingly declared this, stating that “there is no end to US-UK cooperation on global challenges and opportunities”.

British Special Ops forces have even reportedly joined US troops in the Gulf, in response to their proliferation, showing that Britain is covertly increasing its regional military presence.

Clearly the British government promotes Washington’s claims that Iran is a threat, and looks set to follow its lead on further proliferation.

Even if a conflict were to not break out, Iranian civilians continue to suffer anyway under harsh American sanctions, with living conditions plummeting and poverty rising as a result. Britain is offering little opposition to America’s sanctions, and could even support harsher sanctions on Iran, if it further aligns itself with America.

Yet along with the traditional ‘special relationship’, Brexit is also pushing Britain away from the EU’s stance and aligning it further with Washington. The UK parliament has failed to agree on a unified solution for Brexit, and therefore there is a risk that if the UK fails to agree on a deal with the EU, it will face great economic vulnerability and will drift towards its traditional allies like the US and regional countries like Saudi Arabia, to desperately secure trade.

Britain is already going down this path. The government already looks set to increase trade ties with Washington, leading to Britain becoming more dependent on American trade, and has therefore granted the US greater leverage over Britain.

A poorly planned Brexit may subordinate Britain further towards America’s foreign policy. With Trump at the helm in America, this could lead Britain to taking an even more aggressive foreign policy if the US President goes ahead with such a stance.

Furthermore, Britain could drift further towards Saudi Arabia, having drastically increased trade ties with Riyadh following the 2016 Brexit referendum. As analysts have suggested that a no-deal Brexit could leave Britain with less leverage over Riyadh and more dependency on ties with the Saudi Kingdom, this could lead Britain to supporting any face-off by Riyadh against Iran, or at least failing to subvert any Saudi antagonism towards Tehran.

There are voices within the UK establishment that have questioned Washington’s narrative about Iran, including a top British military official. Yet the fact this had gained much attention shows how rare it is for British figures to criticize Washington, and how London’s narrative is increasingly aligned with America’s.

Other figures like former Middle East Minister Alastair Burt have delivered surprising criticism towards Washington’s stance on Iran. Yet current ministers have shown no signs of listening.

Other determining factors of Britain’s future foreign policy stance could also include the next Prime Minister. Theresa May who is due to step down will be replaced by another Conservative Party candidate. Boris Johnson is considered a favoured candidate, and as a pro-Brexit candidate this would leave Britain more vulnerable towards drifting towards the United States, and therefore its political position. Trump has recently praised Johnson, suggesting that the two could share a similar stance on regional issues. Yet as the Conservative Party is driving Britain’s drift towards America, a general election would be a greater shot at changing Britain’s foreign policy alignment.

Clearly the UK risks drifting down a dangerous path. If Britain was able to unify with the rest of Europe’s stance on Iran, and more sensible, anti-war British political figures were able to push the UK government against joining Washington’s stance, this would give Europe greater leverage to oppose Washington’s increasingly aggressive stance and call for a positive solution for peace.