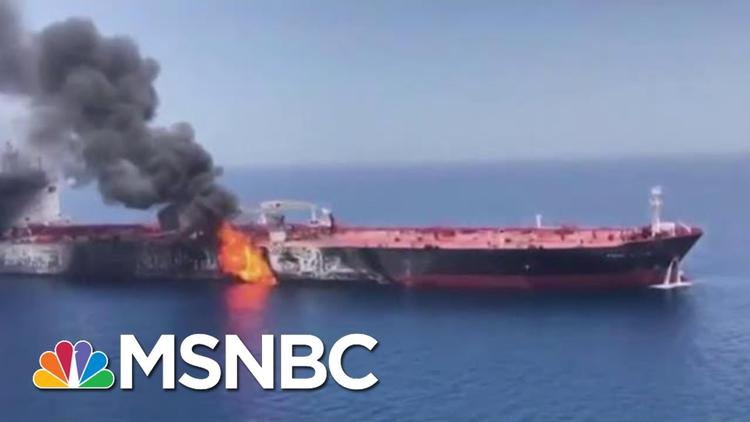 Ann Arbor (Informed Comment) – The Washington Post reports that when US Secretary of State “Benghazi Mike” Pompeo gave his breathless news conference last Thursday to finger Iran for the oil tanker explosions in the Gulf of Oman, he indicted Iran for another act of violence at the same time.

Mary Papenfus at HuffPo notes that on May 31 a suicide bomber attacked a US convoy in Kabul, killing four Afghan passers-by and wounding four American servicemen and at least three civilians.

The Taliban were not shy about taking responsibility– their spokesman, Zabiullah Mujahid, spoke to the Associate Press and boasted of the attack.

Pompeo painted the incident as one of “a series of attacks instigated by the Islamic Republic of Iran and its surrogates against American and allied interests.”

Pompeo’s statement is so embarrassing as to be cringe-worthy. It is either a lie in the service of war propaganda or a display of such bottomless ignorance on the part of America’s chief diplomat as to be grounds for impeachment (or perhaps just consignment to an asylum).

The Taliban are almost entirely drawn from the ranks of the Sunni Muslim Pushtun ethnic group in Afghanistan, some 44% of the country’s population of 35 million. They mostly dwell in the east and the south of the country, though there are significant pockets of Pushtuns up north (light green on the map below). They speak an Eastern Iranian language not mutually comprehensible with Persian that has been a vehicle for epic poetry. 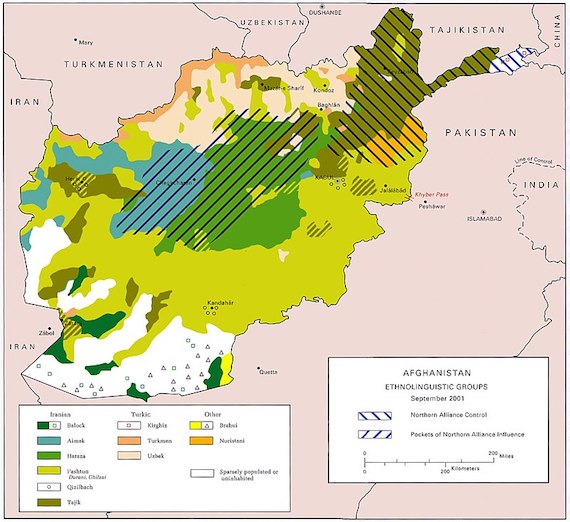 The Taliban ideology grew up among orphans and refugees during the period when 3 million Pushtuns were displaced by the Soviets to Pakistan and were put in seminaries or madrasahs that had strong Saudi influence.

There are other major Afghan ethnic groups. One is the Tajiks, also Sunni Muslims (brown on the map above). But they speak a dialect of Persian, the language spoken by a majority in Iran. Tajiks are mostly Sufi Muslims and dislike the rigid interpretation of the Taliban. The Tajiks were among the groups that held out against the Taliban from the Panjshir Valley, as part of the Northern Alliance.

Then there are the Uzbeks, about 10% of the population, who predominate in the far north near Uzbekistan (pink in the map above). They speak a form of Turkic and are followers of the Sunni Hanafi school of jurisprudence. Some are Sufis. Others are secular, influenced by Uzbekestan’s old Soviet modernism.

Then in the middle of the country are the Hazaras, who I think based on elections may be 22 percent of the population, or nearly 8 million people (dark green in the middle of the map above). They also speak Persian, but are Shiite Muslims. They typically have East Asian features and some historians think they are the remnants of the Mongols, who invaded and ruled the Middle East in the thirteenth and fourteenth centuries.

Some Hazaras lean toward Iran, but they are strong Afghan nationalists. Their Shiism is more folk and almost mythological, on the whole, than the bookish Shiism of the ayatollahs in Iran.

Now here’s the thing. Pushtuns generally have a certain amount of prejudice against Hazara Shiites, what with being Saudi-influenced Sunnis. The Taliban, as an extremist group with cult-like beliefs, absolutely hate, abhor and despise Shiites.

In 1998 when the Taliban were making their first push to conquer the whole country, they ran into trouble with the Hazara, who fought back fiercely. The Taliban massacred the Shiites.

The Taliban slaughtered the Shiite Hazara again in May 2000 and in January, 2001.

When the US invaded Afghanistan in the fall of 2001, Iran was so delighted at the prospect of the demise of the Taliban that Shiite leaders announced that they would gladly return to the US any American paratroopers who got blown by winds into Iranian territory.

Taliban targeting of Shiites has continued into this year. As a result, Hazaras are not optimistic about the outcome of the US peace talks with the Taliban.

During the Syrian civil war of the past few years, Iran recruited Hazaras into militias to fight on behalf of the regime of President Bashar al-Assad. The returnees continue to be viewed as Iranian assets inside Afghanistan.

Meanwhile, to the extent that the Taliban have foreign backing, it is widely thought to come from hyper-Sunni black cells inside Pakistan’s Inter-Services Intelligence or ISI.

The idea that Iran instigated or needed to instigate the Taliban to blow up something in Kabul is beyond bizarre.

Pompeo’s allegation is not new. There have been attempts to tie Iran to the Taliban by Pentagon officials and by partisans of Israel’s far-right Likud government for 15 years.

I wrote in 2010 after US cables were released by Wikileaks,

What they tell us:

In summer of 2009, it was revealed that Director of National Intelligence Dennis Blair informed the US Congress that, according to Marcus Baram at HuffPo,

“Iran is covertly supplying arms to Afghan insurgents while publicly posing as supportive of the Afghan government.” That includes the provision of small arms, mines, rocket-propelled grenades, rockets, mortars and plastic explosives. Ironically, Blair also noted that Iran has been assisting Afghanistan with developing their security capabilities through the “construction of border security facilities.”

What they tell each other:

According to a newly released wikileaks document, in February of this year, Secretary of Defense Robert M. Gates met with Italian Foreign Minister Franco Frattini. Afghanistan was on the agenda.

I have been saying for years that the occasional Pentagon or other USG allegations of Iranian support for the hyper-Sunni, Shiite-killing Taliban are just war propaganda. Iran has Afghan President Hamid Karzai on a $2 mn. a year retainer! Why would Tehran want to overthrow him? Gates told Frattini the real story, not the cover story.

So Wikileaks gave us a little window into how the discourse of US officials in private on Iran and the Taliban differs 180 degrees from their frankly ridiculous allegations in public. At the time of Gates’s conversation, Italy had NATO troops in Afghanistan and Gates could hardly mislead the Italian government about the situation without risking offending and lying to an ally.

Pompeo is trying to revive the old propaganda trick of tagging Iran with whatever forces out there oppose US imperial presence. His purpose is to put the US on a war footing with Iran. Next we’ll hear about Iran being in cahoots with North Korea… Oh, wait . . .