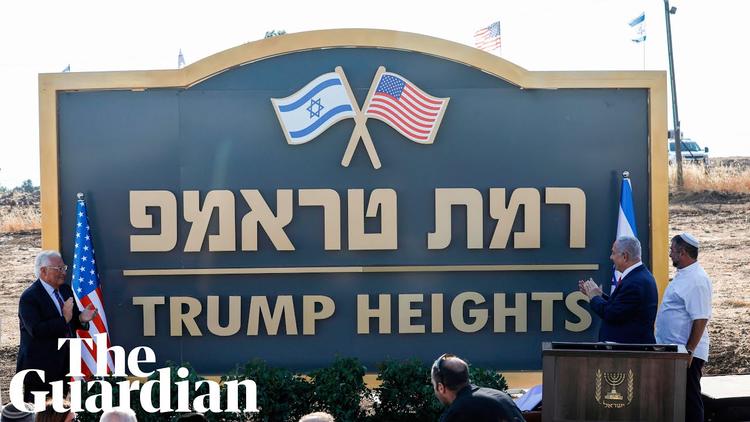 Ann Arbor (Informed Comment) – In a publicity stunt Trumpian in its iniquity and emptiness, the government of Israeli prime minister Binyamin Netanyahu put up a sign in the Occupied Syrian Golan Heights, saying “Trump Heights.”

There isn’t really any settlement there yet, just a sign, just as there isn’t any reality to Trump more generally, just an empty suit.

Given that Trump is a narcissistic fraud, it is appropriate that his name be attached to the illegal Israeli theft of Syrian territory. In fact, we should just call the Occupied Palestinian Territories in general Trumpland, a fraud and form of robbery like his “university” and “steaks” and “airline.”

One of the pretexts that the Bush administration gave for invading Iraq was that they maintained Iraq had not complied with UN Security Council resolutions on disarming. We now know Iraq did destroy its stockpile of chemical weapons and mothball its feeble nuclear research, but the Bush people would not accept these assertions and said they invaded to enforce the will of the United Nations Security Council. This, even though the UNSC of 2003 declined to authorize any such thing.

A fairly stupid course with this legal premise was taught at Yale for years by one of the Bush conspirators.

Then, there was the case of Libyan dictator Moammar Gaddafi, whom the UNSC ordered to cease trying to massacre his own people, and when he sent tanks against Misrata, the UNSC authorized the imposition on Libya of a no-fly zone.

So the UNSC is the body in the world that decides whether military action is needed and whether it is legitimate. It can impose sanctions for non-compliance with its resolutions, as it did to Iran and Iraq. It can even authorize the overthrow of a government.

So what did the United Nations Security Council say about Israel’s illegal annexation of the Syrian Golan Heights?

Having considered the letter of 14 December 1981 from the Permanent Representative of the Syrian Arab Republic contained in document S/14791,

Reaffirming that the acquisition of territory by force is inadmissible, in accordance with the United Nations Charter, the principles of international law, and relevant Security Council resolutions,

1. Decides that the Israeli decision to impose its laws, jurisdiction and administration in the occupied Syrian Golan Heights is null and void and without international legal effect;

2. Demands that Israel, the occupying Power, should rescind forthwith its decision;

3. Determines that all the provisions of the Geneva Convention Relative to the Protection of Civilian Persons in Time of War of 12 August 1949 continue to apply to the Syrian territory occupied by Israel since June 1967;

4. Requests the Secretary-General to report to the Security Council on the implementation of this resolution within two weeks and decides that in the event of non-compliance by Israel, the Security Council would meet urgently, and not later than 5 January 1982, to consider taking appropriate measures in accordance with the Charter of the United Nations.

So you see, “Trump Heights” is illegal in international law in just the same way as Gaddafi’s repression of his people or Saddam Hussein’s chemical weapons were illegal.

The UNSC only hasn’t imposed economic sanctions on Israel over this annexation of a neighbor’s territory because the US has a veto, and exercises it on Israel’s behalf, coddling outlaw actions.

The Israelis have a cover story that they used to be shelled from the Golan in the 1960s and they have to occupy it to stop that. But it is the other way around. Ben Gurion wanted the Golan the same way he wanted southern Lebanon and the Sinai Peninsula. In the mid-60s, Israeli military memoirs show that the Israelis hit the Golan in hopes that Syria would fire back, giving the Israelis a pretext for annexation. In today’s world, anyway, where Israel has the most sophisticated fighter-jets on the planet, they don’t need to occupy Syria’s Golan to keep themselves safe. In fact the 250,000 Israeli squatters they plan to send up there are more exposed and less secure than they would be in Tel Aviv, by a long shot.

Apart from all that, unilaterally annexing your neighbor’s land after conquering it militarily is *illegal* according to the UN Charter, which the US and Israel both signed. The framers put that language in the charter in hopes of preventing episodes like Mussolini’s annexation of Nice from France during WW II. Instead of being grateful to the UN for establishing a new framework of international law that allowed Jews to thrive after WW II ended, the Israeli far right has played Mussolini, assiduously attempting to undermine international law wherever it gets in the way of their rogue expansionism.

All of this sordid story is about double standards and white privilege. Other countries in the Middle East have suffered tremendously for defying the UNSC. The far right wing government of Israel can openly steal its neighbors’ land with no consequences.

And that is why Trump Heights is such a great name for the colony built on theft, since Trump’s whole life has been about being wealthy and powerful enough to escape the consequences of his crimes.