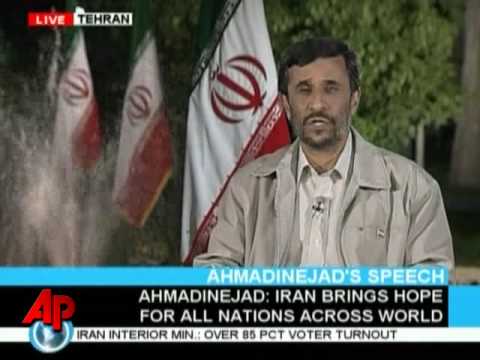 (Informed Comment) – June 12, 2019 marks the tenth anniversary of what sparked the Green Uprising in Iran. While many have noted that it was a “failed revolution” because it was unsuccessful in abrogating the controversial election results or toppling the state that ratified them, it enjoyed many subtle victories, one of which matters today in terms of US-Iran tensions: The uprising humanized Iranians.

On June 12, 2009, millions of Iranians went to the polls to participate in the country’s tenth presidential election. While there were four candidates, the real race was between the incumbent, Mahmoud Ahmadinejad, and the reformist, Mir Hossein Mousavi.

For the first time in contemporary Iran, a candidate’s wife was also actively involved in the campaign. Zahra Rahnavard did not merely stand beside her husband during speeches, but gave her own fiery orations, giving voice to issues like human rights and gender equality that resonated with Iranians in general and women in particular. As such, women were an integral part of both the pre-election campaigning as well as the post-election uprising.

The night of the vote, the state proclaimed its favored candidate, Ahmadinejad, the winner. With widespread allegations of fraud, Iranians refused to accept the result leading to a tumultuous next day. It was, however, the second day after the election results that the movement really began to take shape with mass participation and increasing discipline—with even marches conducted in total silence. By Monday, June 15, a massive crowd of around three million gathered in the capital.

The following Friday, the country’s supreme leader, Ayatollah Ali Khamenei, gave a rare sermon as the gravity of the occasion summoned him. He affirmed the Guardian Council’s ratification of the results, blamed the protests on outside powers, concluded that the uprising’s continuity threatened national security, and ruled that a full-scale crackdown would be in force the following day.

An ominous sign, foreign journalists were ordered out of the country so that nobody would be able to cover what was ahead. The Digital Age, however, had arrived, and Iranians wielded their camera-equipped-phones to capture events as they unfolded on the streets of Iran; they televised their own pixelated revolution.

It was the next day after what activists termed Khamenei’s “Sermon of Blood” that the movement claimed a poster boy—except that it was not a boy but a 26-year-old woman. Neda Agha Soltan’s dramatic death was filmed and uploaded onto YouTube, and the footage of her death was picked up by international media and broadcast to the world—with one writer calling her murder “probably the most widely witnessed death in human history.”

Her killing also served as a testament to the state’s repression, and the movement’s tactics evolved. Instead of protesting everyday like before, protesters emerged only on political holidays when the state encouraged people to come out and show their support for the government that instituted those very days. One such day was the anniversary of the seizure of the US embassy—what one American writer likened to Iran’s equivalent of the Boston Tea Party (but with hostages) since it was through the embassy that the US and Britain overthrew Iran’s democratically elected government in 1953. Green Movement activists appropriated these state-sanctioned holidays in order to castigate that very state, and the uprising endured sporadically in such a manner until February 11, 2010.

Many legacies of the Green Uprising abound. First, the political taboo of publicly criticizing Khamenei was shattered. Second, activists upended and reprogrammed all of the state’s symbols of legitimation against that very polity. For instance, protesters came out on the anniversary of the American embassy seizure not to condemn the US—as was the norm for the preceding three decades—but Russia, which was one of the first countries to congratulate Ahmadinejad on his election “win.”

The third legacy is relevant to Iran-US tensions today. The manner in which Iranian activists filmed and broadcast their uprising via social media humanized Iranians. Before 2009, Americans largely saw Iran through the prism of its government, terrorism, and angry, zealous, bearded hostage-takers—not the heterogenous and dynamic society that at the time was home to over 70 million people. Through impromptu citizen journalism, Green Movement activists shattered that narrow lens and gave the world a panoramic view onto their country. This wider scope made war with a seemingly Iranian monolith all the more difficult to justify, leading one commentator at the time to recognize: “Imagine the revulsion if such air strikes, as they regularly do in Afghanistan, led to the unintended deaths of dozens or more of the very Iranians who are being cheered in the streets today.”

10 years on, the humanizing legacy of the Green Uprising matters today as the Trump administration is sanctioning Iran with the stated goal of affecting “regime change” under the premise that Iranians deserve better.

The most problematic aspect of this savior complex, however, is that it is harming the very Iranians the administration is purported to be helping. Sanctions are expected to cause inflation to potentially reach has high as 40 percent this year. Iranians are already suffering the consequences as their life savings have evaporated overnight. Spiraling inflation has caused a shortage of life-saving medicine and has affected daily patterns of consumption, such as costing workers a third of their monthly salary to buy two pounds of meat for their families. Not only are they consuming less meat, but Iranians are hosting their friends and families less frequently as decreasing numbers of people can afford to do so, which is fostering a sense of isolation for many, especially the elderly. To be sure, the sanctions are negatively affecting the very fabric of Iranian society.

The sanctions are also having a detrimental effect on Iranian culture, as sanctions-induced inflation is harming Iran’s famed film industry by cutting budgets and funding sources thereby facilitating a sharp drop in production. Even newspapers are suffering at a time when Iranian journalists already face a repressive environment, but now have to contend with ink and paper shortages.

The Green Uprising failed to undo the election results, but it succeeded in many other ways. The one success that stands out in the context of the Trump administration starving an economy that today sustains over 83 million people is that it showed the world that Iran is a country of people with hopes and aspirations like many others.

Today, the humanizing legacy of the Green Movement demands an alternative method of conflict resolution than war and sanctions.

Pouya Alimagham is a historian of the modern Middle East at Massachusetts Institute of Technology, and author of the forthcoming Contesting the Iranian Revolution: The Green Uprisings (Cambridge University Press). Follow him on Twitter @iPouya.