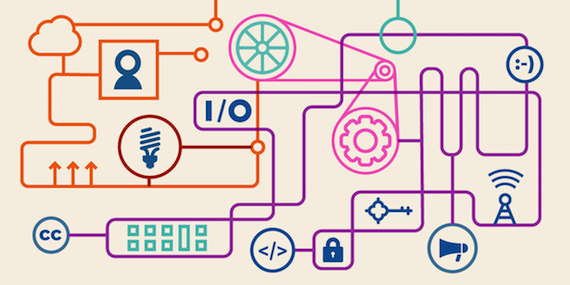 Let’s start with a taxonomy of interoperability:

This is the most common form of interoperability. Company A makes a product and Company B makes a thing that works with that product, but doesn’t talk to Company A about it. Company A doesn’t know or care to know about Company B’s add-on.

Think of a car’s cigarette lighter: these started in the 1920s as aftermarket accessories that car owners could have installed at a garage; over time they became popular enough that they came standard in every car. Eventually, third-party companies began to manufacture DC power adapters that plugged into the lighter receptacle, drawing power from the car engine’s alternator. This became widespread enough that it was eventually standardized as ANSI/SAE J563.

Standardization paved the way for a variety of innovative new products that could be made by third-party manufacturers who did not have to coordinate with (or seek permission from) automotive companies before bringing them to market. These are now ubiquitous, and you can find fishbowls full of USB chargers that fit your car-lighter receptacle at most gas stations for $0.50-$1.00. Some cars now come with standard USB ports (though for complicated reasons, these tend not to be very good chargers), but your auto manufacturer doesn’t care if you buy one of those $0.50 chargers and use it with your phone. It’s your car, it’s your car-lighter, it’s your business.

Sometimes, companies are eager to have others create add-ons for their products and services. One of the easiest ways to do this is to adopt a standard: a car manufacturer that installs an ANSI/SAE J563-compliant car-lighter receptacle in its cars enables its customers to use any compatible accessory with their cars; any phone manufacturer that installs a 3.5mm headphone jack allows anyone who buys that phone to plug in anything that has a matching plug, even exotic devices like Stripe’s card-readers, which convert your credit-card number to a set of tones that are played into a vendor’s phone’s headphone jack, to be recognized and re-encoded as numbers by Stripe’s app.

Digital standards also allow for a high degree of interoperability: a phone vendor or car-maker who installs a Bluetooth chip in your device lets you connect any Bluetooth accessory with it—provided that they support that device, or at least that they make no steps to prevent that device from being connected.

This is where things get tricky: manufacturers and service providers who adopt digital standards can use computer programs to discriminate against accessories, even those that comply with the standard. This can be extremely beneficial to customers: you might get a Bluetooth “firewall” that warns you when you’re connecting to a Bluetooth device that’s known to have security defects, or that appears on a blacklist of malicious devices that siphon away your data and send it to identity thieves.

In the digital era, cooperative interoperability is always subject to corporate boundaries. Even if a manufacturer is bound by law to adhere to a certain standard—say, to provide a certain electronic interface, or to allow access via a software interface like an API—those interfaces are still subject to limits that can be embodied in software.

A digitally enabled car-lighter receptacle could be made to support only a limited range of applications—charging via USB but not USB-C or Lightning, or only charging phones but not tablets—and software could be written to enforce those limits. Even a very permissive “smart lighter-receptacle” that accepted every known device as of today could be designed to reject any devices invented later on, unless the manufacturer chose to permit their use. A manufacturer of such a device could truthfully claim to support “every device you can currently plug into your car lighter,” but still maintain a pocket veto over future devices as a hedge against new developments that it decides are bad for the manufacturer and its interests.

What’s more, connected devices and services can adjust the degree of interoperability their digital interfaces permit from moment to moment, without notice or appeal, meaning that the browser plugin or social media tool you rely on might just stop working.

Which brings us to…

Sometimes an add-on comes along that connects to a product whose manufacturer is outright hostile to it: third-party ink for your inkjet printer, or an unauthorized app for your iPhone, or a homebrew game for your console, or a DVR that lets you record anything available through your cable package, and that lets you store your recordings indefinitely.

Many products actually have countermeasures to resist this kind of interoperability: checks to ensure that you’re not buying car parts from third parties, or fixing your own tractor.

When a manufacturer builds a new product that plugs into an existing one despite the latter’s manufacturer’s hostility, that’s called “adversarial interoperability” and it has been around for about as long as the tech industry itself, from the mainframe days to the PC revolution to the operating system wars to the browser wars.

But as technology markets have grown more concentrated and less competitive, what was once business-as-usual has become almost unthinkable, not to mention legally dangerous, thanks to abuses of cybersecurity law, copyright law, and patent law.

Taking adversarial interoperability off the table breaks the tech cycle in which a new company enters the market, rudely shoulders aside its rivals, grows to dominance, and is dethroned in turn by a new upstart. Instead, today’s tech giants show every sign of establishing a permanent, dominant position over the internet.

As states grapple with the worst aspects of the Internet—harassment, identity theft, authoritarian and racist organizing, disinformation—there is a real temptation to “solve” these problems by making Big Tech companies legally responsible for their users’ conduct. This is a cure that’s worse than the disease: the big platforms can’t subject every user’s every post to human review, so they use filters, with catastrophic results. At the same time, these filters are so expensive to operate that they make it impossible for would-be competitors to enter the market. YouTube has its $100 million Content ID copyright filter now, but if it had been forced to find an extra $100,000,000 to get started in 2005, it would have died a-borning.

But assigning these expensive, state-like duties to tech companies also has the perverse effect of making it much harder to spark competition through careful regulation or break-ups. Once we decide that providing a forum for online activity is something that only giant companies with enough money to pay for filters can do, we also commit to keeping the big companies big enough to perform those duties.

Interoperability to the Rescue?

It’s possible to create regulation that enhances competition. For example, we could introduce laws that force companies to follow interoperability standards and oversee the companies to make sure that they’re not sneakily limiting their rivals behind the scenes. This is already a feature of good telecommunications laws, and there’s lots to like about it.

But a mandate to let users take their data from one company to another—or to send messages from one service to another—should be the opener, not the end-game. Any kind of interoperability mandate has the risk of becoming the ceiling on innovation, not the floor.

For example, as countries around the world broke up their national phone company monopolies, they made rules forcing them to allow new companies to use their lines, connect to their users and share their facilities, and this enabled competition in things like long distance service.

But these interoperability rules were not the last word: the telcos weren’t just barred from discriminating against competitors who wanted to use their long-haul lines; thanks to earlier precedent, they were also not able to control who could make devices that plugged into those lines. This allowed companies to make modems that could connect to phone lines. As the Internet crept (and then raced) into Americans’ households, the carriers had ample incentive to control how their customers made use of the net, especially as messaging and voice-over-IP eroded the massive profits from long-distance and SMS tariffs. But they couldn’t, and that helplessness to steer the market let new companies and their customers create a networked revolution.

The communications revolution owes at least as much to the ability of third parties to do things that the carriers hated—but couldn’t prevent—as it does to the rules that forced them to interconnect with their rivals.

Fix the Internet, Not the Tech Companies

The problems of Big Tech are undeniable: using the dominant services can be terrible, and now that they’ve broken the cycle of dominance and dethroning, the Big Tech companies have fortified their summits such that others dare not besiege them.

Today, much of the emphasis is on making Big Tech better by charging the companies to filter and monitor their users.

The biggest Internet companies need more legal limits on their use and handling of personal data. That’s why we support smart, thorough new Internet privacy laws. But laws that require filtering and monitoring user content make the Internet worse: more hostile to new market entrants (who can’t afford the costs of compliance) and worse for Internet users’ technological self-determination.

If we’re worried that shadowy influence brokers are using Facebook to launch sneaky persuasion campaigns, we can either force Facebook to make it harder for anyone to access your data without Facebook’s explicit approval (this assumes that you trust Facebook to be the guardian of your best interests)—or we can bar Facebook from using technical and legal countermeasures to shut out new companies, co-ops, and projects that offer to let you talk to your Facebook friends without using Facebook’s tools, so you can configure your access to minimize Facebook’s surveillance and maximize your own freedom.

The second way is the better way. Instead of enshrining Google, Facebook, Amazon, Apple, and Microsoft as the Internet’s permanent overlords and then striving to make them as benign as possible, we can fix the Internet by making Big Tech less central to its future.

It’s possible that people will connect tools to their Big Tech accounts that do ill-advised things they come to regret. That’s kind of the point, really. After all, people can plug weird things into their car’s lighter receptacles, but the world is a better place when you get to decide how to use that useful, versatile ANSI/SAE J56-compliant plug—not GM or Toyota.