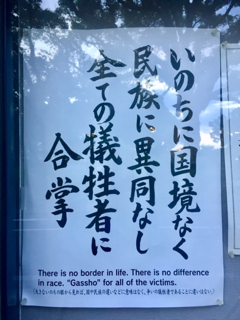 (Informed Comment) – Hiroshima—Saikoji, a small temple of the Jodo Shinshu school of Buddhism to which a majority of Hiroshima’s citizens belong, stands just across the street from the Atomic Bomb Dome. It often displays selected words of wisdom at the entrance—this month, to mark the 74th anniversary of the atomic bombing of August 6, 1945, the plaque simply read “There is no border in life. There is no difference in race. ‘Gassho’ (prayer) for all the victims.”

So much truth about nuclear weapons, in just three short sentences.

Cascading bad news such as the unravelling of the Iran nuclear deal, and the collapse of the checks and balances painstakingly put in place over decades to manage the nuclear Damocles Sword over our collective necks, seemed on everyone’s mind this August 6 in Hiroshima—a palpable sense if not of outright despair, then certainly of gloom. As a pelting rain swept across the Peace Memorial Park where 50,000 people had gathered, the usually calm and restrained Governor of Hiroshima, Hidehiko Yuzaki, voicing the sentiments of many, poignantly asked, ‘Why are some countries allowed to possess nuclear weapons that can inflict a trauma that remains incurable for 74 years or more? Why are they allowed to threaten other countries to use their nuclear arsenals?’ Is it really permissible to cause such a catastrophe?’

The nuclear genie, brought out of the bottle at Alamogordo in New Mexico on July 16, 1945, has been devouring in recent years and one by one most of our collective defenses against it. As Ernest J. Moniz and Sam Nunn write chillingly in this month’s Foreign Affairs, there is a ‘deliberate and accelerating breakdown of the arms control architecture that for decades provided restraint, transparency, and predictability for each side’s conventional and nuclear forces.’ They convincingly argue that decaying agreements and mind sets, with ever more sophisticated weapons, cyber technologies and AI make our era one of the more dangerous in the planet’s history. Other global crisis, especially climate change, can but exacerbate the fragile balance.

The International Physicians for the Prevention of Nuclear War (IPPNW) has estimated that even a small-scale limited nuclear war between India and Pakistan for example, one that would involve only 0.03% of the world’s nuclear weapon capacity, could risk the starvation of almost two billion people, notably in the Indian subcontinent and China. For her part the essayist Elaine Scarry, in a lecture at the Nuclear Age Peace Foundation earlier this year, raised the mortifying thought of how just a small handful of people—to be really stark, maybe just nine—have their finger on the nuclear button, and therefore on our collective destiny. No parent can sleep peacefully after reading this.

Time is not on our side. The 2017 Treaty on the Prohibition of Nuclear Weapons (TPNW), or the Nuclear Weapon Ban Treaty, championed by the International Coalition to Abolish Nuclear Weapons (ICAN) and supported by a few enlightened states and the United Nations, is steadily building momentum, but is still only half way to entry into force—24 of the required 50 states have ratified. Unlike most other global issues, nuclear weapons remain the quasi monopoly of states (for now). This is true not just in countries with little democratic checks and balances like China, Russia or North Korea, but even in democracies like the US, UK, France, India, Pakistan and Israel. If so, then surely the case must be taken more urgently to the seemingly distracted but potentially powerful global citizenry?

The UN, ICAN and others groups like the International Committee of the Red Cross (ICRC) are trying. The ICRC has produced one of the shortest and most effective videos to date on the impact of a nuclear war (https://www.icrc.org/en/document/icrc-world-ready-face-nuclear-war-no-so-lets-ban-bomb) —in just 1:51 minutes the film does more for the anti-nuclear cause than many pious declarations. More, much more is needed however. We must cease to be distracted by trivia, and refocus laser-like on humanity’s most urgent threat, mobilizing the talents of the best and the brightest—the most creative film makers and artists, scholars, inventors and business leaders around the world, from whichever ‘side’ they may be—to make the case for a nuclear-free world. We must find ways to do so as meaningfully in Beijing as in Moscow, in Washington, New Delhi or Islamabad.

ICAN has done well too, by mobilizing the young, and by going for the jugular—i.e. tracing the money. In 2012 it had estimated that worldwide nuclear weapons cost a hefty US $300 million a day (considering how opaque most nuclear-weapon budgets are, this is most likely below the real cost). Meanwhile ICAN’s Don’t Bank on the Bomb campaign is picking momentum, pressuring corporations, banks, pension funds and the like to drop out of the bomb business. In democratic countries it is also easier to identify and expose companies benefitting from the macabre nuclear trade.The lion’s share of nuclear weapon development contracts in the United States for example is held by just a handful of corporations. Aggressive divestment campaigns, and strategies to expose and shame non-ethical companies, could put them on the defensive.

The sheer number and power of nuclear weapons today can make the bombs that plunged Hiroshima and Nagasaki into nuclear hell 74 years ago seem almost benign. But as the Governor said even here we glimpse merely the outward expressions of grief—we will never know the reality of nuclear horror and the suffering behind the dignified exteriors of survivors. Many hibakusha dedicated their lives to remembering the calamity of that day and its aftermath, so that we may not forget. Now they watch the crumbling of all they worked for, their dreams for a non-nuclear world.

My friend the Hiroshima architect Akio Nishikiori often describes his childhood memories of the pre-WWII Hiroshima, something of a small Venice with its many rivers and taxi-gondolas. On summer nights his family would eat at cafés along the river and stroll the bustling streets of Nakajima district, then the central shopping and entertainment center. All that vanished with the bomb when Akio was eight. His sister Hisako, who was 14, was killed and Hiroshima almost disappeared into the dark side. The erudite and humanist Akio has dedicated his life to rebuilding his city, and now almost 82, continues to fight for peace every day. But Akio and other citizens of Hiroshima and Nagasaki alone cannot save us from nuclear annihilation. We must step up, all of us, now—this is by far our most urgent mission.

Nassrine Azimi co-founded and currently coordinates the Green Legacy Hiroshima Initiative (http:www.unitar.org/greenlegacyhiroshima), a global campaign to disseminate and plant worldwide seeds and saplings of trees that survived the 1945 atomic bombing of Hiroshima. At the United Nations Institute for Training and Research (UNITAR) Azimi established the Hiroshima Office for Asia and the Pacific in 2003, and was its first director until 2009. Prior to her work in Hiroshima she had been UNITAR’s coordinator of environmental training programs, deputy to the executive director, and chief of the Institute’s New York Office, which she reopened in 1996 and directed for five years. She is currently a senior advisor at the Institute. Azimi has published extensively on UN peacekeeping and peace-building, post-conflict reconstruction, environmental and cultural governance, and Asia. Her latest book, published in July 2019 by Amsterdam University Press, is titled The United States and Cultural Heritage Protection in Japan (1945-1952)