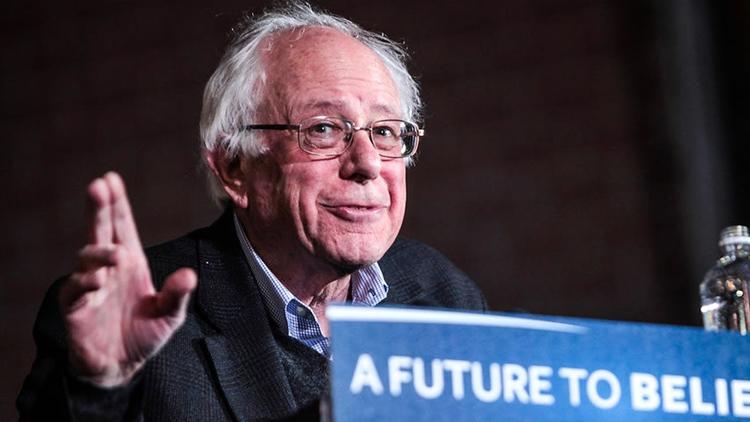 Ann Arbor (Informed Comment) – Sen. Bernie Sanders’ breathtaking Green New Deal, with an advertised price tag of $16.3 trillion, is aimed at nothing less than saving the planet from the worst consequences of global heating.

The plan aims to create 20 million new, well-paying jobs. It should be noted that one possible outcome of big Federal R&D monies and a rapid shift to renewables would be to revivify the US industrial sector, which has fallen to only 12 percent or so of the US GDP. Although the price tag seems formidable, Sen. Sanders points out that climate inaction will cost $34 trillion (I would add, at the very least) by 2100.

Yuval Rosenberg at the Fiscal Times quotes the response of the centrist Third Way think tank, which appears to represent mainly investment bankers, as criticizing Sanders’ plan on a number of points. They lament that he sidelines nuclear energy and carbon capture, and that his goal of getting rid of gasoline vehicles by 2030 is not realistic. If you reason back from these positions, what is being said is that moving quickly off coal, oil and gas is undesirable. Who would say that? Big coal, big oil and big gas, the profits of which are beloved of investment bankers. Likewise, big nuclear.

So let me explain why the critique from Third Way is pernicious. First, there is no such thing as affordable, safe, carbon capture. It is a unicorn. Even if CO2 could be captured, storing carbon dioxide gas would be extremely dangerous. When CO2 leaked from under a lake in the Cameroons, it killed thousands of people living on its shores.

Second, nuclear energy is useless in our new energy regime. Wind and solar will be the backbone, and they are intermittent. The sun doesn’t shine at night, wind often calms during the day. Until we get Big Battery capacity (which is coming rapidly), you need a baseline source of power that can be easily phased in and out. That is either hydro where it exists, or natural gas. It takes way too long to power down a nuclear plant and then power it back up. It is useless. Not to mention that the nuclear waste cannot be safely disposed of and poses very long term contamination problems. Not to mention that the plants can melt down and damage riparian ecosystems. Worst of all, nuclear-generated electricity costs 11 cents a kilowatt hour. New solar and wind bids are being let for less than 3 cents a kilowatt hour, even cheaper than coal.

As for taking transportation electric quickly, of course that can be accomplished. Maybe it won’t happen in a US dominated by Big Oil, but Sanders intends to push those corporations aside and institute a Federal industrial policy that can make things happen. The analogy is what Franklin Delano Roosevelt accomplished during World War II, when US industrial capacity vastly expanded and 16 million men were mobilized and Social Security was implemented.

These things aren’t as hard as they look, though admittedly it is a massive undertaking. In the US, 17.2 million light vehicles are sold annually, so in ten years that is 172 million. There are 272 mn. light vehicles on the road. So I conclude that the market replaces 64% of the vehicle stock every decade (helped by planned obsolescence). Therefore, if you require that all new vehicles be electric, you’d switch out 64% of the gasoline cars in a decade. (Chine already today makes an $8000 EV; so can Detroit if they’re incentivized). Putting in more public transportation and incentives for using it would make many of the other vehicles redundant. Trade-in incentives could mothball those that are left. The Obama administration already did a small version of this sort of buy-back, taking older polluting gas guzzlers off people’s hands for a rebate on a new vehicle. Trump’s tax cut on billionaires cost trillions, and over a decade his increase in the war budget will also cost trillions. The US spends more on war than the next 14 countries combined, and is expected to spend $7 trillion on “defense” over the next decade, even though we have no peer powers. Nobody thought those things impossible or fantastic.

Britain spends $45 bn. a year on defense and it has 1/4 the population of the US, so that is as though the US spent less than $200 billion a year on the Pentagon. We could go down to that and save a trillion dollars every two years for useful and productive things instead of for bombs to sell the Saudis to drop on Yemeni children. The US military is among the biggest carbon-emitting organizations in the world, so maybe we could cut those emissions, too. Bernie’s plan would be paid for in this way alone in about 32 years.

The plan is set to pay for itself over 15 years in these ways:

Making the fossil fuel industry pay for their pollution, through litigation, fees, and taxes, and eliminating federal fossil fuel subsidies.

Generating revenue from the wholesale of energy produced by the regional Power Marketing Authorities. Revenues will be collected from 2023-2035, and after 2035 electricity will be virtually free, aside from operations and maintenance costs.

Reduced need for federal and state safety net spending due to the creation of millions of good-paying, unionized jobs.

Making the wealthy and large corporations pay their fair share.

The selfish and greedy elites of the US Establishment will attempt to kill this plan just in the same way that they are killing the planet. It will only succeed if the public rallies to it, urgently seeking to limit the damage to their children’s and grandchildren’s lives done by carbon dioxide, methane, and the rest.