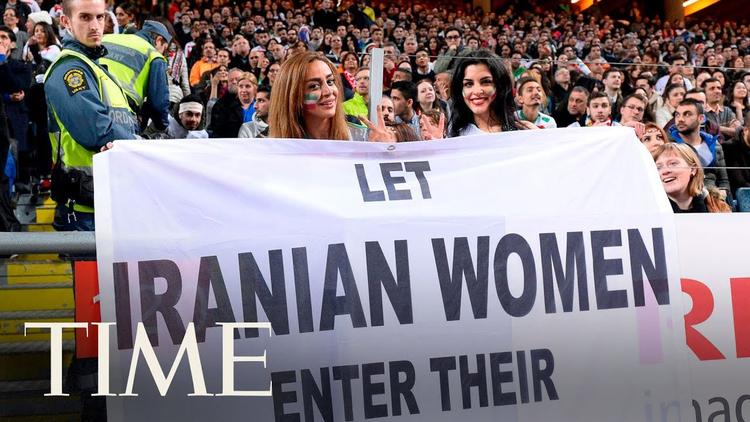 (RFE/RL) -The captain of Iran’s national soccer team has renewed his criticism of a ban on female spectators following reports a young Iranian woman set herself alight after being sentenced to prison for trying to attend a men’s soccer match.

Masoud Soleimani Shojaei — who is considered a national hero — said on September 6 that the ban was the result of “rotten and disgusting thinking.”

Women are banned from attending male sporting events in Iran. In past years, only selected groups of women have been allowed into stadiums to watch soccer matches or other men’s sporting events.

Devoted female soccer fans have managed to defy the ban on rare occasions by disguising themselves as men.

“Just as…[forcefully preventing women from unveiling] or not allowing women to study shock us and make us condemn the medieval thinking of our ancestors, today the setting alight of a woman…who was charged after attempting to watch a football match — the result of rotten and disgusting thinking — will be incomprehensible to future [generations],” Shojaei said in a live post to the more than 400,000 followers on his Instagram accounts.

Shojaei — who also expressed support for the 2009 Green Movement — has criticized the ban in the past and said that being able to watch soccer matches was something many female Iranian soccer fans dream of. He has also said he regrets that his mother, sister, and wife are unable to watch him play in Iran in person.

The unnamed, 29-year-old woman set herself on fire outside a court in the Iranian capital earlier this week, domestic media reported. She is said to be hospitalized in serious condition.

Her sister was quoted as saying that the woman — who loves soccer — has burns over 90 percent of her body and that her lungs are damaged.

She said her sister was bipolar and had suffered from mental problems in the past and had once before tried to commit suicide.

The woman said her sister attempted in mid-March to sneak into a soccer match at Tehran’s Azadi Stadium while wearing a blue wig and wearing a long coat.

She told the security guards that she was a woman after they tried to search her, according to her sister. “They arrested her right there,” she said in a September 5 interview with Shahrvandonline.ir.

The woman spent a few days in jail and was later released on bail. Her sister said the family had informed judiciary officials about her psychological problems.

The sister said that after the jailing the woman’s behavior changed and that it worsened when she heard she could be jailed for six months.

She went to court in Tehran on September 2 and reports said she poured gasoline over her body and set herself alight after leaving the courtroom.

An unnamed official was quoted by media outlets as saying the young woman had been arrested for not being sufficiently veiled and for clashing with security guards.

He said her court hearing did not take place because the judge assigned to the case was not present.

The woman’s plight has led to great anger on social media and condemnation of the ban on female spectators.

The incident comes as pressure is being exerted on Iran by soccer’s world governing body, FIFA, to abolish — or to some degree relax — the ban that Iranian officials have enforced for nearly 40 years on women attending men’s sports events.