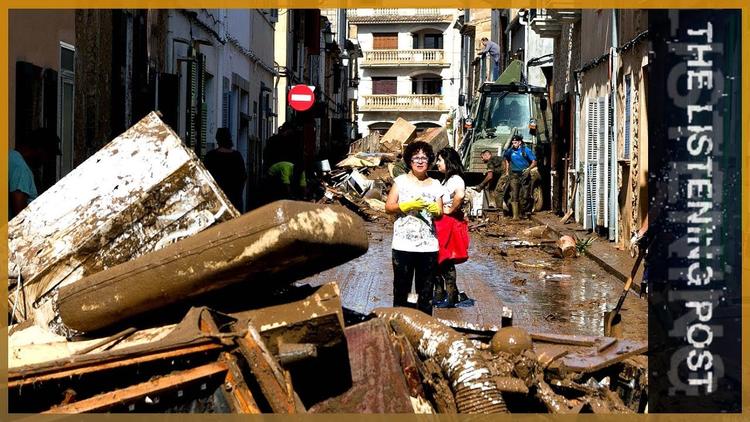 (Informed Comment) – Many of us rely on daily reports, often presented by local TV weatherpersons, to get through our daily routines. How do I dress, do I need to take an umbrella to work, must I come home early to avoid the snowstorm? These professionals have a difficult job. Their predictions are generally correct and quite useful the vast majority of the time, but most of us tend to remember only the mistakes. Nonetheless local weather and the local stations and broadcasters are more trusted than national networks.

As extreme weather events become more common and the tools that portray these events in real time become more sophisticated and graphic weather segments are likely to become more watched and TV meteorologists more influential for good or ill. Let’s hope the local stars rise to the occasion because the national networks remain strangely silent on climate science. A recent study of major networks performance during Dorian reported by Common Dreams indicated: “Even as Hurricane Dorian tore through the Bahamas and crept up the southeastern U.S. seaboard, broadcast news networks were loathe to connect the powerful storm’s strength to the climate crisis in spite of the science linking warmer sea surface temperatures to increased frequency of strong hurricanes.

According to a study by watchdog Media Matters For America, only CBS aired a segment tying climate change to hurricane activity like Dorian’s. NBC and ABC aired no such programs. “ And CBS aired only one short segment.

Weatherpersons and/or their bosses may not wish to admit this, but they already make political choices and their programs are contestable space. One of the obvious ways in which weather broadcasts are political is the ways in which they deal with climate science denialism. In a large national survey of weatherpersons:” Four in ten (40%) weathercasters present an “opposing viewpoint” at least sometimes when reporting climate change information: 10% do so “always or almost always;” 12% do so “most of the time;” 7% do so “about half the time;” and 11% do so “less than half the time.” Only 24% do so “never or rarely”

These results are distressing. Demialism is a cult not a science, and treating it as legitimate dissent within the scientific community is dishonest and dangerous. Even ExxooMobil has known for a generation that human- made climate change is real. Persistent denial presented as science only serves to confuse the public and delay badly needed actions. Weatherpersons need to be connecting their discussions and descriptions of ongoing weather events to the backdrop of a warming climate.

One opportunity to educate by connecting rare events and contemporary climate science is the stunning duration of some of these dangerous weather systems. Remember when we could all breathe a sigh of relief when a tropical system came ashore. We would expect that it would soon dissipate as rain showers, inconvenient but no big deal. These now often linger for days and become epic floods. Changes in the jet stream, modulated in part by warming of the Arctic air masses, plays an important though not fully understood role in these periodic weather events. (Climate scientist Michael Mann discussed this example at more length on a recent Democracy Now program.)In my own sporadic viewing of the Weather Channel coverage of Donian this theme received no attention.

Global warming has clear distributional impacts/ .Jonathan Patz, Public health expert, at the University of Wisconsin points out: “There are so many pathways through which climate impacts our health.’ Those pathways include heat, air pollution, extreme weather, vector-borne diseases, and access to safe water and food. The health risks posed by climate change already disproportionately harm marginalized groups including people with disabilities or infirmities, low-income families and individuals – and climate change is likely to deepen those disparities.”

Many weatherpersons would maintain that they are not political, they just present the weather facts. In this regard I would ask these media figures to consider a rather typical weather segment. During the extreme heat wave this past summer WNBC meteorologist Dave Price called attention to the severity of the heat and then told viewers to “flip on the AC.” For me the casual tone of the recommendation coupled with the use of initials suggest he was dealing with a normal part of life we all know about and can relate to. But focusing on individual solutions, especially ones that may burden the most vulnerable, is a political choice, one that distracts the citizenry from other more egalitarian and more effective choices. Alternatively a weather segment might have dealt with Green roofs and community shelters. Were the latter emphasized and promoted as essential for all New Yorkers their quality would surely be upgraded.

Some meteorologists and their bosses maintain that presenting the dire facts about global warming will turn off many viewers, who will then turn off or hit the remote. That fear cannot be discounted but is less likely when the words are spoken by a trusted member of the community and, more importantly, when constructive alternatives are presented. Global warming is a serious risk but also an opportunity to make changes that could improve the quality of life.

If weatherpersons have a professional and civic responsibility to connect the distant and abstract notion of global warming to events in our daily lives, we citizen viewers also have an obligation. It would be naïve to think that local station managements and owners will encourage or even allow their trained professionals to exercise their best judgments and present stories that highlight connections between weather emergencies and global warming. Corporate and management reticence is not just a matter of the obscene level of fossil fuel ad dollars going to the corporate media. The broader science, in connection with ongoing crises, suggests the limits of our growth and consumer driven society. That message is anathema to the media however essential to our ears. So we best do what they won’t and monitor our local meteorologists and make our voices heard.

Aljazeera English: ”
Why media need to turn up temperature on climate change | The Listening Post”