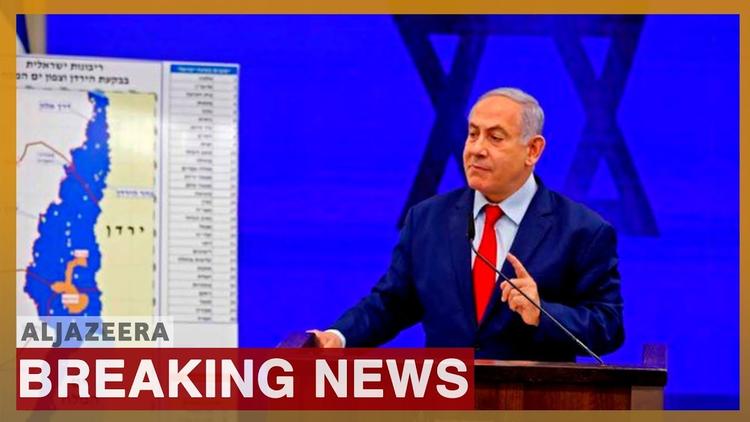 Israeli Prime Minister Benjamin Netanyahu promised to annex parts of the occupied West Bank if re-elected in last month’s General Election, eliciting outrage from world leaders. However, that “promise” to usurp not just the West Bank, but all of Palestine, is century-old news, an ongoing promise being kept, and no international outrage has ever really mattered in any case.

A well-worn chapter of Israel’s creation myth explains its conquests thus: When in November 1947, the United Nations proposed partitioning Palestine into two states (General Assembly Resolution 181), Israel’s founders embraced the offer with gratitude, whereas the Palestinians scoffed at it and attacked the fledgling “Jewish state”.

This is more than bizarre rationalisation for seven decades of imperialism and ethnic cleansing; it is historical invention. The Zionist movement never had any intention of honouring any agreement that “gave” it less than all of Palestine. Mainstream leaders like the “moderate” Chaim Weizmann and iconic David Ben-Gurion feigned acceptance of partition because it handed them a weapon powerful enough to defeat partition: statehood.

When Britain agreed to become Zionism’s benefactor, codified with the ambiguous 1917 Balfour Declaration, its negotiators knew full well that the Zionists planned to usurp and ethnically cleanse Palestine, and that the Declaration’s assurance to the contrary was a lie. As Lord Curzon complained, Zionism’s propagandists “sang a different tune in public” — a tune that the major media continue to hum today.

By 1919, activists like Weizmann were already exasperated at Britain’s failure to establish a Zionist state from the Mediterranean Sea to the River Jordan— as a start — and so pushed for “a comprehensive emigration scheme” of non-Jews to get the ethnic cleansing over and done with. The public lie remained safeguarded; British Colonel Richard Meinertzhagen assured Weizmann that the true plan is “still withheld from the general public”. Nor was the public informed when the USA’s King-Crane Commission went to the region that year and discovered for themselves that “the Zionists looked forward to a practically complete dispossession of the present non-Jewish inhabitants of Palestine.” The Commission Report was buried.

It was in 1937 that the turmoil caused by dispossession first led the British to propose partitioning the land. Ben-Gurion saw partition’s hidden potential: “In the wake of the establishment of the state,” he told the Zionist Executive, “we will abolish partition and expand to the whole of Palestine.” He made the same promise to his son Amos.

When Ben-Gurion, Weizmann and others met in London in 1941 to discuss future plans, the cynical disconnect was chilling. Would “Arabs” have equal rights in the “Jewish state”? Of course, but only after there were none left. Would partition be acceptable? Certainly, if the line were the River Jordan (meaning 100 per cent of Palestine for Israel), expandable into the Hashemite Kingdom of Jordan itself. One attendee challenged the Zionists; the industrialist Robert Waley Cohen accused them of following Nazi ideology.

By 1944, the British knew that opposition to partition had “hardened throughout all shades of Jewish [Zionist] opinion,” and new resolutions among the settlers’ leaders placed “special emphasis on the rejection of partition.” But partition’s failure would become the Palestinians’ problem. The British would go home.

Ben-Gurion described statehood as a “tool”, not an “end”, a distinction “especially relevant to the question of boundaries,” which would instead be determined by “seizing control of the country by force of arms.” Scarcely any pretence was made outside the UN’s walls: Zionist Organisation of America President Abba Silver publicly condemned any mention of Partition and demanded an “aggressive and militant line of action” to take all of Palestine. The Jewish Agency’s militias were busy doing precisely that, frenetically establishing strongholds in areas that the UN was expected to allocate to the Palestinians.

Abba Hillel Silver, speaking at the UN on behalf of the Jewish Agency, arguing for a Zionist state

“The peace of the world,” future Israeli Prime Minister Menachem Begin warmed the UN in the summer of 1947 — after Zionist terrorism had already reached Europe and Britain — will be threatened if “the Hebrew [Biblical] homeland” is not given in full to the Zionists. “Whatever might be signed or pledged” at the United Nations, the Jewish Standard warned, would be annulled by the “power and passion opposed to Partition” of “uncompromising resolve.”

This mass fanaticism to “restore” an ancient kingdom and be its imagined population was the result of what might fairly be described as brainwashing. Already by 1943, US intelligence warned that Zionism was nurturing “a spirit closely akin to Nazism, [to] regiment the community [and] resort to force” to achieve its goals. Similar warnings of Zionism’s fascistic stranglehold over Jews came from individuals in the midst of it, among them J.S. Bentwich, Senior Inspector of Jewish Schools, and Hebrew University president Judah Magnes.

The day before Resolution 181 was passed, the CIA warned again that the Zionists will ignore partition and “wage a strong propaganda campaign in the US and in Europe” for more territory. Then as today, though, Americans were kept uninformed: “Americans,” noted US intelligence figure Kermit Roosevelt in 1948, do not realise “the extent to which partition was refused acceptance as a final settlement by the Zionists in Palestine.”

Ironically, it was because the UN never believed that the Zionists would honour partition’s borders that it “gave” them a disproportionately large land area, hoping this might delay their inevitable aggression. But barely was the ink dry when the mayor of Tel Aviv —the presumed capital of the new state — announced that his city “would never be the Jewish capital”. It would be Jerusalem, a direct breach of the UN Partition resolution, which had designated it as an international zone. The Jewish Agency also said that “a number of national institutions” would be in Jerusalem.

The duplicitous attitude toward their UN “victory” was barely veiled. Whether the “liberal” Haaretz or the Zionist newspaper Haboker, the message was indistinguishable: “The youth of the Yishuv must bury deep in their hearts the fact that the frontiers have not been fixed for all eternity,” as Haboker put it. However long it takes, the rest will be “returned to the fold”.

Israeli statehood assured, CIA warnings grew more ominous: Zionist operatives were now impersonating US military and American Airlines personnel. Former US Senator Guy Gillette was openly working for the terror gang Irgun and pushed for blanket recognition of Israeli sovereignty over any lands that its militias could conquer.

Jerusalem remained Israel’s most urgent concern. Whereas land under “Arab” rule could eventually be usurped, a Jerusalem administered by the UN might not. And so when UN Mediator Count Folke Bernadotte composed a new plan for peace in the autumn of 1948, the terror gang Lehi warned him against a “non-Jewish administration” there. However, Bernadotte kept Resolution 181’s international zone, and the next day Lehi, under future Israeli Prime Minister Yitzhak Shamir, assassinated him.

By the end of 1948 Israel had stolen more than half of the land it had “agreed” to leave for the Palestinians, and refused to budge. This was the origin of the misnomer “1967 borders”; in truth they are the ceasefire line. Partition was a charade, and Palestinian negotiators were right to dismiss it, but their honesty was, from the Machiavellian standpoint, a tactical blunder which the Zionists were counting on. In short, Israel has never had any intention of honouring either the 1947 Partition Plan or the 1967 borders. So-called Greater Israel across all of historic Palestine and beyond has always been Zionism’s objective.

Thomas Suárez’s book State of Terror was described by Ilan Pappé as “the first comprehensive and structured analysis of the violence and terror employed by the Zionist movement and later the state of Israel against the people of Palestine.” A Juilliard-trained violinist who has performed around the world, he is a former faculty member of Palestine’s National Conservatory of Music.