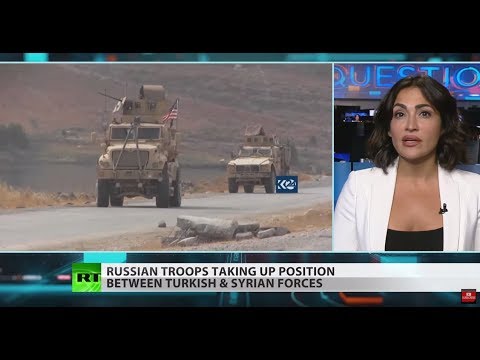 Ann Arbor (Informed Comment) – The Syrian Arab Army (SAA) took control of the city of Manbij on Tuesday, with Russian gendarmes taking up patrols of the city as US special operations forces abandoned two military bases in the region, which were also taken over by Russians.

The SAA and the Russians appear to have beaten Turkey to the punch, since as the LA Times’s Nabih Bulos and Umar Farooq point out, Turkish president Tayyip Erdogan has long wanted to take the city to curb the Kurds, and had been making a thrust into their area.

Russian troops are also patrolling the contact areas where Turkish and Syrian Arab Army forces are facing one another.

A few days ago, Russian president Vladimir Putin demanded that all foreign military forces get out of Syria, in a message aimed at Turkey, with which Moscow is not happy over this incursion. The Russians deny that they ever greenlighted it.

The Turkish army invaded after Trump told Erdogan it would be OK over the telephone.

Manbij was a key Western outpost for the Kurdish YPG in its earlier bid to establish a mini-state in northeastern Syria. That dream collapsed when the Kurds invited Damascus and Russia to intervene to save them from the Turkish army invasion of their territory.

Manbij had fallen to Syrian rebels defying the Baathist regime in 2012, but gradually fell into the hands of the most militant among them, the so-called Islamic State group or ISIL.

In summer of 2016, Informed Comment was closely following the attempt by the Syrian Democratic Forces (SDF) to oust ISIL from the northern Syrian city of Manbij. It was hard fighting over several months, both by the Kurdish People’s Protection Units (YPG) and the smaller number of Sunni Arab fighters who were put in the vanguard for PR purposes. Manbij is a largely Arab city, and there were concerns about a perception of an alien invasion.

US troops were embedded with the SDF and US pilots flew dozens of sorties in support of the effort. The US tried to enlist the help of Turkey, but Turkish president Tayyip Erdogan refused to cooperate on the grounds that Kurdish fighters were involved in the effort. Manbij was on a major smuggling route from Turkey whereby ISIL brought in key materiel. So Erdogan’s refusal to help here was extremely annoying.

And then in late summer, Manbij fell, much to the joy of local residents who had been regimented by the cult of terror, ISIL.

It was a joint US-Syrian Democratic Forces victory and a milestone in the gradual defeat of ISIL, since it closed off a major smuggling route for them.

Russian personnel took over the abandoned US bases, symbolically announcing the ending of American presence in Syria.