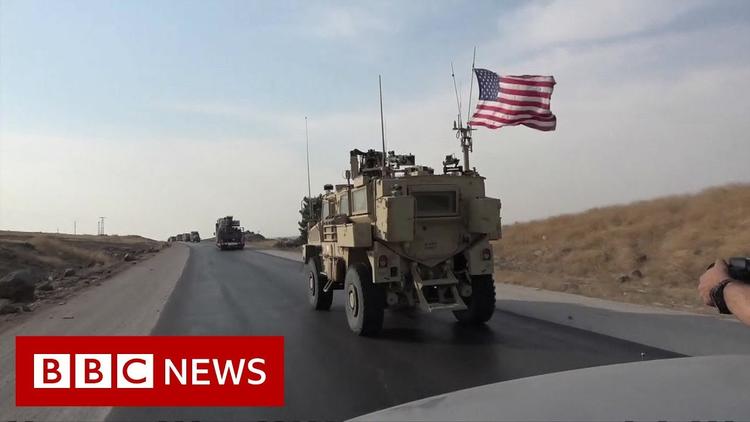 (Foreign Policy in Focus ) – Trump’s not bringing the troops home. He’s been haphazardly deploying more troops, drones, and dollars abroad, while waging a shadow foreign policy for his own benefit.

Donald Trump loves to talk about ending the endless U.S. wars that he inherited as president. He tweets about it. He endlessly criticizes his predecessors for their martial mistakes.

But like the old saw about the weather, Trump talks a whole lot about endless wars but doesn’t do anything about them.

Just this month, he went against the advice of pretty much everyone to pull 1,000 U.S. troops out of northern Syria where they were protecting a largely autonomous Kurdish region. The result has been an immediate flare-up in the Syrian conflict as Turkey sent troops over the border to take advantage of the U.S. withdrawal.

Then Trump turned around and sent an additional 2,000 troops to Saudi Arabia to help them defend against Iran or the Houthis or perhaps just internal critics of the regime.

In fact, the Trump administration has deployed 14,000 additional U.S. troops to the Middle East since the spring. Compare that with the 1,000 troops that Trump is withdrawing from northern Syria. The president seems more focused on starting fires than putting them out.

Last month, Trump promised a grand deal with the Taliban that would allow the withdrawal of U.S. soldiers from Afghanistan. But that didn’t happen.

And what about the Kushner plan that was supposed to end the endless conflict between Israel and Palestine? Dead on arrival.

Counter-insurgency campaigns in Africa? Trump has ordered a 10 percent cut in forces on the continent by 2022, but the total forces under the Africa Command actually went up by more than double that amount from 2017 to 2018 (6,000 to 7,500).

Containment of China? The Pentagon, under Trump, has made China its “number one priority,” and much of the increase in military spending in the Trump administration has gone to preparing for war with Beijing.

Meanwhile, on the home front, Trump has declared war on Congress, on the mainstream media, on anyone who disagrees with him. A recent video shows Trump mowing down all of his critics in an altered outtake from the movie, Kingsman. As a meme, it’s disgusting. As a metaphor, it’s chillingly accurate.

Let’s face it: Trump is not against endless war. He is the embodiment of endless war. It’s the essence of his operating system. He went into politics because he understood that it’s endless war by other means (and he’s always been too squeamish to fight in endless wars by ordinary means).

Once and for all, let’s bury the myth of Trump the dealmaker. He’s about as transactional as a heavyweight boxer. Remember: he was the host not of Let’s Make a Deal but of The Apprentice, in which he presided over a war of all against all with a single winner and lots of losers. He has simply brought that spirit of ungenerosity into the White House.

The consequences have been devastating all around.

The Mess in Syria

Somehow Trump figured out the one geopolitical move he could make that could pave the way for a Turkish invasion of Syria, force a desperate alliance between beleaguered Kurds and the brutal regime of Bashar al-Assad, improve Russia’s standing in the region, and revive the fortunes of the Islamic State.

He seized on this strategy of withdrawing 1,000 troops from northern Syria probably because everyone warned him not to do it. Trump loves to defy expert advice. He’s convinced that he knows better. It’s unclear whence he derives this confidence since he has made disastrous decisions his entire life that have produced bankruptcies, unbuilt buildings all over the world, and a near total refusal of banks to provide him with loans.

The latest fiasco started with a phone call with Turkish President Recep Tayyip Erdogan on October 6 in which Trump effectively endorsed the Turkish cross-border operation in Syria.

David Sanger, in The New York Times, explains that Trump’s “error, some aides concede in off-the-record conversations, was entering the Oct. 6 call underprepared, and then failing to spell out for Mr. Erdogan the potential consequences — from economic sanctions to a contraction of Turkey’s alliance with the United States and its standing in NATO.”

This was enough of a green light for the Turkish leader. Erdogan has been dreaming of invasion for some time in order to neutralize what he believes are a bunch of terrorists aiding Kurdish separatists in southeastern Turkey. He’d also like to relocate many of the Syrian refugees in Turkey to a new Turkish-controlled area in northern Syria.

Until this month, however, Erdogan had been satisfied with a buffer zone. In a sense, U.S. troops were serving as peacekeepers in the region. There were not enough to launch significant military operations but just enough to stand between Turkey and the Kurds on one side and the Syrian government and the Kurds on the other. But no more.

The immediate victims of Trump’s latest decision are the Kurds, the ally that Trump relied on so heavily in his campaign against the Islamic State. The hope of Syrian Kurds for maintaining a peaceful and semi-autonomous state is now gone. The Kurds immediately signed a deal with Damascus that has brought Syrian government forces into the one significant part of the country that remained in opposition hands. When Trump’s callous move forced them to choose, Kurds opted for the devil they knew over the devil across the border.

Turkey’s intervention has displaced tens of thousands of people from their homes. Kurdish refugees are flowing into Iraqi Kurdistan, and humanitarian organizations like Mercy Corps are pulling out their staff from northern Syria. Atrocities against civilians have taken place, including the execution of Kurdish politician Hevrin Khalaf. Turkey is also moving against domestic critics of the military operation, which also happen to be mostly Kurds. Erdogan’s move is motivated in good part by domestic considerations — his desire to silence his critics and generate a spike in nationalist sentiment.

Russia, meanwhile, has moved swiftly to take the place of the United States. Russian troops have flowed into northern Syria to serve as a buffer between Turkey and the government in Damascus. Perhaps it’s better for the Russians to play this role, particularly in the Trump era. But given Moscow’s support for the ruthless Assad, its willingness to sell anybody pretty much any weapon, and its general indifference to human rights, I’m not enthusiastic about an expanded Russian role in Middle East affairs. The United States was no great shakes, but Russia is worse.

Then there’s the Islamic State, which has not disappeared, contrary to Trump’s fanciful assertions. According to The New York Times:

Over the past several months, ISIS has made inroads into the sprawling Al Hol tent camp in northeast Syria, and there is no ready plan to deal with the 70,000 people there, including thousands of family members of ISIS fighters.

In the chaos of the Turkish intervention, at least 750 Islamic State adherents escaped from a displacement camp in the Kurdish-held region. Trump has speculated without any proof that the Kurds deliberately released the prisoners in order to draw the United States back into military engagement. Nice try, Donald: the Kurds are no longer counting on the United States for anything.

But the worst part is: it turns out that Trump didn’t end the war with the Islamic State after all.

The War at Home

The president has been conducting a two-front foreign policy war ever since he took office.

Overseas, he’s been involved in numerous conflicts with both allies and adversaries. But at home, he’s also been at war: with his own policymaking apparatus. He has chewed through foreign policy advisors of all types: Jim Mattis, John Bolton, Rex Tillerson, HR McMaster. As he retreats further into the mancave of his twitterverse, Trump has fallen back on the advice of someone with an even more paranoid and incoherent worldview than his own.

It turns out that there’s an advisor even worse than Trump’s own gut: Rudy Giuliani.

The impeachment hearings are every day revealing the real deep state — the shadow foreign policy orchestrated by Trump and Giuliani. Fiona Hill, who was responsible for Russia and Europe policy at the National Security Council, testified that Giuliani worked to get Marie Yovanovitch, the former ambassador to Ukraine, removed from her post. He was also trying to dig up dirt on Joe Biden and his son Hunter Biden. He was even trying to prove that Ukraine helped the Democratic Party in the 2016 elections.

According to The Washington Post, Giuliani “said he believed Hill was out of the loop compared to Sondland and others involved with Ukraine. ‘She just didn’t know,’ he said. He added that he had never talked to her about Ukraine policy.”

Wake up and smell the facts, Rudy: that’s the definition of a shadow foreign policy. The person who knew the most about Russia and Ukraine was out of the loop? And you, Rudy Giuliani, whose knowledge of Ukraine can be boiled down to a handful of ludicrous conspiracy theories, presume to displace Marie Yovanovitch, who speaks the languages of the region, was deputy chief of mission at the U.S. embassy in Kiev from 2001 to 2004, and was determined to help root out corruption in Ukraine?

And your chief ally in this endeavor, other than a president who has even less understanding of geopolitics than you do, is Gordon Sondland, the U.S. ambassador to the European Union? Sondland has only one qualification for his job: absolute fealty to Donald Trump. The guy’s nothing more than a glorified hotelier who has spent most of his time in Brussels overseeing an expensive renovation of the ambassador’s residence.

Giuliani has emerged as this generation’s Oliver North, the architect of the Iran-Contra affair during the Reagan years. Like North, Giuliani has been running a covert operation under the noses of the foreign policy professionals. Rudy’s goal was much narrower and grubbier than North’s: the reelection of the president. Giuliani, in other words, was basically a CREEP (Committee to Reelect the President) unto himself.

All of this is bad news for Trump on the impeachment front. But it’s also bad news for Giuliani, particularly if it turns out that he didn’t disclose his lobbying ties, which would expose him to criminal charges. After all, he actively lobbied on Turkey’s behalf to persuade the Trump administration to extradite the cleric Fethullah Gulen from Pennsylvania back to Turkey. Mike Flynn, Trump’s erstwhile former national security advisor, went down for almost the identical offense.

Meanwhile, Rudy was pulling down half a million dollars for his consulting work with the aptly named Fraud Guarantee (or is that Guaranteed Fraud?), which just happened to be owned by one of the Ukrainians recently arrested for campaign finance violations.

It’s not looking good for the president and all the president’s men. Trump continues to try to fight his way out of his predicament. So far, he still has the Republican Party in his corner. But that might not last long.

The impeachment will not be an endless war. It will be nasty and brutish, but it will be relatively short. Trump the putative dealmaker might make one last appearance in an effort to stay out of jail. But the more fitting scenario would be if the president goes down in flames as the most prominent casualty of his own endless war against the U.S. people.