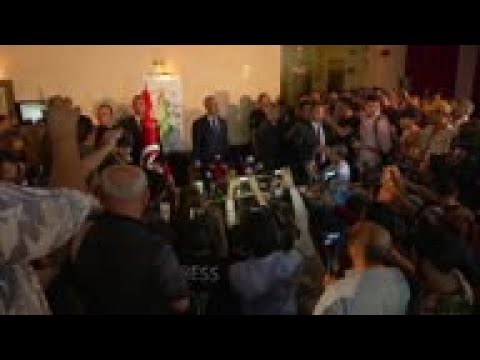 The overwhelming election victory of Tunisia’s new President, Kais Saied, and the statements he made in its aftermath send a very clear message: the counter-revolution in Tunisia has failed; it has been defeated; it has ended. Tunisians have always embraced the saying, “If people fight for life, destiny will listen to them” and destiny has indeed answered their calls; they have broken free from the chains of tyranny, oppression and domination.

The statements made by the academic and university professor following his victory were about Palestine and normalisation with Israel. They are proof that the man does not intend to ride the wave and get drawn into Israel’s circle, which is what we are witnessing with others in the Arab world, from east to west. Kais Saied is bringing Tunisia back to what it used to be when it was the only Arab home for Palestinian resistance and the headquarters of the Palestine Liberation Organisation.

A professor known for his devotion to Arabic in a country where the majority of the population speaks French has won the election and become president. This has reaffirmed that Tunisia has changed and is changing, and that counter-revolutions which want to thwart the revolutions of freedom have not succeeded, at least in this North African country. The Arabs will soon begin to feel the effects of the change that began in Tunisia. In the next Arab summit, this erudite professor-president will sit with a number of his counterparts who are illiterate and know nothing other than oppressing their people and paying money to their enemies. At that point, Arab citizens across the region will notice the irony live on air.

The more important message that we Arabs have received from Tunisia over the past few days is that “there is something in the Arab world that is worth living”. It goes without saying that some of those illiterate Arab rulers will soon begin to conspire against Saied, as his presence exposes them for what they are, and might prompt others to look for rulers who can read, write and think, and love their people instead of oppressing them.

There are other very important messages emanating from Tunisia across the Arab world. The surprising result of the parliamentary elections means that more than a quarter of the seats ended up in the hands of Ennahda, the Tunisian arm of the Muslim Brotherhood. This is the same movement that dozens of local (and regional) media outlets have been demonising over the past few years, accusing it of being behind every problem imaginable, including the assassinations that followed the “Jasmine Revolution”, all of which was clearly intended to divide Tunisia. It does not matter if Ennahda forms the government or not. What’s important is that systematic political propaganda has failed, which means that the people of Tunisia have a high level of political awareness, understanding and intelligence.

Another message is that the movement of change, although stalled for some time, is moving towards realising its goals. Those regimes which still brutalise and repress their people get the feeling that their time is coming to an end, because change is inevitable; the masses may slow down but they do not die.

The outcome of the presidential and legislative elections in Tunisia sent a very important message of hope to the Arab world, which may be more important than the results. The Tunisians are showing that change is possible and that democracy is good for Arabs, just as it is for others; they are no less qualified to benefit from democracy, the transfer of power and a high level of urbanisation.