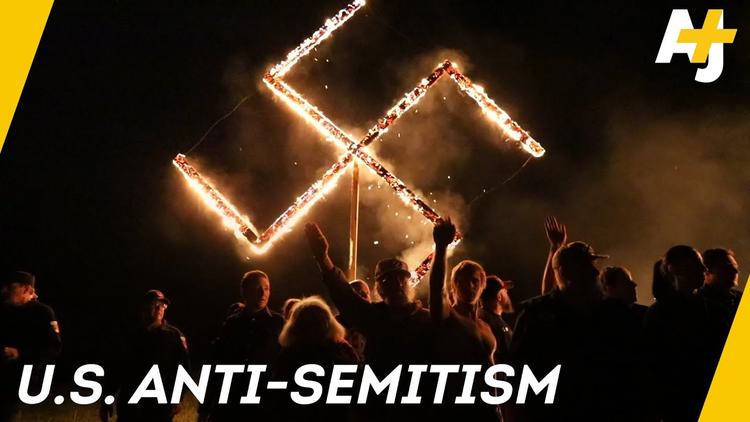 Americans recently observed the first anniversary of the shooting at the Tree of Life synagogue in Pittsburgh, in which 11 were killed and six wounded.

A year earlier, white supremacist marchers in Charlottesville, Virginia, chanted the slogan, “Jews shall not replace us.”

Synagogues around the country have also been defaced with anti-Semitic graffiti. Last month, during the Jewish High Holy Days, a swastika and the word “Trump” were spray-painted on the steps of the law school at Yale University, where I teach.

This is not the first time that hate speech and violence against Jews and other racial and religious minorities have flared in the U.S. Recent events mirror the situation in the early 20th century, when white Christian nationalists in the United States demonized immigrants and treated Jews as a danger to the nation.

Then, as now, people on all sides of these disputes invoked the American ideal of religious freedom. As I show in my book “Religious Freedom,” while some Americans used this constitutional protection to justify a politics of exclusion, others drew a widening circle of inclusion.

The politics of exclusion

At the turn of the 20th century, white Christian nationalists saw Jews and other religious outsiders as threats to the nation and used religious freedom as a weapon against them.

In 1892, writing for an anti-Semitic publication “Sound the Tocsin of Alarm,” Orville Jones, a lawyer and Methodist layman from Missouri, warned that the Jew had a “persistent determination… to practice fraud, extortion, and especially usury.”

He went on to add that “the Jew” was now recruiting others to join “his crime against civilization.”

Jones was on the extreme end, to be sure, but Jews at the time experienced serious discrimination on both racial and religious grounds. Jewish merchants were brutally assaulted in Mississippi in the 1890s and violent attacks occurred across the country in subsequent decades. Many universities limited Jewish enrollment, while some institutions banned Jews altogether.

Congress implemented strict immigration quotas in the 1920s, in an effort to keep Jews and other racially defined minorities out of the country. Jewish immigrants, mostly from Eastern Europe, were treated as a distinct race and increasingly excluded from the privileges of whiteness in American life.

This might seem to be a blatant violation of religious freedom. But white Christian nationalists like Orville Jones used this very ideal to justify exclusionary and sometimes violent policies against Jews and other minority groups. They claimed that Jews posed a direct threat to American freedom.

“Again the Sons of the Republic are called upon,” he wrote, “to fight the initial battle of the world’s hope for civil and religious liberty.” This struggle had to be waged against what he called the “sneaking cowardly cruel indirect power” of the Jew.

He and others like him believed they were fighting for the religious freedom of America’s white Christian majority.

The call for inclusion

American Jews fought back, using this same ideal of religious freedom to counter discrimination and violence.

Most Americans in the early 20th century, even those who were inclined to support Jewish rights, viewed Jews as a distinct race. As I show in my book, the Federal Council of Churches tackled the problem of anti-Semitism in the early 1920s with the expressed goal of ending “racial antipathies” and creating a new “spirit of brotherhood” in American life.

Americans at this time did not think of race simply as a matter of skin color, and even Jews sometimes spoke of themselves as a separate race. They celebrated the historical achievements of the Hebrew race or nation.

At the same time, American Jews had for generations insisted that the American promise of religious freedom must also apply to them.

Oscar Straus, for example, who served as treasury secretary under President Theodore Roosevelt, was an amateur historian who located the intellectual foundations of religious freedom in the Hebrew Bible. He even named his son Roger Williams Straus after Rhode Island’s colonial champion of this freedom.

The younger Straus, a successful businessman in New York, was also a strong proponent of religious freedom. He took on a leading role in the National Conference of Christians and Jews , which fought Nazi anti-Semitism in the 1930s through public events that featured Protestants, Catholics and Jews speaking on topics of common interest.

Together they argued for religious freedom and toleration as the best defense against bigotry and violence. They also identified Judaism as a religion to be respected and given the freedoms guaranteed by the U.S. Constitution. In so doing, they were fighting the anti-Semitic portrayal of Jews as an inferior race who were inherently disloyal to the United States and its ideals.

As Nazi armies moved across Europe, Straus’ book “Religious Liberty and Democracy” issued a desperate plea for unity against the anti-religious totalitarianism of the world.

One effect of all this was to redefine Jewish communal identity in religious terms. For American Jews, and eventually for most other Americans as well, being Jewish was increasingly a matter of religion more than it was about racial or national difference.

Because Jews were no longer considered a separate race, those who appeared white could now gain the privileges of whiteness in American life.

The ambivalent promise of religious freedom

After World War II Judaism was accepted as an integral part of a new American religious triad – Protestant, Catholic and Jew. In his 1955 book, sociologist Will Herberg argued that these three faiths now shaped what it meant to be religious in America and defined who could be considered a real American.

But as I argue in my book, this tri-faith celebration of American religious freedom could also obscure the ongoing problem of racism in American life.

One African American commentator wrote in 1933 that while the “nice liberals” of the National Conference of Christians and Jews may have been tackling the bigotries of religion, their discussion groups never included a “Negro.” And they were strangely silent on “the worst intolerance of all: color prejudice.”

Atheists and other religious minorities – such as Muslims, Buddhists, Hindus and practitioners of Indigenous traditions – also remained on the margins of this culturally reconfigured “American.”

Religious freedom is a powerful tool that can expand the bounds of who and what counts as religious. At the same time, my research has taught me that appeals for religious freedom can be exclusionary, often in unintended ways. We cannot allow white Christian nationalists to define its limits.

The Origins Of Anti-Semitism In America | AJ+