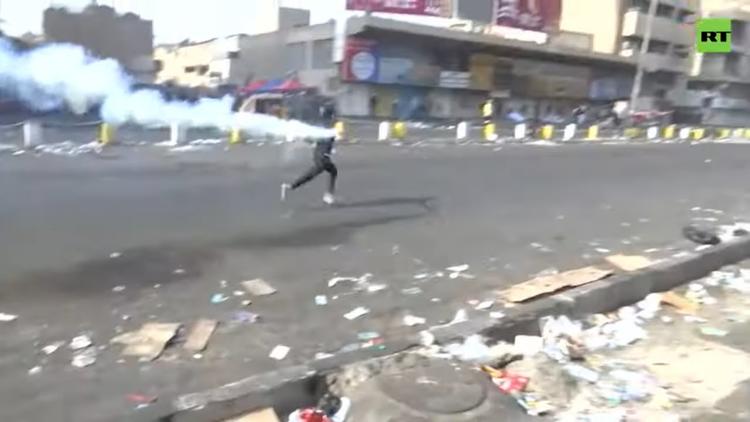 “Medics have become another victim of the state’s excessive force,” said Sarah Leah Whitson, Middle East director at Human Rights Watch. “These attacks show an utter disregard for the overriding need to ensure medical workers can do their essential job.”

A Baghdad doctor told Human Rights Watch that he has seen security forces in Tahrir Square and on three Baghdad bridges fire teargas cartridges at ambulances at least five times since October 25. On October 25, they fired live ammunition that struck an ambulance, he said.

A medic working in Tahrir Square said that on October 25, at around 6:15 p.m., he was in the back of an ambulance with the doors open facing Jumhuriya Bridge, where security forces were firing teargas cartridges in the direction of the ambulance. The ambulance he was in was parked away from protesters when a teargas cartridge struck him: “Something hit my chest, it was heavy, but I could not see what it was because the ambulance filled up with smoke. Everyone in the ambulance started having a hard time breathing.”

A medic in Baghdad said that on October 31, an officer on the bridge fired two teargas cartridges directly at him as he was kneeling to treat a wounded protester on the banks of the Tigris River, below Jumhuriya Bridge. He was able to shield himself, he said.

Another medic in Baghdad said he was part of a team of 20 medics working in a makeshift medical tent on Ahrar Bridge, where some protesters had been demonstrating since early November. He said that on November 6 at around 5 p.m., protesters started to climb over barriers toward security forces. He then saw hundreds of Federal Police and Anti-Riot Police, which he recognized from the marked vehicles behind them, and other forces wearing black uniforms and masks, open fire.

Some fired live bullets at their tent. He and the other medics fled, with security forces shooting at them as they ran, he said. The Federal Police chased them, detaining two medics who he said remain in detention, but he did not know if they have been charged with a crime.

A doctor who was at the tent on Ahrar Bridge at that time said that medic Abbas Ali, who was also there, had told him that Federal Police had given the team permission to provide first aid to injured protesters on the bridge. The Federal Police and the Anti-Riot Police subsequently opened fire without warning, he said, wounding several protesters. He said Ali went out to treat one of those injured.

“While Abbas was treating him, I saw him get shot in the hand,” the other doctor said. “Abbas raised his hand up, trying to signal to his medical coat. Then a shot hit him in the neck. Protesters put Abbas into a tuk-tuk and then into an ambulance, and drove him to Al Kindi Hospital. I followed him there in my car, but by the time I arrived, staff there told me he had died.”

Human Rights Watch reviewed footage of Ali on the ground at the bridge with a bullet wound to the neck.

In another attack, a Health Ministry worker volunteering with medics said that at around 1:30 a.m. on November 9, as clashes between protesters throwing Molotov cocktails and Anti-Riot Police escalated on Sinak Bridge, about 40 police destroyed their medical tent, equipment and medication, and then torched the tent. He said they also fired a teargas cartridge at the ambulance he was in.

Human Rights Watch reviewed footage of security forces lighting the tent on fire. On November 11, the Health Ministry worker said he went back to the area with three other medics to pick up medication they had in storage when security forces opened fire on them without warning. He said there were no protesters around them at the time of the attack.

Two medics outside of Baghdad said they had come under threat for providing medical assistance to protesters. One, a doctor in Karbala who has been donating food and money to the protesters, and providing medical treatment on the streets, said that a government representative on November 5 told him: “If you don’t stop your activities, the next warning will be a bullet to your head.”

The second, a Basra medic in charge of a team of eight other medics and four ambulances in Bahrya Square, said that on November 6 his team had treated at least 25 protesters with gunshot wounds when, at around 10:15 p.m., all the security forces in the square suddenly retreated. The approximately 1,000 remaining protesters started playing music, dancing, and lighting fireworks. But at 11 p.m., the medic said, a group of about 40 Interior Ministry forces from the Basra command operation appeared from inside a Provincial Council office and opened fire on the crowds.

“Four of them came up to the ambulance I was in, and two started beating me with wood sticks, and told me and my team had to leave the square immediately,” the medic said. They asked why we were treating the protesters and I explained we were neutral, and were there to treat everyone, including security forces. They swore at us and made us leave but one of our ambulances was stalled and because we didn’t move it, they smashed the windows and side mirrors.”

He said that the security forces then opened fire on a makeshift medical tent run by Health Ministry volunteers, sending them running: “One medic in the tent at that time got shot in the back, I saw him bleeding. I begged them to let me take him and a wounded protester I saw lying on the ground in his own blood to the hospital, but they didn’t. I waited there until 2 a.m. begging them to let me get help.” He said he finally left when an officer threatened to arrest him and did not know what happened to the injured men.

A medic in Nasriya told Human Rights Watch that on November 10, about 600 protesters gathered near the gate of Haboby Teaching Hospital at noon. Clashes escalated between Anti-Riot Police, who were throwing stones and firing teargas cartridges at the crowd, and protesters throwing rocks back at the police.

“We were 15 medics standing a distance away from the protesters,” he said. “When one teargas cartridge landed next to us, one medic put a blanket over the cartridge to stop the gas.” He said that police started pushing the protesters in the direction of the medics, who went into the hospital. About 100 policemen followed the medics inside. A commander fired three bullets into the ceiling above the medics and accused them of supporting the protesters. During the clashes, police fired three teargas cartridges that landed inside the hospital, he said, damaging the windows and causing breathing problems for two female patients.

The United Nations Basic Principles on the Use of Force and Firearms by Law Enforcement Officials forbids government security forces from using excessive force against protesters and calls on them to ensure provision of medical assistance at the earliest possible moment to anyone injured by law enforcement officials.

The Iraqi government should ensure an independent investigation into every death at the hands of security forces, with the help of international experts if necessary, Human Rights Watch said. The authorities should also investigate allegations of security forces interfering with medical services and ensure that anyone wounded has access to immediate and unimpeded care. Security force members responsible for the use of unnecessary or excessive lethal force, including commanders, should be disciplined or prosecuted as appropriate.

Countries that provide military and law enforcement training and support to Iraq should end assistance to units involved in serious human rights violations unless the authorities hold abusers accountable and curtail the abuses.

“Medical workers should not have reason to fear for their lives as they engage in heroic work in already dangerous environments,” Whitson said.