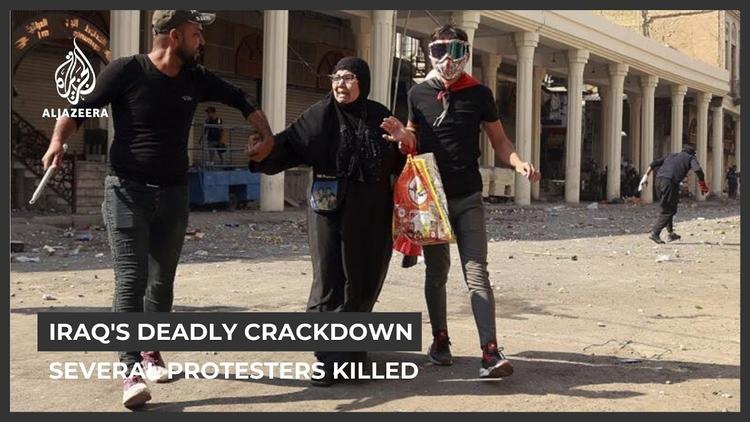 Ann Arbor (Informed Comment) – Some 17 katyusha rockets targeted a military base south of Mosul Saturday morning where US troops are based. There are no reports of casualties. In that strong Sunni area of Iraq, the attack was unlikely to be the work of Iran-backed Shiite militias, but ISIL remnants are more likely. This could be revenge for the US attack on Abu Bakr al-Baghdadi in Idlib, Syria, which led to his death when he detonated a suicide bomb vest.

The turmoil in Iraq, which has seen the largest protests in modern history in the past month, may also have detracted from the readiness of its security personnel. Huge rallies have been held for the past month, demanding services and an end to corruption, as well as an end to foreign (US and Iranian) interference in the country.

In fact, Iraq has become so unstable that you have to wonder if the 5,000 US troops there are really safe. Force protection is viewed as the responsibility of the host government, but Iraq barely has a functioning government.

On Friday in Basra, At least ten protesters were killed and dozens wounded when they attempted to invade the provincial council headquarters. The Iraqi government, under pressure after over 200 protesters have been killed, had promised to stop troops and police from deploying live fire on demonstrators, but the Basra forces appear to have disregarded these orders.

Apart from the new deaths in Basra, some 23 demonstrators had been killed and 1,000 wounded in several southern provinces during the past week, according to Al Jazeera. They include Karbala, Dhi Qar and Basra.

In Rifa’i in the north of Dhi Qar, the local municipal government subjected protesters to mass arrests.

In Baghdad, enormous crowds in the thousands filled Tahrir Square downtown, keeping pressure on the government for reform. Some two hundred activists for the third day running attempted to reach Martyrs Bridge, but were again halted by Iraqi security forces, who drove them off with teargas and sound grenades, along with live fire that left 6 dead according to Al Jazeera. The Doha-based channel was told by Iraqi officials that orders were given to have officers who ordered the use of live fire arrested.

Grand Ayatollah Ali Sistani, the spiritual leader of Iraqi Shiites, called on the government to meet the demands of the protesters. He said the government had been given a unique opportunity to carry out urgent reforms to address deadly corruption and a sectarian spoils system in the government. He also warned activists against infiltrators who might attempt to derail the peaceful character of the protests.

Of the $500 billion Iraq has received for its oil exports since 2006, it is estimated that none of that money is retained in government coffers, suggesting the largest embezzling ring, in the form of the Iraqi cabinet, in modern history.