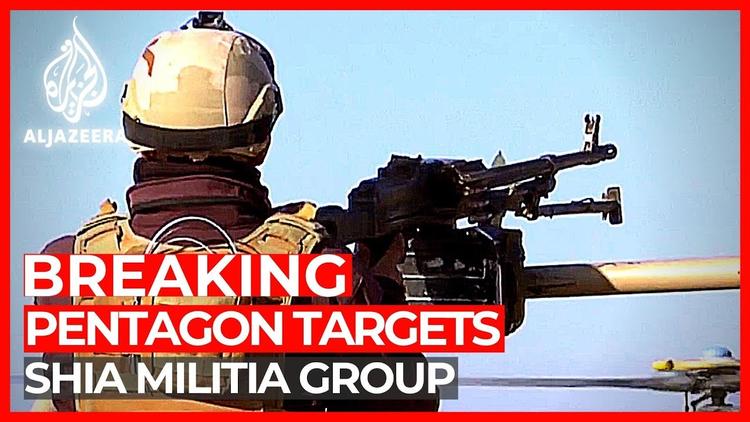 Ann Arbor (Informed Comment) – The Iraqi newspaper Shafaq reports on the reaction of the Kata’ib Hizbullah, an Iraqi Shiite militia, to the US airstrikes targeting its bases on Sunday. The US maintains that Kata’ib Hizbullah (not to be confused with the Lebanese militia) is responsible for an unprecedented number of mortar and rocket attacks on sites where US troops are stationed in the past few weeks.

The Iraqi government issued a sharp complaint that the attacks violated Iraqi sovereignty and constituted a “dangerous escalation” (they appear to have been launched unilaterally and without consultations with Baghdad.) The Kata’ib Hizbullah is also part of a political grouping that has a substantial presence in parliament and backs the current government.

Iraq Army spokesman `Abd al-Karim Khalaf said that Prime Minister Adil Abdulmahdi had conveyed to US Secretary of Defense Mark Esper his categorical rejection of the US strikes.

Although US Secretary of Defense Mark Esper and Secretary of State Mike Pompeo spoke of the group being Iran-backed, Iranian president Hassan Rouhani disavowed any Iranian responsibility for the actions of Shiite militias in Iraq. Iran’s stated position is that arms must be in the hands of formal Iraqi security forces and that the militias must not challenge Iraqi government authority but should rather be integrated into state security forces. The Iranian Revolutionary Guards Corps has however, trained and sponsored the militias.

Spokesman Jawad al-Rubaiawi said that the group’s headquarters, the 45th Brigade of the Popular Mobilization Units, in al-Anbar Province had been subjected to an American attack by fighter jet. He clarified that the strikes took place in the region of al-Mazra`a and al-Sharit on the border with Syria well inside Iraqi territory. He said that the strikes produced dozens of martyrs and wounded and that rescue operations are ongoing. He said that volunteer civilian medics and firefighters in the district of al-Qa’im were helping respond.

A communique issued by the group said that initial reports suggested that 45 fighters had been killed.

The US also hit two bases of the organization in Syria, attempting to destroy munitions stockpiles. Kata’ib Hizbullah in Syria has been fighting fundamentalist Sunni militias, some of them with ties to al-Qaeda, and also fought ISIL. It is a little hard to understand the US strikes on them in Syria unless the Trump administration is now backing the Sunni fundamentalists.

The group’s leader, who is also the deputy head of the Popular Mobilization Units Council, Abu Mahdi al-Muhandis , pledged that the group would have its revenge on the United States by striking at US troops based in Iraq.

The US has about 5,000 troops in Iraq, who are helping the Iraqi Army in mop-up operations against the hyper-Sunni ISIL terrorist group. Ironically, that makes the US troops and Kata’ib Hizbullah de facto allies of convenience.

Kata’ib Hizbullah is part of an electoral coalition, “Fath,” which groups the Shiite militias as political parties, and which won 45 seats in the elections of May 2018. Fath is part of the ruling coalition that backed outgoing prime minister Adil Abdulmahdi, and will be crucial in the confirmation of any new prime minister. (Abdulmahdi was forced to resign by weeks of popular crowd protests against corruption).

On Sunday, 4 katyusha rockets were fired at Taji Base near Baghdad where US troops are stationed, but there were no casualties.

The Popular Mobilization Units or Shiite militias have a mixed reputation in Iraq. Some view them as heroes who helped defeat a menacing ISIL. Indeed, their bases at al-Qa’im are used to prevent ISIL operatives from moving easily between Iraq and Syria. Other Iraqis, including Shiites, see them as an overbearing part of the corrupt Shiite Iraqi Establishment in Baghdad, and accuse them of shooting demonstrators in concert with formal Iraqi security forces.

My guess is that the Iraqi parliament will at some point in the coming year kick US troops out of Iraq as a result of these strikes on a component of that parliament.

As for who Kata’ib Hizbullah are, the Iran Primer of the US Institute for Peace explains:

“Kataib Hezbollah, or Brigades of the Party of God, the 45th brigade of the PMF, dates back to 2004, when the Shiite militias began attacks on the U.S.-led coalition . . . In 2009, the U.S. State Department designated it a terrorist organization . . .

After the 2011 U.S. withdrawal from Iraq, Kataib Hezbollah dispatched fighters to defend the Assad regime in Syria at the behest of [
Ghassem] Soleimani. Kataib Hezbollah joined the PMF and fought the Sunni extremists after ISIS swept through northern Iraq in 2014. Its forces continued to fight in both countries. “I will not shy away from mentioning the support of the Islamic Republic of Iran in terms of weapons, advising, and planning,” its leader, Muhandis said in March 2018. He also publicly thanked Lebanese Hezbollah for training its fighters in Iran . . . One of Kataib Hezbollah’s main objectives is to stem the influence of Baathists, the United States, and Sunni groups, such as ISIS. It rejected the return of U.S. forces to advise the Iraqi Army on confronting ISIS.”

Al Jazeera English: “US carries out air raids in Iraq, Syria against Hezbollah”