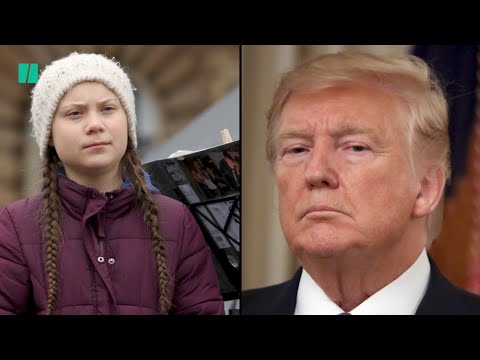 Ann Arbor (Informed Comment) – Trump bullied environmentalist Greta Thunberg over her Time magazine cover on Thursday. In a tweet he called the award “ridiculous” and accused her of having “anger management issues,” advising her to “chill.” 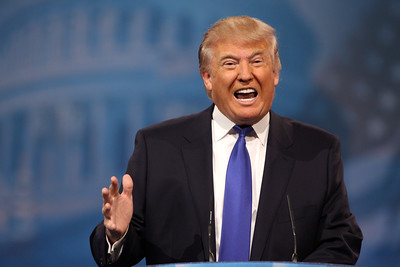 Embed from Getty Images
MADRID, SPAIN – DECEMBER 09: Greta Thunberg participates in a press conference with other young climate activists during the Climate Summit COP25 in Ifema on December 09, 2019 in Madrid, Spain. (Photo by Ricardo Rubio/Europa Press via Getty Images).

This unequal confrontation between an orange obese billionaire climate denialist and a petite autistic Swedish sixteen-year-old climate activist is so incongruous that it begs for a listicle on their differences.

1. a) Trump denies that we have a climate emergency and pulled the US out of the Paris climate accord, branding it “very unfair”.

b) Thunberg sailed across the Atlantic without burning carbon and shamed the elderly diplomats at the United Nations General Assembly for seeking hope from the younger generation that they were by their policies royally screwing over. “How dare you!” she castigated them, for spreading fairy tales of eternal economic growth.

2. a) Trump does not believe in the Conference of the Parties (COP) climate conferences because he hates multilateralism and despises climate legislation.

b) Thunberg does not believe in the COP conferences because “The real danger is when politicians and CEOs are making it look like the real action is happening, when in fact almost nothing is being done apart from clever accounting and creative PR.”

3. a) Trump had to pay $290,000 to the Scottish government when he lost his frivolous lawsuit aimed at stopping a wind farm near his golf course. Some 75% of Scottish electricity now comes from renewables.

b) Thunberg has pointed out that the damage Big Oil and Big Coal are inflicting on the younger generation could be the basis for a lawsuit against the polluters.

4. a) While in college, Trump sought a medical deferment from having to serve in Vietnam owing to what was likely a phony bone spur.

b) Thunberg came to prominence spurring school strikes against inaction on the climate emergency and our continued spewing of billions of tons of carbon dioxide into the atmosphere annually.

5. a) Trump complained that the United States, having invaded Iraq, should not have left without “taking their oil.” Then after withdrawing 1,000 US special forces personnel from the Kurdish region of northern Syria, he was persuaded to send back in 500 of them to Deir al-Zor to “secure the oil.”

b) The secretary-general of the Organization of Oil Exporting Countries slammed Greta Thunberg for “unscientific” attacks on the oil industry, “perhaps the greatest threat to our industry going forward.” So Thunberg is the opposite of Trump — she is accused of not wanting to take their oil or to have anyone take it. Leave it in the ground.

Gee, I’m a Middle East expert and I had missed that Greta all on her own had thrown a scare into OPEC!

Thunberg later on Thursday changed her Twitter information to say, “A teenager working on her anger management problem. Currently chilling and watching a good old fashioned movie with a friend.”