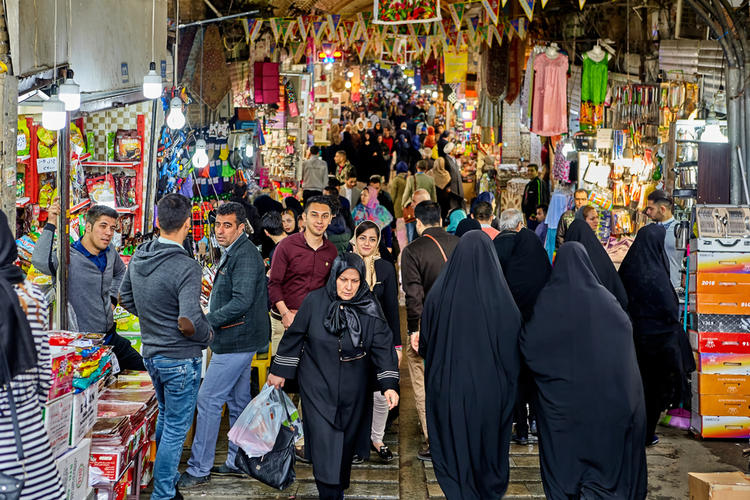 Here are a few illuminating and emotionally resonant pieces by real Iranians on life under sanctions, the brutality of war, and the recent crisis.

Following President Trump’s announcement that the U.S. would seek new sanctions, but not immediate military escalation, against Iran, most people in the United States likely breathed a sigh of relief.

For Iranians and Iranian Americans like myself, that relief was accompanied by a reminder of just how painful existing conditions can be. Sanctions starve our people of food, medicine, and safety while public figures threaten us with more violence. We may no longer be at immediate risk of all-out, open combat, but this is hardly peace.

Every part of the U.S. relationship with Iran feels asymmetrical, and looking through coverage of Iran in U.S. media makes that imbalance incredibly obvious. It’s even been memed: Every few months I see friends share an image from a 1998 interview in which Iran’s then-President Mohammad Khatami refers to Alexis de Tocqueville’s Democracy in America — which he states, perhaps fancifully, “I am sure most Americans have read.”

Iranians (and the rest of the world) are expected to keep up with American news and history — often more so than many Americans themselves. But perspectives from Iranians and Iranian Americans have been largely absent in mainstream U.S. media, or of questionable sourcing when they do appear.

This absence is systemic, a recent analysis from Jadaliyya explained, and allows war hawks like Mike Pompeo and John Bolton to get away with basing the conventional wisdom on foreign policy on shallow tropes.

Fortunately, this absence has also been felt by plenty of Americans, eager to resist more bloodshed in their names. So I’ve compiled a few of the most illuminating and emotionally resonant pieces I’ve come across from Iranians and Iranian Americans, both in the diaspora and within Iran.

To understand the most recent crisis

I was skeptical of most op-eds in the aftermath of the U.S. drone strike that killed Qasem Soleimani. But I knew this New York Times piece from Azadeh Moaveni had struck a nerve in my community when it kept popping up in family WhatsApp chats and across my Twitter timeline.

And for good reason — Moaveni explains why the constant beating of war drums feels “like a civilizational inheritance, a legacy that my mother bore before me, her mother before her, and that I will pass down to my children.”

Many people know of the U.S.-backed coup in Iran that installed a brutal monarch in 1953. More are learning about the time the U.S. Navy shot down an Iranian passenger plane in 1988, at the close of Iran’s war with Iraq, in which the U.S. also provided Iraq with support. These memories, Moaveni says, are ever present in Iranian policy and sentiment towards the U.S. government.

For another frame of reference, read the work of anthropologist Narges Bajoghli, who has done years of field research on Iran’s Islamic Revolutionary Guard Corps.

Her reporting as the Trump administration reneged on the Iran deal shows the frustration and betrayal that have been pervasive since the beginning of this round of the crisis. Her research also means her geopolitical analysis of Soleimani’s assassination is unparalleled.

To learn about the gravity of sanctions

Every time the Trump administration announces a new round of sanctions against Iran, I ask myself: What could there possibly be left to sanction?

Sanctions have an enormous impact on ordinary Iranians. There are the daily indignities — the people who get cut off from Venmo and Slack for non-violations, like traveling to Iran or putting the word “Persian” in a transaction. And then there’s the dangerous — from the restrictions on donations after natural disasters to the impact on health care and the labor market.

To realize how oppressive sanctions can feel when you’re the one living under them, read this piece by the pseudonymous Iranian author Pedestrian, whose writing portrays life in Iran with a nuance and grace I’m not used to seeing in English-language media.

“By adopting the seemingly neutral language of economics and law, sanctions legitimize dehumanization,” they write. To understand why sanctions are an act of war, read more about the weight of caring for your loved ones under them.

To understand life in wartime

After Soleimani’s assassination, people across the United States both joked and worried about impending war.

Instead of thinking of the future, my mind went to the past, to the stories I heard all my life from my family about living through sirens and air raids during the Iran-Iraq war of the 1980s. I’ve heard these stories with increasing frequency over the last few years as friends and family talk more openly about a war would mean for people in Iran.

Presumably this is also the case for Amir Ahmadi Arian, who wrote this matter-of-fact piece for Guernica about the reality of growing up in Ahvaz, Iran, just 70 miles east of the war’s frontline, after the election of Donald Trump. “War, for many well-meaning people I know, is an abstract tragedy,” Arian writes. “They are against the idea of war, but they have very little sense of what a war actually is, how a body in an invaded territory might receive one.”

I’ve spent my whole life watching Iran enter and exit headlines with an uncomfortable frequency, headlines too often accompanied by dehumanizing, Orientalist tropes. Fortunately, these articles are just a small sample of the knowledge and experience of a country of more than 80 million people, who are often reduced to simplistic caricatures.

There’s lots of work to be done to rectify these stereotypes — these are just a few places to start.

Negin Owliaei is a researcher at the Institute for Policy Studies.