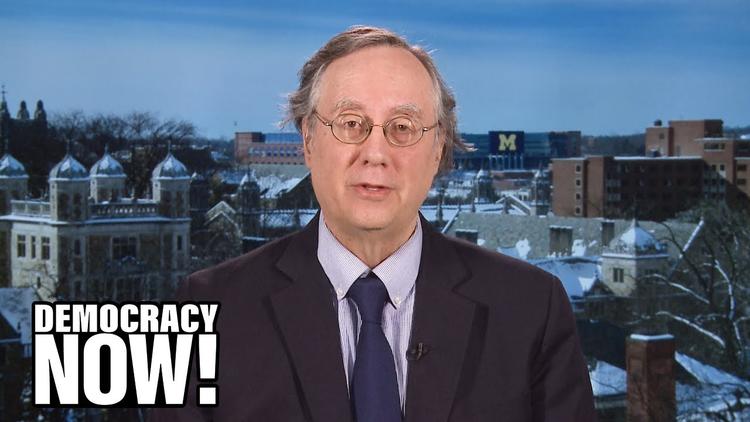 Amy Goodman of “Democracy Now!” interviews Juan Cole, professor of history at the University of Michigan. He’s the author of many books including Muhammad: Prophet of Peace amid the Clash of Empires.

Iran’s retaliatory missile strikes on bases in Iraq housing U.S. troops, following the U.S. assassination of top Iranian general Qassem Soleimani, have dramatically raised tensions in the Middle East. Iran’s Supreme Leader Ayatollah Khamenei called the missile strike a “slap in the face” of the Americans and called for U.S. troops to leave the Middle East. The Iranian missile strikes come just days after the Iraqi Parliament voted to expel all foreign military forces from Iraq. We speak with Juan Cole, professor of history at the University of Michigan.

This is a rush transcript. Copy may not be in its final form.

AMY GOODMAN: This is Democracy Now! I’m Amy Goodman, as we continue to look at Iran’s attack on two Iraqi military bases that house U.S. and Iraqi troops, firing 22 missiles at the bases, no casualties reported. Iran described the attack as “revenge” for the U.S. assassination of Iranian commander Qassem Soleimani at the Baghdad International Airport last week.

We go now to the University of Michigan, to professor Juan Cole, who teaches history there. His blog, Informed Comment, is online at JuanCole.com, the author of many books, including Muhammad: Prophet of Peace Amid the Clash of Empires.

Your response to the Iranian attacks on the Iraqi bases that house U.S. and Iraqi troops, and then, of course, before that, the assassination of Soleimani?

JUAN COLE: Well, both the assassination of General Soleimani and the Iranian response are unprecedented in the past 40 years of tension between the United States and Iran. In fact, the assassination of General Soleimani is unprecedented in general. I lived through the Cold War, and never do I remember the United States assassinating a Soviet general. The two countries were involved in very serious proxy wars and great tensions, but it never went to the point where they would just murder each other’s high officials. So, this is, I think, something that would only be done by an extremely erratic person such as Donald Trump. This is not a normal piece of statecraft.

And that it would elicit an enormous response from Iran was predictable. The response that came, however, did surprise me, because Iran has not tended to act in a direct and open fashion against its enemies. In recent years, it has tended to have a certain degree of deniability in anything that it did. It still hasn’t been absolutely determined that Iran itself struck the Abqaiq refinery in Saudi Arabia in September. There have been tanker attacks that, again, haven’t been directly tied to Iran, although Iran is under suspicion for them. So, I had expected that Iran would work through proxies and try to avoid having a direct fingerprint on this response. That they fired missiles at bases where U.S. personnel were present, even though they appeared to have gone out of their way to avoid any casualties, either Iraqi or American, at least symbolically, takes this conflict between the two countries to a much higher level. It’s spiraling. It’s escalating in very worrisome ways.

AMY GOODMAN: What do you think will at this point happen? Today, President Trump expected to address the nation.

JUAN COLE: The two countries at this point have several choices before them. One would be to leave it at that. There was an assassination, there was a response. The two have been involved in a lot of covert actions against one another. They could go back to doing that. Or it could escalate. President Trump could order missile strikes on facilities of the Iranian Revolutionary Guards, in which case I presume there would be an Iranian response to that, as well. So, these are the two possibilities that are before us, either finding a way to turn to diplomacy and stand down or to escalate.

DEFENSE SECRETARY MARK ESPER: As we defend our people and interests, let me reiterate that the United States is not seeking a war with Iran, but we are prepared to finish one. We are seeking a diplomatic solution. But first this will require Iran to de-escalate. It will require the regime to come to the table with the goal of preventing further bloodshed. And it will require them to cease their malign activities throughout the region. As I’ve said, we are open to having this discussion with them, but we are just as prepared to deliver a forceful response to defend our interests.

AMY GOODMAN: Juan Cole, your response to the U.S. secretary of defense?

JUAN COLE: Well, I just find it very difficult to take this sort of discourse from the Trump administration seriously. They killed one of the high-ranking generals of another country, and then they said they did that to avoid a war or that now is the time for de-escalation? I mean, what world do they live in? This is extremely erratic behavior.

And the fact that someone who’s relatively levelheaded like Mark Esper is going along with it is extremely alarming. I think that the chairman of the Joint Chiefs of Staff should simply have resigned rather than go forward with this attack on Soleimani, which was clearly illegal.

The prime minister of Iraq, who everybody in the U.S. press and among the political class is completely ignoring — this kind of Trump’s insistence on a white hierarchy has turned into a white hierarchy of knowledge, so if a brown person says something, it’s just not entered into the discourse. Abdul-Mahdi made it very clear that he had invited General Soleimani to Iraq to be involved in negotiations between Iran and Saudi Arabia to reduce tensions. Soleimani came on a commercial flight, where the manifest is clear. He checked through Baghdad airport with a diplomatic passport. And then Trump just blew him away, along with several other people, including a high-ranking Iraqi military official.

This is weird. And, you know, one can only imagine that it’s possible that Trump and Esper and Pompeo and that gang didn’t want tensions between Saudi Arabia and Iran to be reduced, and that was the reason for the strike. This cover story they gave up that Suleimani was coming to kill Americans is, you know, falling-down-laughing ridiculous. So —

AMY GOODMAN: And now they just refer to him as a “bad guy.”

JUAN COLE: Now they — and you see major journalists and television anchors talking about him as a bad guy. What kind of — this is not journalism; this is just war propaganda.

AMY GOODMAN: Let me ask you what Garrett Graff, the journalist, tweeted yesterday. He said, “Reminder that as this crisis escalates, we have no Director of National Intelligence, no Dep Dir, no Homeland Security Secretary, no Dep Sec, no head of CBP or ICE, no State Dept Under Sec of Arms Control, no Asst Sec for Europe, and no Navy Sec.”

JUAN COLE: The Trump administration is a hollow shell. Six high Pentagon officials have recently resigned, partially because of Trump’s erratic behavior. It’s extremely worrisome that a person with, it seems to me, clear personality deficits is the commander-in-chief of the United States and actually, you know, can launch nuclear weapons. So, that he is engaging in this kind of escalation is extremely worrisome.

The other thing that the American public is not generally being told, although it sometimes comes out a bit, is that the United States has Iran under a financial blockade of unprecedented proportions. Iran is being sanctioned to a degree that no country has ever been sanctioned in peacetime. In essence, you know, if you drew up a naval blockade to prevent Iran from trading with other countries, that would be an act of war in international law. The Trump administration has done this through financial means. It’s gone to Japan, South Korea, India, said, “You may not deal with Iran. You may not buy Iranian petroleum.” So Iran’s petroleum receipts have plummeted. That was 70% of their income, from two-and-a-half million barrels a day to 500,000 barrels a day. The country is being economically strangled. And that is the reason for which we see all of this tension and violence. Trump already has been at war with Iran for 19 months.

AMY GOODMAN: Can you respond to the contradictory messages from the Pentagon and the White House? Monday, the U.S. Command in Baghdad issued a memo to the Iraqi government appearing to suggest the U.S. would withdraw U.S. troops from the country, this after the Iraqi Parliament’s vote to expel U.S. military forces, but, hours later, Defense Secretary Mark Esper said the U.S. is not withdrawing troops from Iraq?

JUAN COLE: Well, again, it’s just typical Trump administration dysfunction. CENTCOM, the Central Command in the Middle East, knows very well that the United States troops have to leave Iraq now. The Parliament voted. It wasn’t an advisory vote. The Parliament voted that the Iraqi government should take steps to expel U.S. troops. And that resolution that Parliament passed was presented to them by the prime minister. It was an act of the executive to have the vote. So, the Trump administration is trying to depict it as a mere advisory vote. It wasn’t. It was a vote of Parliament, and the executive asked for the vote and will now — and Prime Minister Abdul-Mahdi has said that he takes the letter from the U.S. military at its face value, which was that the U.S. was preparing to leave.

The United States troops can’t be in Iraq if the Iraqi government doesn’t authorize their presence, because it would open them to lawsuits. Every time they got involved in a firefight, if somebody was killed, those people could haul U.S. troops before an Iraqi judge. They could be executed for murder. So, the U.S. troops will have to leave. And I think the Iranian strikes on those bases were partly to encourage the Sunni Arabs and the Kurds, who are dragging their feet on this matter, to agree that the U.S. troops should leave, because they don’t want to be in the middle of a crossfire between Iran and the United States.

AMY GOODMAN: Well, Juan Cole, I want to thank you for being with us, a professor at University of Michigan, speaking to us from Ann Arbor.

Via Amy Goodman of “Democracy Now!”

The original content of this program is licensed under a Creative Commons Attribution-Noncommercial-No Derivative Works 3.0 United States License. Please attribute legal copies of this work to democracynow.org. Some of the work(s) that this program incorporates, however, may be separately licensed. For further information or additional permissions, contact us.